“Technology embodies a set of values,” opened Internet Archive’s Director of Partnerships, Wendy Hanamura, in Ethics of the Decentralized Web & Uses in Humanitarian Work, the final session with METRO Library Council and Library Futures. “What values drive our current web?”

While most of the audience responded by discussing web monetization or opined about lack of privacy, many still believe in the power of the internet for better sharing. As we build a new web, most would like for it to be driven by a different set of values, particularly community, collaboration, freedom, sovereignty, democracy, and trust.

Beginning with Mai Ishikawa Sutton’s work on the five principles of the DWeb and ending with a demo of the Mapeo project, this session brought in designers, coders, policy professors, and ethicists building a new “web for the people” that would embody the above values, and much more. 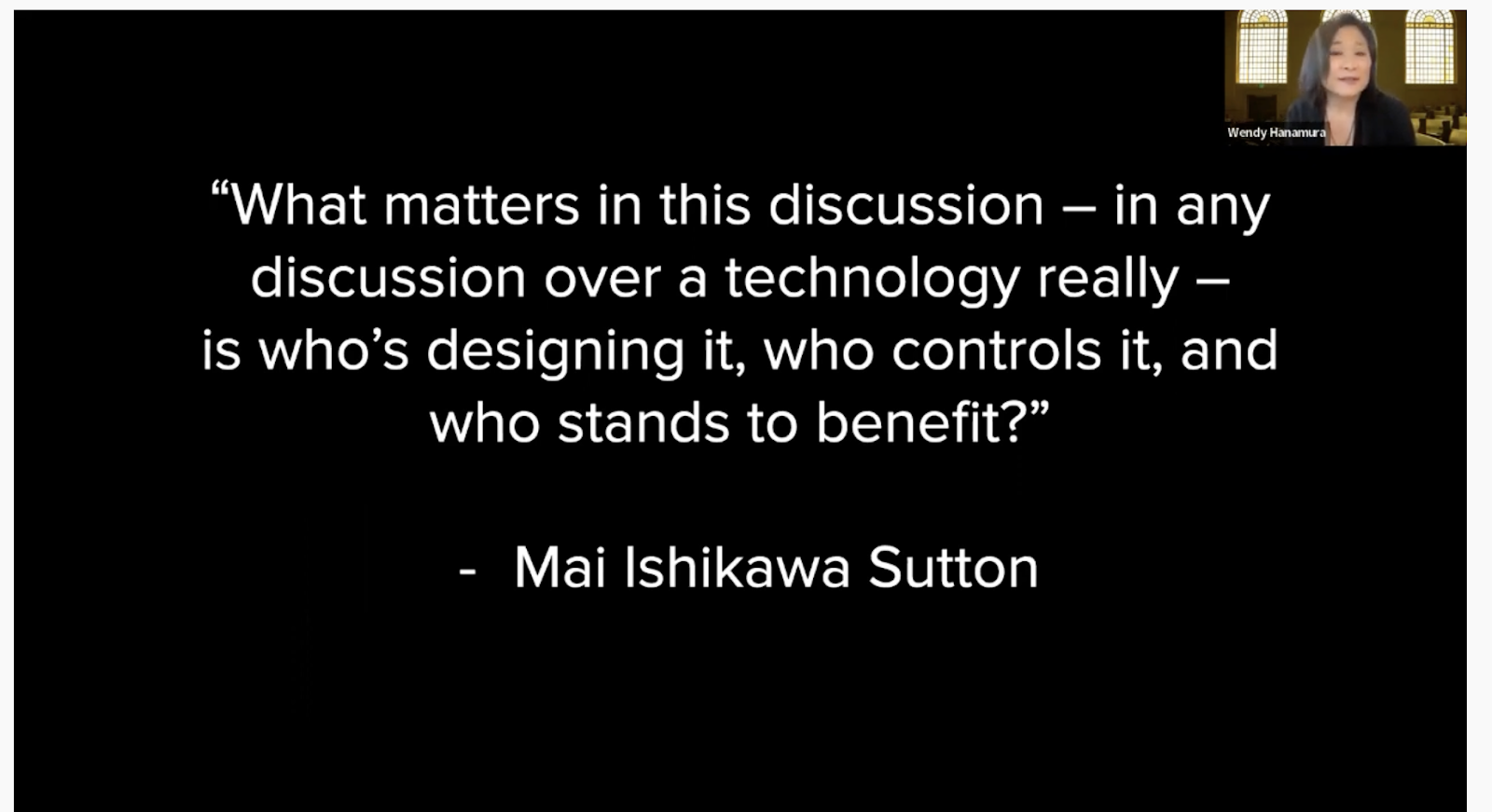 In 2016 at a campout in California, Sutton and a community of technology enthusiasts came together to rethink the values embedded in the technology of the web we use and the web we could build. While technology was a major factor in the resulting work, ethical considerations and standing for better technology were just as crucial. They created a document that reflected the interests and values of their community with five principles:

The group hopes to revisit some of these principles this summer at DWeb Camp 2022 to better define the “web that we want.” In the Q&A with Hanamura, Sutton clarified the ways in which the DWeb addresses crucial aspects of power, control, and capital. Rather than staying static or solely basing itself in technological innovation, the DWeb community is a way to ensure that benefits “flow back into the community.” 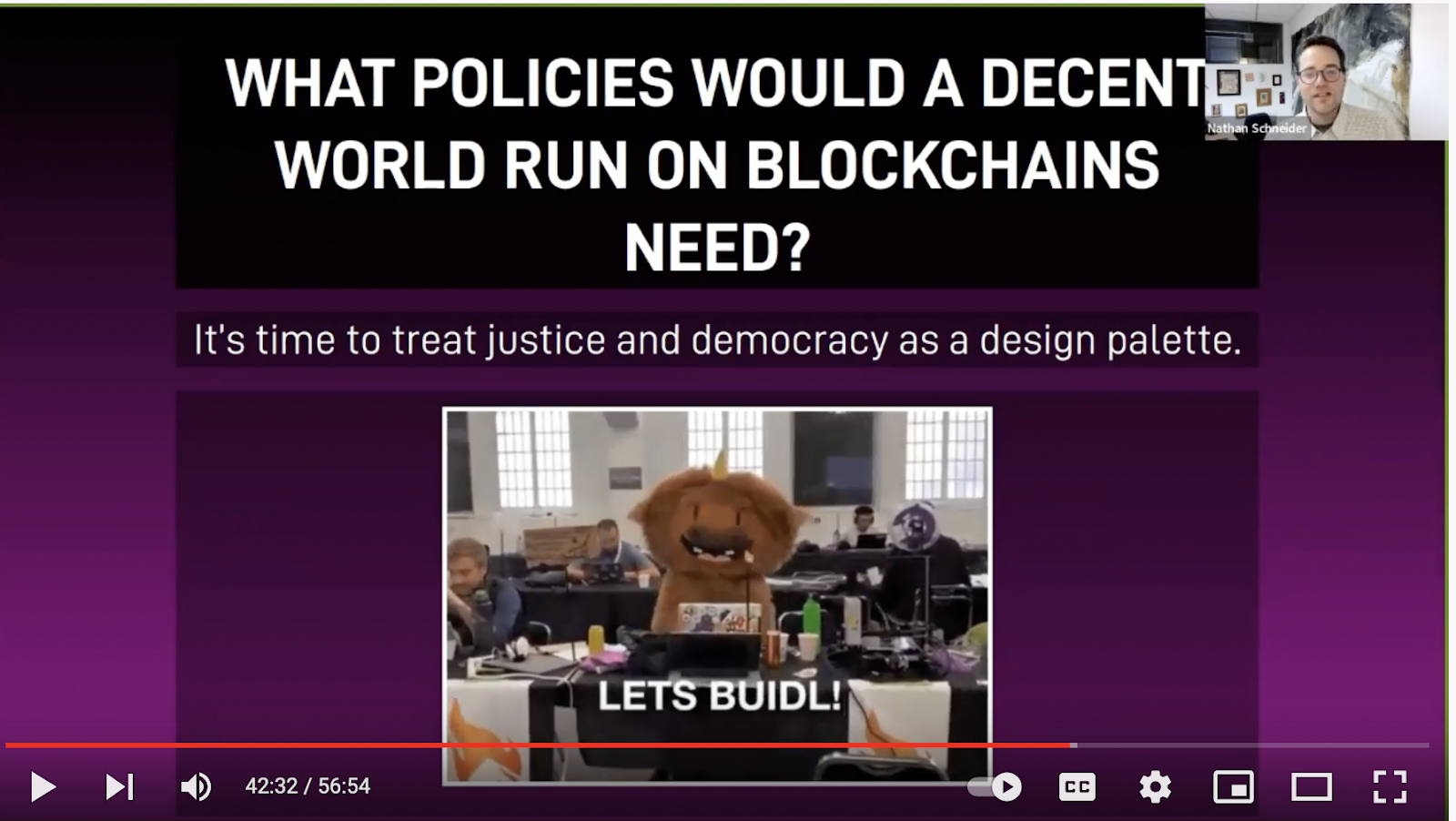 Author and Professor Nathan Schneider followed Sutton to discuss how human rights can be encoded into the blockchain. Schneider’s presentation, “Policy Proposals for Less Dystopian Crypto Protocols” began with a recognition of the issues within blockchain, stating that he wishes to explore how crypto can be “up there with libraries” in terms of building “true civic institutions.” Faced with the dystopia of the current web and recognizing that it could perpetuate the same harms, crypto could present a new form of economic democracy and pluriverses for all. For Schneider, “if code is law,” there are a number of policy proposals that can support a better crypto future. These include building sufficiently decentralized systems, transparent governance, labor over capital, taxation for public goods, reparations, provable zero-carbon, and human rights fail-safes. For his community, this is not about “catching up” to institutions as we know them, but instead doing the work to build a more humane world.

Following Schneider, Luandro Vieira of Digital Democracy demoed his project, Mapeo, a decentralized app built with and for communities. Mapeo is a mobile application that provides free and accessible geospatial technology that is translatable, designed for community, private, and available offline. Originally built for earth defenders, or marginalized people at the front lines of defending their land around the world, Mapeo is highly customizable and used mainly by indigenous people in 16 countries. It is used to map and monitor threats from invasions, mining, logging, and oil activities. Mapeo’s power was demonstrated through the #WaoraniResistance, which protected 1/2 million acres in the Amazon and jeopardized a 7 million acre oil auction.

Through the lens of these three activists and experts, the promise of the DWeb was clear. A new, highly democratic web is possible, but it will take all of us to build it.

2 thoughts on “Mapping Principles for a Better World: Ethics of the Decentralized Web & Uses in Humanitarian Work”