This week we explore cutting edge work by Joostware that moves us closer to solving the challenge of searching vast archives of video by speaker, note the use of TV News Archive data by The New York Times and Axios, and share a fact-checked interview by exiting House Speaker Paul Ryan about his legacy.

What if you wanted to search the TV News Archive to find every instance where President Donald Trump is talking?

That’s the research question that the San Francisco-based firm Joostware concentrated on for its Who Said What project, which won a $50,000 prototype grant from the John S. and James L. Knight Foundation. Last week Joostware’s founder, Delip Rao, presented the project’s progress at a gathering in Austin, Texas. (The Internet Archive’s own Dan Schultz, in his Bad Idea Factory incarnation, also presented on Contextubot, which we recently profiled here.)

“Audio and video today is viewed as an opaque object and it’s meant for linear consumption,” Rao said in his presentation. “But truly any audio and video especially in the context of news has a lot of structure to it. There are speakers of interest, and these speakers take turns, and then within each turn something was communicated. So our goal is to identify these speakers who are of interest and also the content that was spoken in that turn and indexing that.”

Anyone can search the TV News Archive already via closed captions at the Internet Archive or via Television Explorer. Our experiments with facial detection and chyron extraction are another way to find and analyze news clips. But searching a video archive by “speaker id” – finding all the video where a person is actually talking – is a tough technical challenge. Our Trump Archive and congressional, executive branch, and administration archives are all manually curated video collections designed to demonstrate what it would be like to have automated speaker id search.

Joostware researchers have made progress toward this goal. They took material from the Trump Archive, and used it to train a model that recognizes the president’s voice, by using properties of the voice signal. They created a prototype search software that is more than 95% accurate on a human annotated dataset in returning video clips where Trump is actually speaking.

What’s next? With more resources, Joostware hopes to give this technology back to the Internet Archive to improve search within the TV News Archive. And Rao and others continue to work within the larger community of researchers working to crack the code of video to help fact-checkers and journalists hold power accountable.

No one is talking about tax law on cable TV news

“Consider one of Mr. Trump’s preferred yardsticks: cable news coverage. Throughout the fall, as Republicans rushed their tax bill through Congress in two breakneck months, CNN, Fox News and MSNBC routinely devoted 10 percent of their daily coverage to tax issues, according to data from the Gdelt Project. Interest spiked as Mr. Trump signed the bill in late December, and then it fell precipitously.” For Axios, Caitlin Owens used TV New Archive data with GDELT’s Television Explorer to shed light on whether the TV networks are paying attention the priorities of the political parties: “Tax cuts and the Affordable Care Act are supposed to be big issues in the midterm elections, but both have faded from the attention of the cable news networks now that they’re no longer front and center in Congress.” Owens thinks it matters because “Democrats are campaigning hard on the GOP’s unpopular attempt to repeal and replace the ACA, and Republicans are pushing the financial benefits of their tax law.” 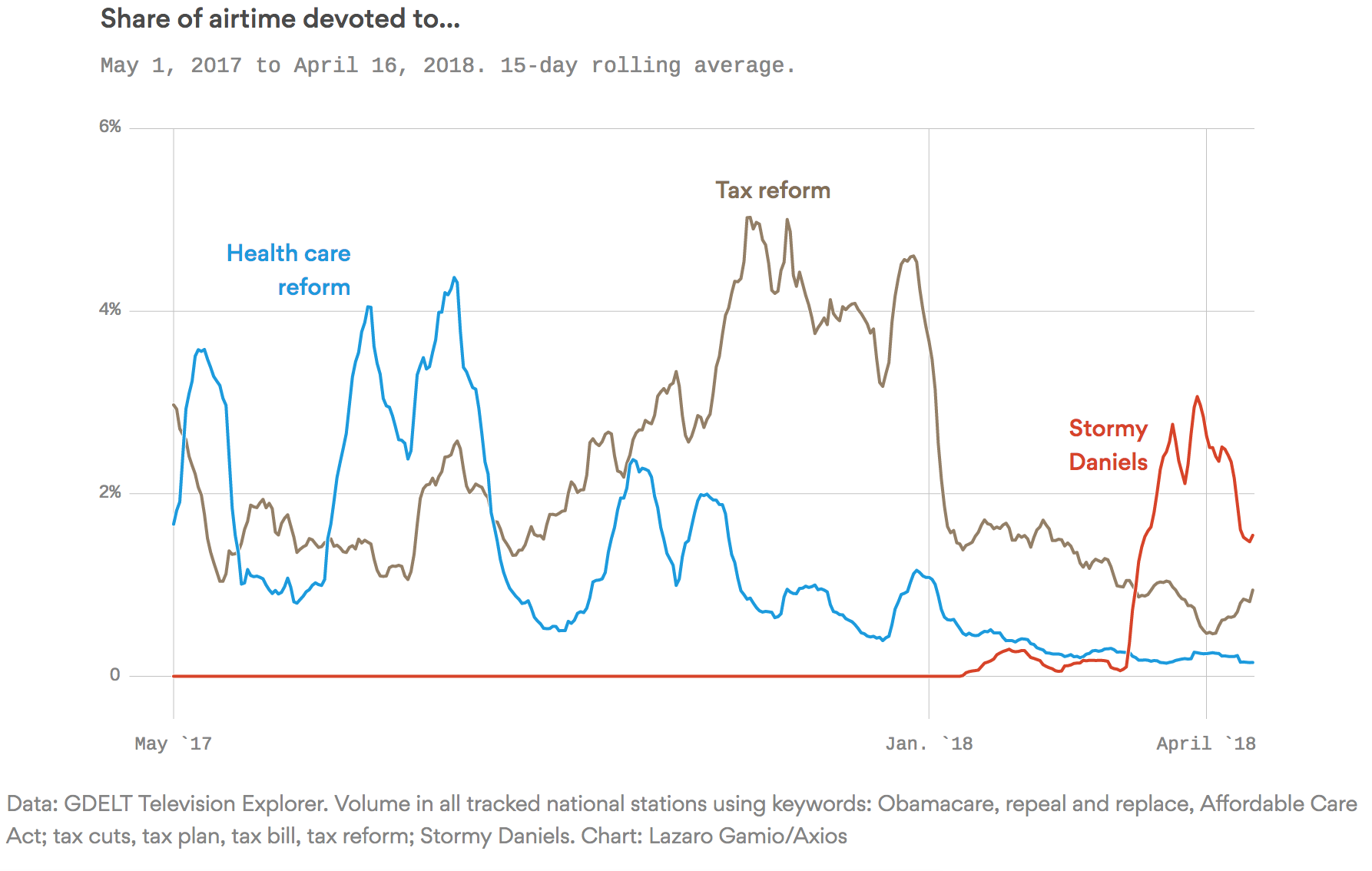 House Speaker Paul Ryan, R., Wisc., announced last week he would not be seeking reelection, prompting television interviews that reflected on his legacy. In a “Meet the Press” interview Sunday on NBC, host Chuck Todd asked Ryan to respond to a statement by Sen. Bob Corker, R., Tenn.:

“’This Congress and this administration likely will go down as one of the most fiscally irresponsible administrations and Congresses that we ever had.’ And he’s referring to the fact that this tax bill spiked the deficit. It’s higher than even what was projected.” Ryan responded “That was going to happen. The baby boomers’ retiring was going to do that. These deficit trillion-dollar projections have been out there for a long, long time. Why? Because of mandatory spending, which we call entitlements. Discretionary spending under the CBO baseline is going up about $300 billion over the next 10 years. Tax revenues are still rising. Income tax revenues are still rising. Corporate income tax revenues. Corporate rate got dropped 40 percent, still rising.”

Eugene Kiely reported for FactCheck.org that “Ryan is right that $1 trillion deficit projections ‘have been out there for a long, long time…But corporate tax revenues are down for the first six months of the fiscal year, and they are projected to be less over the next 10 years than they otherwise would have been because of the law.”

Salvador Rizzo and Meg Kelly reported for The Washington Post’s Fact Checker, “The baby-boom generation is retiring, and Congress at best has taken only modest steps to rein in spending on old-age programs, largely because any serious effort is met with hostility and often-misleading attack ads…But the revenue side of the picture cannot be ignored.” “Congress has not been able to grapple with the spending — and  keeps taking steps to undermine the revenue flow as well.”