In search of unusual items at Archive.org… 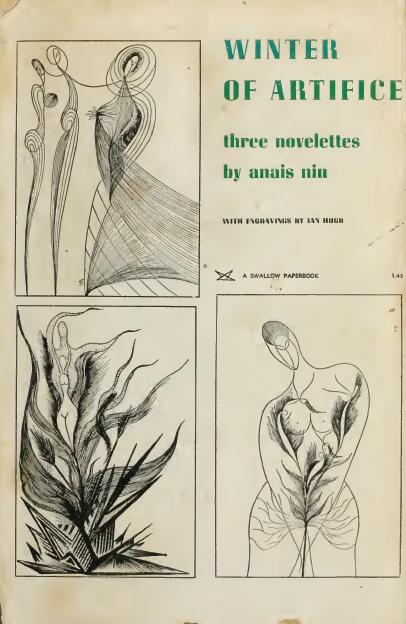 1) Anaïs Nin – Winter of Artifice, a collection of three short novels: Stella, Winter of Artifice, The Voice, with engravings by Ian Hugo. Some of the historical data surrounding this book is unclear. This was Nin’s second fiction book, originally published in Paris in 1939, the same year she moved to New York. The edition here was published by Alan Swallow, 1945. The book was written while Nin was undergoing treatment with the psychoanalyst Otto Rank (frequent traveler between France and America), with whom she had an affair. The 1939 edition contained the novella Djuna, which was supposedly omitted from later editions because it revealed too much of her relationship with Henry Miller and his wife June (In The Voice, the lead character is named Djuna). Nin was probably in her mid-thirties when the book was written.

The atmosphere of The Voice, with Nin’s surreal descriptions of urban fragmentation set in the fictional Hotel Chaotica, brings to mind the Kienholzes’ installation The Pedicord Apts. (1982 – 83; at the Weisman Museum, Minneapolis), a recreation of a seedy postwar rooming house where visitors can eavesdrop on the individual dramas behind each apartment door. The protagonist Djuna is a mysterious woman who, under the care of a psychoanalyst known as the “Voice,” finds herself struggling in an emotional storm, hypersensitive to the minutiae and flux of life. Another patient, Lilith, later becomes the focal point, appearing to represent another aspect of the narrator, as Djuna’s lover, or maybe they are the same woman. Throughout the book there’s a theme of the search for a father figure – is it the Voice, or will he too be compelled to recount his inner experience?

Excerpt from The Voice, Djuna speaking:
“I have the fear that everyone is leaving, moving away, that
love dies in an instant. I look at the people walking in the street,
just walking, and I feel this: they are walking, but they are
also being carried away. They are part of a current. Each
moment that is passing takes them somewhere else. I confuse the
moods which change and pass with the people themselves. I see
them carried into eddies, always moving out of some state they
will never return to, I see them lost. They do not walk
in circles, back to where they started, but they walk out and
beyond in some irretrievable way – too fast – towards the end.
And I feel myself standing there; I cannot move with them.
I seem to be standing and watching this current passing and
I am left behind. Why have I the feeling they all pass like the
day, the leaves, the moods of climate, into death?”

2) Charlie Chaplin – One A.M. (1917; 17 mins.) Many know Chaplin’s feature films, such as The Gold Rush, City Lights, Modern Times, etc., while the shorts are often overlooked. There’s a famous Chaplin quote: “All I need to make a comedy is a park, a policeman and a pretty girl.” In this film he used almost nothing – a house stage, some props. The “story” concerns a man arriving home late at night; he’s had too much to drink and he needs to get from the taxi cab to his bed. By today’s standards it isn’t hilarious. In many of his films Chaplin’s funny faces can induce a smile, but here there’s only one close-up of a straight reaction shot. And from a contemporary point of view, there’s a sense of minimalism and repetition in the film as it runs through an imaginative inventory of obstacles. One striking aspect of this 90 year old film, aside from the stunt work, is the way the inside of the house becomes animated, like a fun house, where, in accord with the hero’s inebriated state, defamiliarized objects slip away, come to life and strike out, the environment becoming mutable, as if the intention was to create something like scenes that later appeared in the Dave Fleischer Betty Boop cartoons, using the available means of the day. If, by the conclusion, the character has finally arrived at his destination, there’s a sense that the film could just go on indefinitely, stuck in a hypnotic loop, as a testament to cinematic imagination, the physical world’s resistance to will, zero degree special effects and the film’s timelessness. (The item contains links to many other Chaplin films on Archive.)

The Grateful Dead – Dark Star (2.26.1973; starts at 48 min. mark; about 25 min.) Their improv classic, from one of the many well-crafted “Dead Air” programs, with host Uncle John. Dark Star never appeared on a full-length studio album. It was originally released in 1968 as a 2:50 minute single and later became a lengthy concert favorite. Lyrics: Reason tatters / Forces tear loose from the axis / Shall we go / You and I while we can? / Through the transitive nightfall of diamonds.

Some musicians have authorized sharing of amateur recordings of their concerts and collection sites have been created on Archive. Once you’re on the collection main page for an artist, click “See recent additions” to view all items. Sample by using the stream player on the right, or if no player is available, clicking the M3U file on the left under “Stream” should bring up RealPlayer or iTunes. You can also download the songs as MP3s or other file formats. Here are some personal favorites (see also previous blog entry):

Crap from the Past – “Since October, 2002, Crap From The Past has aired on Friday nights from 10:30 – midnight on KFAI, 90.3 FM Minneapolis, 106.7 FM St. Paul. It’s also rebroadcast on various other affiliates around the world.” A terrific mix of rock/pop/soul. Many programs and new additions.

Dane Rudhyar – Autumn and Third Pentagram, two pieces for piano performed by Edmund Correia, 1981 (from Other Minds collection; date of composition not given). Rudhyar (1895, Paris – 1985, Palo Alto, CA) was a modernist composer and pioneering author on astrology. He was self-taught as a composer, created a technique he called “orchestral pianism,” published a book on Debussy, arrived in America in 1916, published a poetry book in Canada, relocated to Hollywood and appeared as Christ in the silent version of The Ten Commandments, developed an idea for “Introfilms” portraying inner psychological states (never realized), won a composition prize, published a book on Hindu music; after 1930 devoted his time to astrology producing a landmark book, then later to non-representational painting and the orchestration of his early piano works. (See: Slonimsky.) He believed himself to be a medium when composing and, rather than producing “works,” the results present the flow of psyche; however the monumental style has more in common with his contemporary Carl Ruggles than, say, Charlemagne Palestine. 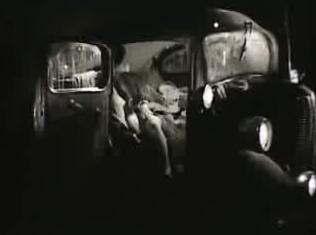 5) June Steel – Kienholz on Exhibit (1969, b&w film, 21 min., AFANA collection) – Step back in time for a tour of the junk environments of Ed and Nancy Kienholz at the LA County Museum of Art. The film documents the patron response to the exhibit, as much as the exhibit itself. Back Seat Dodge (photo) was conceived as a piece with popular appeal, a voyeuristic setting of a plaster woman and chicken wire man making out in the back of a dilapidated auto amid empty beer bottles and scraps of underwear. It was initially greeted with civic threats and mixed public reaction, and for a time the LACMA pledged to keep the car door closed to minors. It’s something like a room from the Pedicord Apts. on wheels, or an Origin of the World/Etant Donnés framed in an Ubik-ian shell. The film also features a nice post-Beat vibe throughout.

6) Bertolt Brecht – House Un-American Activities Committee hearings (1947; Audio; 24 mins.)
In 1947, during the Cold War, Brecht was called to appear before the congressional committee and account for his communist sympathies. The questioning concerns meetings, trips to Moscow, publications, and culminates in a dispute over the correct translation of a song lyric. Consider this a short work of audio theater. The day after his testimony Brecht left for East Germany. (Did I read somewhere that the HUAC hearing scene with Woody Allen in The Front, 1976, was loosely based on Brecht’s testimony?)

Evasions of Power (2007, 6 audio files, 10 hours total) – a conference in Philadelphia at the Slought Foundation, exploring “relations between architecture, literature and geo-politics.”

On the Politics of Resistance (2007, video, 1 min.) – One minute clip of philosopher Alain Badiou.