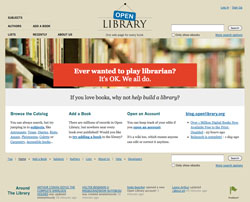 Yesterday I posted about the new Open Library Accessible Books service. Today I’d like to bring some attention to the wonderful redesign of Open Library that was also launched yesterday.

Beside having a great new look there are some cool features (from a post on Open Library (http://blog.openlibrary.org/2010/03/17/announcing-the-open-library-redesign/):

Works
The previous version of Open Library was only aware of editions of books, or “manifestations” in FRBR-speak. We’re excited to release Works, which helps catch all editions of the same book and collect them all under this one umbrella. Each work also has its own URI too – we’re hoping these propagate.

Note that our representations of Works is imperfect. We’re the first to acknowledge that there are lots of duplicate edition records in Open Library, and these dupes clog up our ability to derive or create works from editions. That means that we might have 25 Jane Eyres for a while, and that the next logical feature to release is a way for people to help merge things.

Subject pages
We wanted to find a way to help people browse the catalog rather than having to know what they’re looking for before they start. So, we’ve gone through a process of breaking down and reconstructing the subject headings on our records, giving each heading a URL, and displaying a whole bunch of data about each heading: works about that subject, publishing history, related subjects, authors who write about it, and publishers who publish in that subject area.

Revamped search
We’ve rewritten search from scratch and upgraded to SOLR 1.4. Our ranking is very basic for now, so “relevance” doesn’t mean a lot yet. We can’t wait to improve on it, and in the meantime, you can also sort your searches by the number of editions, when things were published, or filter using facets.

UI Improvements
The whole site’s had an overhaul in terms of the user interface. All the major operations (editing, searching, adding covers etc) have been redesigned. Even changing the size and position of the Edit button will hopefully make it clearer that these records are open to correction. We’ll be blogging over the coming weeks with specifics about the user interface enhancements.

Links, link, links
Another major component of the redesign is to begin the process of connecting our records to other references out there on the interwebs. If you get to an Edit Edition page, you’ll notice that you can add different identifiers from a variety of systems to the Edition record, and even add a new type of identifier to the system. The more IDs we can collect, the more connections there’ll be into and out of Open Library.

Caveats!
The redesign is just out of the oven, so it’s important to be clear that there are still things missing, unclear, coming soon, or potentially even broken:

The API
A lot of the revisions we’ve made to the API are undocumented. We’re looking forward to changing that, and will update you as we do. We’d also like to expand the range of ways you can write to Open Library via the API.

The Data
Now that we’ve improved on the ways to browse the Open Library catalog, we’ve exposed a lot of the corners and content in there that may never have seen the light of day, or are just plain wrong.

It might be odd to say, but we sympathize with Google’s recent position on metadata quality. Trying to merge records from lots of different catalogs means there will be duplicates, and that any errors in those different catalogs are imported as well. That’s not to say we’re not happy with what we’ve got at this first stage. Edward has done a fantastic job to get this far, and we’re looking forward to continual improvement of the dataset.

The fun thing — the best thing? — about Open Library is that you can correct any errors you come across, and those corrections can be propagated.

Please go and explore the new Open Library. This is just the beginning!

More information on each team member’s contribution is at http://openlibrary.org/about/people