With the U.S. Census Bureau beginning to release statistics from the 2010 census. It seems a good time to mention that Internet Archive has a complete set of the available U.S. Census back to the first one in 1790:

San Francisco, CA –Internet Archive has announced that a publicly accessible digital copy  of the complete 1930 United States Census – the largest, most detailed census released to date – is available free of charge at www.archive.org/details/1930_census. Previously, 1930 Census records were accessible only through microfilm, or subscription services in which select portions of data are provided for a fee. 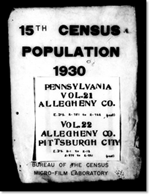 The 1930 Census records are being made available online through a collaboration with the Allen County Public Library Genealogy Center in Fort Wayne, Indiana. In the coming months, complete census records from 1790 through 1920 will be made available as part of Internet Archive’s growing Genealogy Collection.

“Internet Archive is pleased to be working on this important collection with the renowned Genealogy Center of the Allen County Public Library,” said Robert Miller, Internet Archive’s Director of Books. “There is tremendous value in seeing the original census source documents without filtering and third-party interpretation of the information. For historical researchers as well as those individuals who are simply passionate about history and genealogy, access to these materials is critical to understanding the past and assessing how the past impacts the present, and how it can shape our future.”

Taken just five months after the Wall Street crash of October 29, 1929, the 1930 Census was the fifteenth census of the United States and includes 2,667 microfilmed rolls of population schedules with names and statistics of more than 137 million individuals. The 1930 Census became available to the public on April 1, 2001. By law, census records are restricted for 72 years.

Information contained about individuals in the 1930 Census includes:

“The 1930 Census represents the zenith of data collected by federal enumerators,” said Curt B. Witcher, Allen County Public Library Genealogy Center Manager. “Having it online for free will allow access for anyone at any time – the classroom teacher who wants to show interested students what an older census looks like, the local historian wanting to study everyone who lives in a particular township or village, the genealogist wanting to search for families missed by indexers. Millions of individuals will benefit from this resource. What a fortunate circumstance to have this historic census widely available in this census year of 2010.”
_______________________________________________________

Note: There is an interesting backstory to the missing 1890 census:

http://en.wikipedia.org/wiki/1890_U.S._Census
“The Eleventh United States Census was taken June 2, 1890. Most of the 1890 census was destroyed in 1921 during a fire in the basement of the Commerce Building in Washington, D.C. In December 1932, according to standard Federal record keeping procedure at the time, the Chief Clerk of the Bureau of the Census sent the Librarian of Congress a list of papers to be destroyed, including the original 1890 census schedules. The Librarian was asked by the Bureau to identify any records which should be retained for historical purposes but the Librarian did not accept the census records. Congress authorized destruction of that list of records on February 21, 1933 and thus the 1890 census remains were destroyed by government order by 1934 or 1935.”