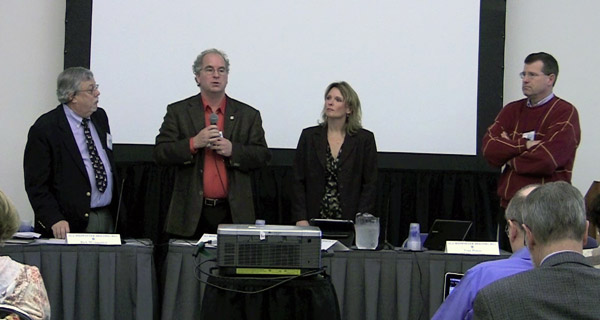 You can watch video of the panel discussion at http://www.archive.org/details/alamidwinter2011. There is also an HD version.

A nice writeup of the conference held in San Diego, CA on January 8, 2011:
At ALA Midwinter, Brewster Kahle, Librarians Ponder The E-book Future

‘“The e-book thing isn’t happening,” Kahle, noted “it has happened.” Kahle, who founded the Open Content Alliance, and Open Library project, a digitization program, offered a strong message to librarians: don’t let a few powerful corporations take control of the digital future. He expressed his longstanding concern over Google’s efforts to scan collections “and sell it back to us,” and urged libraries not to give up their traditional roles. “What libraries do is buy stuff, and lend it out,” he said, suggesting that libraries “digitize what we have to, and buy what we can,” but not to let the promise of licensed access turn libraries into agents for a few major corporations. “We do so at our peril.” He also urged more dialogue with publishers and vendors about the future of digital content and the role of libraries—but he also urged bold action.’

1 thought on ““The e-book thing isn’t happening, it has happened.””