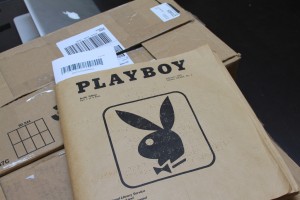 Hi. I’m Jason Scott, adjunct archivist at archive.org, and I wanted to talk about the time I watched the Internet Archive scan in a Braille issue of Playboy magazine.

Many people might not know there have even been Braille editions of Playboy, but they’ve been printed since 1970, a function of the National Library Service for the Blind and Physically Handicapped (NLS) , which puts out a variety of transcribed versions of periodicals and books and other materials, in forms such as digital text, mp3/spoken, and of course Braille. The service has been going on since the 1930s, and makes these materials available to a wider audience than might otherwise get access. (In the 1980s, an attempt was made to drop the magazine, but it was re-instated after a court battle.) A friend of mine, Thomas Dell, had a copy and I brought it to the Archive, where we decided to scan it in.

For many folks, the Internet Archive is the group that houses the Wayback Machine, a miraculous petabytes-large collection of archived web pages that show progression of the World Wide Web since the 1990s, a browsable museum that grants near-instant access to over a decade and a half of information, much of it located nowhere else. To make this marvel work, a lot of engineering, planning and coding has gone into place, much of which is not instantly obvious as you go looking for that special page you saw once but which is now gone.

But the Archive is also the location of much more, including what I want to talk about today: an amazing, globe-spanning book scanner operation that is currently bringing in a fantastic amount of scanned books from a huge variety of sources. What rates as a fantastic amount? Try over one thousand books a day. Checking the internal statistics, I see an average of 47 books added every hour for the last year, which means a book is being added to the archives every 90 seconds.

How is this possible? I figured I’d find out.

So, I took my copy of Playboy and brought it over to the scanning center, where I was greeted by an impressive array of equipment and staff who can bring in so much so quickly. 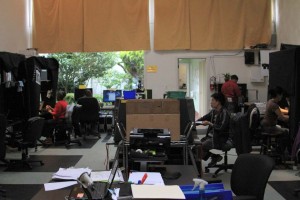 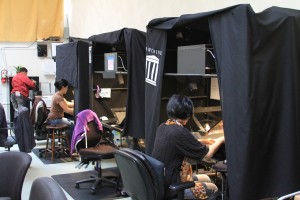 There are lots of these scanning centers affiliated with or run by the Internet Archive worldwide, often in alliance with libraries or academic institutions, bringing in a whole range of materials – not just books. Audio, video, microfiche and a few other mediums are being brought in via a very well engineered combination of machines, processes and trained staff. This link gives a lot of information if you’re a group who has a bunch of books to scan in and want a great open service to work with.

There’s a bunch of incoming material to these scanning centers, and items patiently wait next to the equipment for their big chance. On another side of the room are the items on their way out, where they’re being made available for auditing, quality control and verification. Eventually these books might go back to donating institutions or to the Physical Archive, the recent addition to the Internet Archive’s family of projects. They’ll go into deep storage should the originals be needed again. 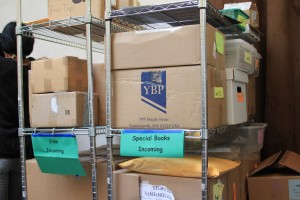 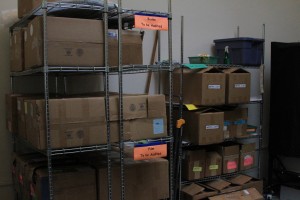 Venus, who was running the shift that day, allowed me to jump this queue with my strange little artifact (Officially “Playboy:Braille Edition, February 1992, Part 3 of 4, Volume 39 Number 2”) and run it through the scanning process.

It had already been assigned a unique identifier, playboybraile00nlsu, which makes it easy to find later, account for, and find on the web afterwards. A barcode reader at the scanning station assures it’s in the system. 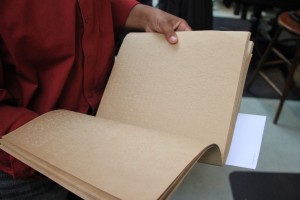 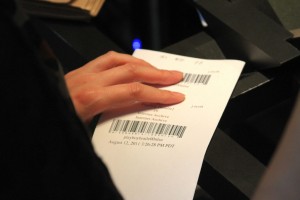 The setup took longer than the majority of books do because these Braille issues are oversized, an odd color (kind of a paper bag consistency) and more like a newspaper stapled through than a standard binding. This was very informative, because the crew has a variety of tests and tools to make sure the scans are as good as they can be, including foam bracing, dowels, and shims. They tried a variety of approaches before settling on one. 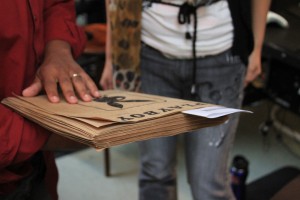 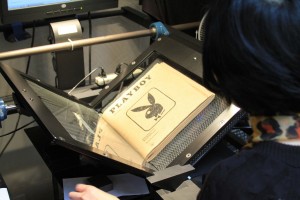 Once the arrangement had been decided on, the calibration worked out, the lights adjusted and the process begun, it went very fast – this 98-page book was scanned in less than five minutes, and I only got a shot or two of the process. The Scribe system works very efficiently and someone trained with the system can work smoothly, with no damage or stress to the book or binding. Good thing, too – while the Playboy is only 19 years young, some of the books scanned have been around for centuries and wish to continue to do so. 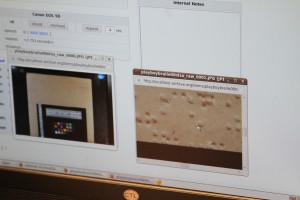 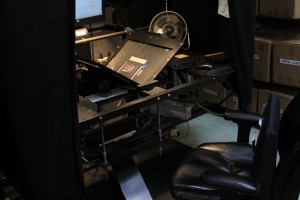 Personally, this little note on the machines does it best to bring it home for me,  reminding that the goal is to scan one thousand pages an hour, and to shoot for eight thousand pages a day. Now imagine the multiple stations in this location, and the locations all over the world, and you begin to see how much is being done here. 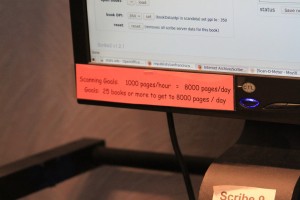 I took back the Playboy and a few hours later, after a process of deriving the original scans into a whole host of convenient formats such as PDF, DjVu, and Epub, a Braille version of Playboy can now be seen on archive.org.

Now, I will be the very first to admit – the result is pretty silly. You’ve got something that needs to be read by touching it, which can’t be touched, and the two-sided indentations on the paper means it all looks pretty darn strange. So on one hand, it all can seem pretty useless. 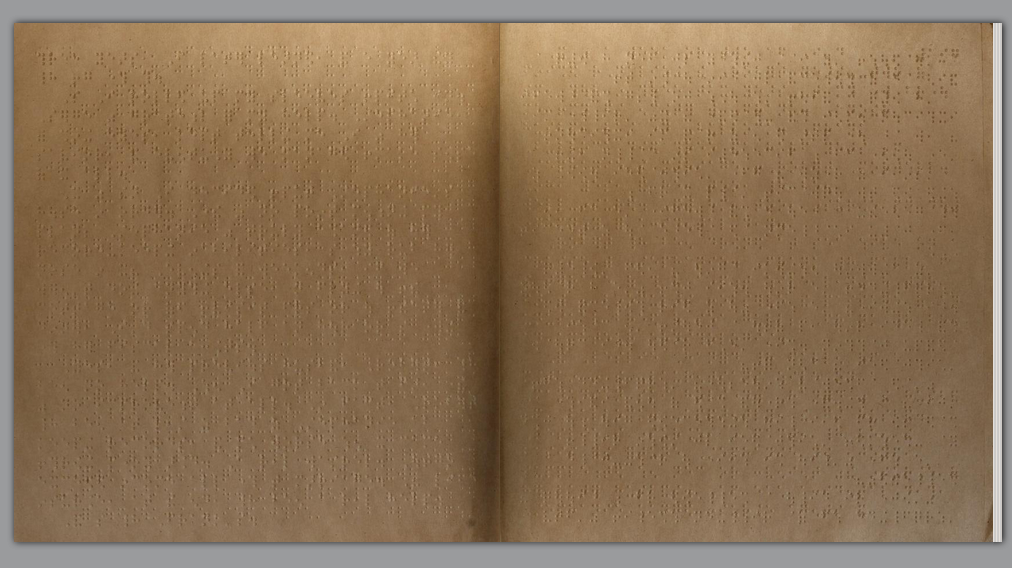 But what can we learn by clicking on the link? Well, we find out that this sort of thing exists at all, and why, and what it looks like, and how Braille can be printed on both sides, and that it would take four copies to produce the text of a single issue… and that apparently, there’s no centerfold.

If you’ve not given the Archive a chance as a place to check out books, you should head on over to the OpenLibrary or the main Internet Archive site, where there are millions of books waiting for you, your friends, your family, your school.. and where it’s not just a scan of Braille, but some truly stunning works, like:

It’s all right there, waiting for you, an endless and amazing supply of information, research, entertainment and learning brought in by this spectacular group. May I suggest a browse?

And remember, if anyone catches you reading that issue of Playboy we’ve been discussing and whose journey we got to witness… just claim you were truly, honestly reading it for the articles.

14 thoughts on “Scanning a Braille Playboy”