We are proud to announce the launch of Understanding 9/11: A Television News Archive, a library of news coverage of the events of 9/11/2001 and their aftermath as presented by U.S. and international broadcasters. A resource for scholars, journalists and the public, the library presents one week (3,000 hours from 20 channels over 7 days) of news broadcasts for study, research and analysis, with select analysis by scholars. 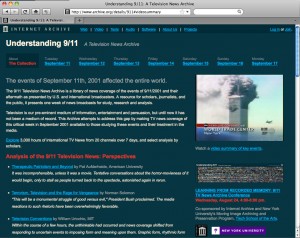 Television is our preeminent medium of information, entertainment and persuasion, but until now it has not been a medium of record. Scholars face great challenges in identifying, locating and adequately citing television news broadcasts in their research. This archive attempts to address this gap by making TV news coverage of this critical week in September 2001 available to those studying these events and their treatment in the media.

Background on the Television Archive

Internet Archive is a non-profit library founded in 1996 that started by attempting to collect every webpage from all websites. This is a major task but it is doable even by a non-profit.

Another medium, television, struck us as historically under-appreciated, despite its tremendous importance. Television is pervasive and persuasive, but it is difficult to access programs for research and analysis.  We felt that TV should be a medium of record, a moniker generally reserved for newspaper publishing. As we learned in high school, to effectively understand we need to be able to ‘compare and contrast’. We need to be able to quote.

Talking with the Library of Congress in 2000 we found that they were not systematically recording TV. Talking with the Federal Broadcast Information Service which was collecting TV for the US intelligence community, we found it would probably be difficult to get the recordings from them for library use. The notable Vanderbilt TV News archive at that time was struggling financially and only captured several hours of television news each night. As a result, we decided to create the Television Archive to help preserve this culturally important medium.

When the events of September 11, 2001 occurred, we, like most Americans, urgently wanted international perspectives on the United States. Stunned by the attacks, we tried to figure out what we could do to help.  Seventy-one people and organizations worked together to get one week of TV News up on the Internet to be launched on October 11, 2001. (Bear in mind this is 3 years before YouTube started.) Launched at the Newseum in Washington DC, we made a website that allowed anyone to research the collection of 20 channels for the week of September 11th.

Today, we are relaunching this collection with an updated interface with a conference at NYU.