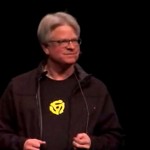 Rick Prelinger will be presenting his latest version of Lost Landscapes of San Francisco at the Internet Archive.

Lost Landscapes of San Francisco 6 (2011) is the latest in a series of historical urban explorations, made from home movies, industrial and promotional films and outtakes, and other cinematic ephemera. It sold out the Castro Theatre in December, and this will be its second screening. YOU are the soundtrack. Please come prepared to shout out your identifications, ask questions about what’s on the screen, and share your thoughts with fellow audience members.

Most of the footage in this program has not been shown before. It includes footage of San Francisco’s cemeteries just before their removal, unique drive-thru footage of the Old Produce Market (now Golden Gateway) in the late 1940s, cruising the newly-built Embarcadero Freeway, grungy back streets in North Beach, the sandswept Sunset District in the 1930s, and newly-rediscovered Cinemascope footage of Playland, the Sky Tram and San Francisco scenes, all in Kodachrome.

Suggested admission for the screening: $5 bucks — or 5 books, which will be donated to Internet Archive’s book scanning project. Reservations are required, the event frequently sells out.