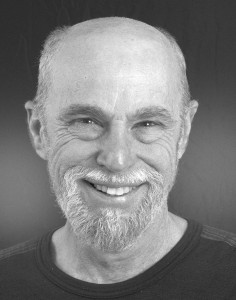 A couple months ago, I volunteered to be a tester of the redesign of the Internet Archive’s new interface. So, to prep, I decided to visit, online, during my lunch hours, to familiarize myself a little better beforehand with the Archive’s riches. Here’s an initial report of a few of my favorite findings –- of possible interest.

As my mouse hovered over the home page, poised over petabytes of universal wealth – an image came to mind from the last scene of Citizen Kane. A few journalists have gathered at the great hall of Charles Foster Kane’s castle, dwarfed against an unreal, gargantuan assemblage of “…objects great and small…piled pell-mell all over the place. Furniture, statues, paintings, bric-a-brac, things of obviously enormous value… standing beside a kitchen stove, an old rocking chair….a Burmese Temple and three Spanish ceilings down the hall….all in crates….” A nameless newspaperman wonders aloud what if— what if all the paintings and palaces and toys were all put together: what would it spell? (Imagine asking that about a petabyte of this archive!) 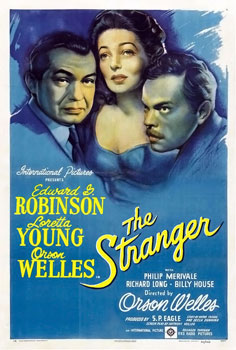 So, as a point of departure, I started with Orson Welles. Just a click of the mouse, and Presto! I found what I feel is one of his best, and one of his few cohesive movies, The Stranger (1946) — and in a quite decent print, thanks to its depositor. Its tags (those indispensable, subtextual, navigational landmarks) include WWII, thriller, mystery, drama and film noir.

Noir deserves a separate blog. (“Film noir” literally might mean a black screen, blank, without image.) For now, my definition (25-words-or-less): film noir registered an undercurrent of dissatisfaction within a triumphal, post-War American society. In it, good and evil, shadow and light, are polarized, and even switch roles.

And noir presents a curatorial challenge, as it’s usually mistaken as a genre (like thriller, mystery, comedy, Western, etc.), when really it’s a style (like baroque, hard-boiled, minimalist, postmodernist, etc.) It’s not always offbeat, rock ’em-sock ’em, but can also apply to documentary, comedy, romance, period drama, and so on. Prime noir features “mood cinematography” — pictures that can tell thousands of words. And traditional noir owes a great pictorial debt to German Expressionism. But, enough.

Anyhoo — noir style is most apt here, as The Stranger is about the infiltration of ex-Nazis into American society. What violence occurs on screen is Shakespearean, rather than gratuitous, yet the theme itself is quite unnerving. And there’s a haunting use of the subtext of clocks. That kept ticking in my mind as I continued on through the Archive. 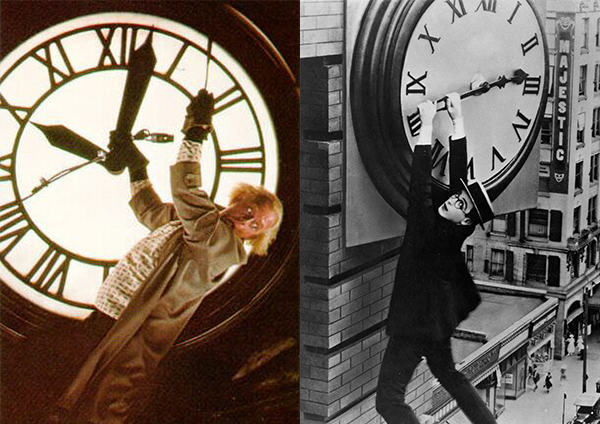 Next, I looked up the ace film montage specialist, “Slavko Vorkapich,” just out of curiosity — and, Shazam! a discovery! I’m already familiar with his 1941 pictorial fantasy, starring… the sea!  But I’d never seen his solo short, Conquer by the Clock (1943). And, fortuitously, it forms a curious sidebar to The Stranger. Just as a film montage juxtaposes images, it’s interesting to juxtapose films, as well.

Conquer by the Clock is propaganda – it’s preachy – and it’s a peachy piece of work. From the perfectly constructed opening montage of men picking up tools (like clockwork,) to its two morality tales, on to the rousing finale, it’s all of a piece and runs like a Swiss watch. They sure don’t make them like that anymore. Notice, for instance, how the squarish ratio of the screen permits a montage of ideas, which got left behind when the studios widened the screen, trying to compete with TV.

Orson Welles quite likely saw Clock (1943), before making The Stranger (1946). No question in my mind. For me, frankly, the question is, “Did Orson Welles ever understand cinematic montage?” He was a theater person who took to radio like a duck to water – but in his cinematic work (with exceptions like The Stranger, and Kane) his operative strategy of cinematic montage seemed more like a carnival of attractions, an amusement park rather than a dynamic whole like Vorkapich’s. 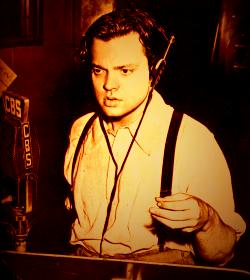 I’ve never seen his theater, but Orson Welles’ genius truly blossomed beautifully in the realm of radio theater. This is one of my lifelong, hands-down, favorite media. I grew up with radio alongside TV and movies. I preferred radio. Why? Simple: the pictures were better! Radio catered to the unrivaled medium of them all: human imagination. I invite you to set aside some time in the coming year to stroll through the golden era of radio drama at the Internet Archive. Listen with some friends, the way families used to gather together around a radio.

Radio broadcasted the gamut: comedies and westerns, melodramas and gangster tales. For a time, Orson Welles was a cut above, establishing and maintaining a repertory company of gifted dramatic artists presenting vivid radio adaptations of literature. It was called the Mercury Theater of the Air. The company was best known for its 1938 adaptation of HG Wells’ The War of the Worlds, (aka “the panic broadcast”) — arguably the Media Event of the 20th Century

Lesser known, but highly worth the time, are their dozens of other adaptations. Try a few, to acquire a taste. From the wild storytelling of The Count of Monte Cristo – to the simple spell of Our Town, recorded a few years after its stage debut. I’ve yet to hear them all, while others I keep coming back to. I’ve never been anything but totally engrossed and amazed by their pleasures. 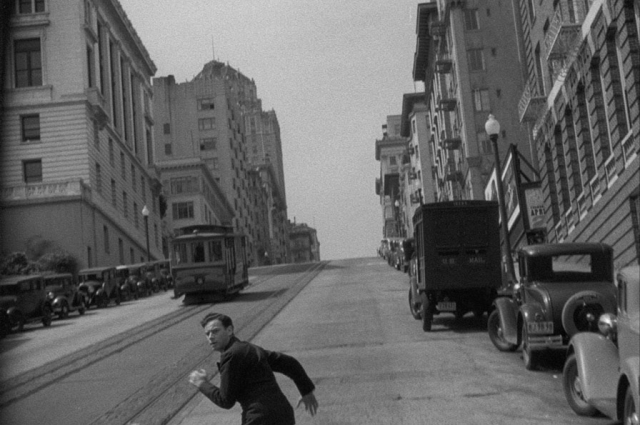 Next, a further lateral move. Having branched out from individual works to a collection, here’s another collection, from which Clock was taken. Of the many collections in the Internet Archive one of my hands-down favorites has been the Prelinger Archives. For background, it might worth digressing to touch upon the idea of a “film archive” in general.

In the early 20th-century, Henri Langlois had a passion for collecting film. Back then, people thought motion pictures an ephemeral amusement, a mere bagatelle. Eventually, as people came to appreciate cinema more discerningly, they discovered he had the only copies of forgotten masterpieces as well as missing reels of important movies. .:.

In Paris, in 1938, Henri Langlois co-founded an archive for the preservation and presentation of cinema, the Cinémathèque Française. In 1968, Richard Prelinger launched an archive for films still considered ephemeral – training films, propaganda, home movies, and so on. I’ve been a fan of his work since its inception, and was thrilled when the Library of Congress acquired his collection — and the Internet Archive began making major portions available via the Net.

If you haven’t yet visited the Prelinger Archives, pack a lunch before you visit, ‘cos there’s an overflowing cornucopia of treasures and treats in store. For an initial program guide, I recommend the profile in Mental Floss (2007). 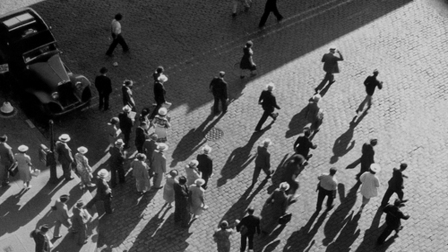 Where to go next? To round out my initial tour, I wanted to end on an up note. I’ve been impressed by how Brewster Kahle, Archivista Numero Uno, has definitely been doing the right thing in trying to figure out how to include housing into the equation for his employees. As much of the world now knows, San Francisco is now aiming to welcome 150,000 new citizens, in a city limited to seven by seven miles. How come? This physical and cultural transfiguration is being fueled by the new Gold Rush: software companies large and small, plus a bevy of Silicon Valley moguls. Rents have spiked such that, last week, a venerable 93-year-old tamale parlor had to close ‘cos its employees cannot afford to live here anymore. Interesting times.

All of that — plus my search for an antidote to our opening noir despair — motivated my looking up a film I hadn’t seen since I was a sophomore at UCLA, The City (1939) and – perfect! There it is. Right at my fingertips. Plus, there’s a handy narrative summary and partial shot list. Alongside all that, one can also cross-reference, starting with entries in Wikipedia and the Internet Movie Database (IMDB). Directed by Ralph Steiner and Willard Van Dyke, this visionary documentary features music by Aaron Copland and commentary by philosopher/critic, Lewis Mumford.

Seen today, the film is itself an archive of Americana – and a still vital call for shaping a humane, resilient urban future. Flawed in spots, it yet serves as a much-needed tonic, while such American cities as Allentown, Asheville, Cincinnati, Detroit, Louisville, and others, here and around the planet, deeply consider revitalization, sustainability, and community in these transitional times. “Think global, act local.” GG says, “Check out The City!”

May you and all beings enjoy the wisdom of infinite light and the compassion of endless life in this New Year. Amen!

.:. Hollywood has always downplayed its cultural and artistic importance. (“Aw, shucks, we’re just an amusement business that’s gotten real popular.”) Had it acknowledged the fact that film might just well be the great art form of the 20th century – marrying pictorial representation, musical form, drama, science, and technology – then all the movie studios would be beholden to preserving miles and miles of celluloid. Bottom line: no way.

Gary Gach writes haiku and swims in the San Francisco Bay. He is also author of the Complete Idiot’s Guide to Buddhism (Nautilus Book Award) and editor of What Book!? Buddha Poems from Beat to Hiphop (American Book Award). He hosts the Mindfulness Fellowship weekly in San Francisco. And a shout-out to the Internet Archive: when an anonymous hacker took down his home page (1997-2008), the WayBack Machine came to the rescue.

5 thoughts on “QUINTET: Guest Curating the Archive by Gary Gach”