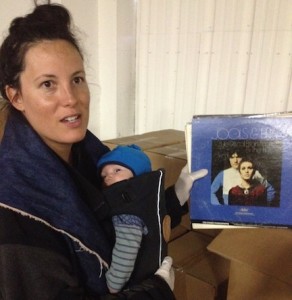 At two-and-a-half months, Zinnia Dupler takes the cake as the youngest volunteer to give us a hand here at the Internet Archive. Strapped to her mom, Lindsey, the duo is hard at work out here in our Richmond warehouse, as we sort about 100,000 LPs.  Ten minutes after taking this photo, I encountered a little musical gem on the other side of the warehouse – but we hid it from her crying eyes.

It was in a pile of records being boxed by slightly older interns working on the 48,000 seventy-eights we got from the Batavia Public Library in Illinois, part of the Barrie H.Thorp Collection.

Now this is the first time we’ve had a chance to have a look at this great collection, and so far, it’s quite a surprise. At least the first pallet has 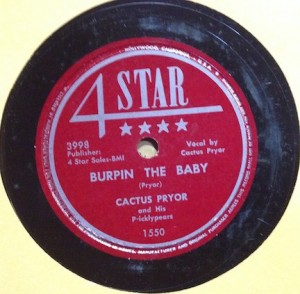 been box-after-box of hillbilly, country, and western swing records. Now I used to think I knew a bit about music. But after this, it’s back to school for me. Just so many artists I’ve never heard of or held a record by. You know, like the Burpin’ Baby warbler, Cactus Pryor and his Pricklypears!

In the ‘G’s alone there’s Curly Gribbs, Lonnie Glosson and the Georgians. Geeez! Did you know that Hank Snow had a recordin’ kid, Jimmy, and he cut “Rocky Mountain Boogie’ on 4 Star Records, or that Cass Daley, star of stage and screen, was the “Queen of Musical Mayhem?” Me neither.  The Davis Sisters, turns out, included a young Skeeter!  There was also a Black Gospel group named the Davis Sisters, also from the 40s, and we got some of those seventy-eights also.  Then there’s them Koen Kobblers, Bill Mooney and his Cactus Twisters, and Ozie Waters and the Colorado Hillbillies. No matter that they should be named the Colorado Mountaineers–they’re new to me. 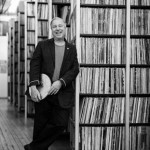 B. George is the Music Curator for the Internet Archive. He is also the co-founder and Director of the ARChive of Contemporary Music in NYC.  ARC is a partner of the Internet Archive, where B. George and his staff help to curate the physical and digital music collections.

2 thoughts on “Internet Archive’s Youngest Volunteer– by b. George”