The TPP is a contentious trade agreement that is getting quite a bit of negative press in the 2016 U.S. election cycle. Among many other issues, the TPP would govern how signatory countries protect and enforce intellectual property rights. The TPP could have a large negative impact on libraries by increasing copyright term limits and neglecting the essential limitations on copyright law that libraries around the world rely on. Many different groups have vocally opposed the TPP, both for its substance and for the secrecy of the negotiations process. 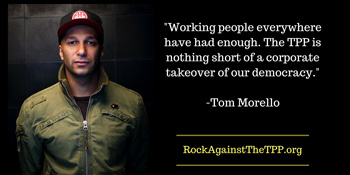 Organized by Fight for the Future and Rage Against the Machine guitarist Tom Morello, the  tour is designed to pull new audiences into the fight against the TPP. See more details and a full lineup at https://www.rockagainstthetpp.org/san-francisco-ca

The concert will be followed by a teach-in on “How to Fight the TPP” on Saturday, Sept. 10th from 1pm – 3pm at 1999 Bryant Street, hosted by experts from a wide range of organizations opposing the TPP.

2 thoughts on “Rock Against the TPP is Coming to San Francisco…TOMORROW!”