There are thirteen days until Election Day — not that we’re counting.

In this most bizarre, unruly, terrifying, fascinating election year, the Internet Archive has been in the thick of it. We’re using technology to give journalists, researchers and the public the power to take the political junk food that’s typically spoon fed to all of us—the political ads, the presidential debates, the TV news broadcasts—and help us to scrutinize the labels, dig into the content, and turn that meal into something more nutritious. 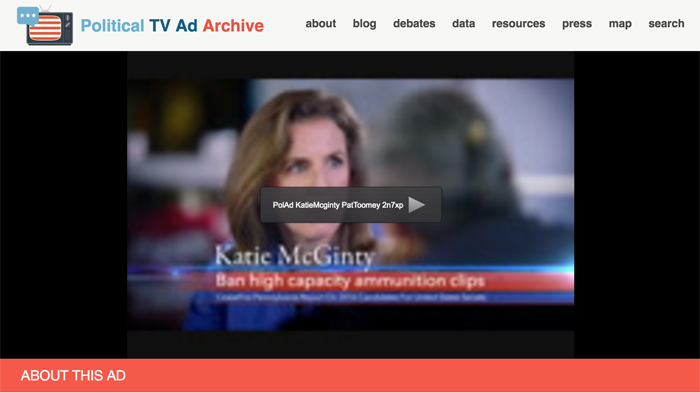 Political ads. We’ve archived more than 2,600 different ads over at the Political TV Ad Archive and used the open source Duplitron created by senior technologist Dan Schultz to count nearly 300,000 airings of the TV ads across 26 media markets. We’ve linked the ads to OpenSecrets.org information on the sponsors—whether it’s a super PAC, a candidate committee, or a nonprofit “dark money” group.

Journalists have used the underlying metadata to visualize this information creatively, whether it’s the moment when anti-Trump ads started popping up in Florida (FiveThirtyEight.com), revealing how Ted Cruz favors “The Sound of Music”  (Time.com), or turning the experience of being an Iowa voter deluged with campaign ads into an 8-bit arcade-style video game (The Atlantic).

Meanwhile, our fact checking partners at FactCheck.org, PolitiFact, and The Washington Post’s Fact Checker, have fact checked 116 archived ads and counting, not just for the presidential candidates but for U.S. Senate, House, and local campaigns as well. Of the 70 ads fact check by PolitiFact reporters, nearly half have earned ratings ranging from “Mostly false” to “Pants on Fire!”

Example: this “Pants on Fire!” ad played nearly 300 times in Cleveland, Ohio, in August, where Democrat Ted Strickland is facing incumbent Senate Rob Portman, a Republican, in a competitive race.  The claim: that as governor, Democrat Ted Strickland proposed deep budget cuts and then “wasted over $250,000 remodeling his bathrooms at the governor’s mansion.” While it’s true Strickland proposed budget cuts in the wake of the 2008 financial crisis, the money used to renovate the governor’s mansion didn’t come from that pool of money. What’s more, the bathrooms in question were not for the governor’s personal use, but rather for tourists who come to visit the mansion.

Presidential debates. In the recent presidential debates, the Internet Archive opened up the TV News Archive to offer near real-time broadcasts while the candidates were still on the stage. Journalists and fact checkers used this online resource to share clips of key points in the debate.

Example: during the third presidential debate, Farai Chideya, a reporter for FiveThirtyEight.com, linked to this clip in a live blog about the debate, noting that abortion is a key issue for Trump’s core supporters.

Twenty-five hours after the debate, we learned that the public made 85 quotes from our TV News Archive debate footage, and that viewers played these more than one million times—a healthy response to this brand new experiment.

TV News. When the debates were over, we used the Duplitron on TV news to tally which debate clips were shared on such networks as CNN, FOX News, and MSNBC and shows such as “Good Morning America” and the “Today show.” Journalists used our downloadable data to create visualizations to show how TV News shows present the debates to viewers. 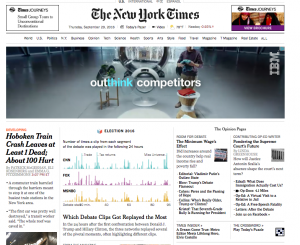 Example: this interactive visualization in The New York Times shows readers how the different cable news networks presented the first debates, and highlights the differences between them.

The Wall Street Journal, the Economist, Fusion and The Atlantic all have used the data to visualize how the debates were portrayed for viewers. In addition, we’re keeping our eyes open and Duplitron turned on for tracking how TV news shows cover other key video. For example, we have data on how TV news shows used clips from the 2005 “Access Hollywood” tape, in which Trump bragged about groping women, and his subsequent apology.

In the thirteen days remaining before the election, we’ll continue to track airings of political ads in key battleground state markets, work with fact checking and journalist partners, and stay on the TV news beat with attention to breaking news.

And when it’s all over, we’re looking forward to working with our partners to figure out what just happened, what we’ve learned, and how we can help in the future.