A lot of things have changed in the last 20 years. A lot of things haven’t. We’ve moved from the tyranny of physical media to the seemingly unlimited possibilities of total digital immersion. We’ve moved from a top down, mega corporate dominated media, to a hyper-fragmented multiverse where any kind of information is accessible within reason (and sometimes without!). The fundamental issue that “memory” and how it responds to the digital etherealization of all aspects of the information economy we inhabit conditions everything we do in this 21st-century culture of post-, post-, post-everything contemporary America. Whether it’s the legions of people who walk the streets with Bluetooth enabled earbuds that allow them to ignore the physical reality of the world around them, or the Pokémon Go hordes playing the world’s largest video game as it’s overlaid on stuff that happens “IRL” (In Real Life) that layer digital role playing over the world: diagnosis is pending. But the fundamental fact is clear: digital archives are more important than ever and how we engage and access the archival material of the past, shapes and molds the way we experience the present and future. Playing with the Archive is a kind of digital analytics of the subconscious impulse to collage. It’s also really fun.

Mnemosyne was the Greek muse who personified memory. She was a Titaness who was the daughter of Uranus (who represented “Sky”), the son and husband of Gaia, Mother Earth. When you break it down, Mnemosyne had a deeply complicated life, and ended up birthing the other muses with her nephew, Zeus. Ancient Greek myth was quite an incestuous place, and every deity had complicated and deeply interwoven histories that added layers and layers of what we would now call “intertextuality.” Look at it this way: a Titaness, Mnemosyne, gave birth to Urania (Muse of Astronomy), Polyhymnia (Muse of hymns,) Melpomene (Muse of tragedy,) Erato (Muse of lyric poetry,) Clio (Muse of history,) Calliope (Muse of epic poetry,) Terpsichore (Muse of dance,) and Euterpe (Muse of music). It’s complicated. Mnemosyne also presided over her own pool in Hades as a counterpoint to the river Lethe, where the dead went to drink to forget their previous life. If you wanted to remember things, you went to Mnemosyne’s pool instead. You had to be clever enough to find it. Otherwise, you’d end up crossing the river under the control of spirits guided by the “helmsman” whose title translates from the Greek term “kybernētēs” across the mythical river into the land of the dead aka Hades. What’s amazing about the wildly “recombinant” logic of this cast of characters is that somehow it became the foundation of our modern methods for naming almost every aspect of digital media — including the term “media.” Media, like the term data is a plural form of a word “appropriated” directly from Latin. But the eerie resonance it has with our era comes into play when we think of the ways “the archive” acts as a downright uncanny reflection site of language and its collision between code and culture.

Until the internet, the term cyber was usually used to measure words about governance and then later evolved to how we look at computers, computer networks, and now things like augmented reality and virtual reality. The term traces back to the word cybernetics, which was popularized by the renowned mathematician Norbert Wiener, founder of Information theory, at MIT. There’s a strange emergent logic that connects the dots here: permutation, wordplay, and above all, the use of borrowed motifs and ahistorical connections between utterly unassociated material. I guess William S. Burroughs was right: the world has become a mega-Cybertron, a place where everything is mixed, cut and paste style, to make new meanings from old. With people like Norbert Wiener, cybernetics usually refers to the study of mechanical and electronic systems designed at heart, to replace human systems. The term “cyberspace” was coined by William Gibson, to reflect the etherealized world of his 1982 classic, Burning Chrome. He used it again as a reference point for Neuromancer, his groundbreaking novel. A great, oft-cited passage gives you a sense how resonant it is with our current time:

Cyberspace. A consensual hallucination experienced daily by billions of legitimate operators, in every nation, by children being taught mathematical concepts… a graphic representation of data abstracted from the banks of every computer in the human system. Unthinkable complexity. Lines of light ranged in the nonspace of the mind, clusters and constellations of data. Like city lights, receding…

When the Internet Archive asked me to do a megamix of their archive of recordings from their data files, I was a bit overwhelmed. There’s no way any human being could comb through even the way they’ve documented just the web, let alone the material they have asked people to upload.Where to start? Sir Tim Berners-Lee’s speech inaugurating the internet back when he came up with the term the “Semantic Web?”  The first recordings from Edison? That could be cool. Maybe mix that with GW Bush’s State of the Union speech inaugurating the invasion of Iraq? Why not. Take Hedy Lamar’s original blueprints for spread spectrum “secret communications systems” and mix that with recordings of William S. Burrough and Malcolm X, with a beat made from open source 1920’s jazz and 1950’s New Orleans blues? Why not. Grab some clips of Cory Doctorow talking about the upcoming war on open computing and mix it with Parliament Funkadelic? Sure. Take the first “sound heard around the world,” the telemetry signals guiding the Sputnik satellite as it swirled around planet Earth to become our first orbital artificial moon? Cool. Why not? Take a speech from Margaret Sanger, the woman who started Planned Parenthood, and mix it with Public Enemy? Cool. Take D.W. Griffith’s “Birth of a Nation” and re-score it with the Quincy Jones theme from “Fat Albert?” That would actually be kind of cool, but would require a lot of editing.

The basic idea here is that once you have the recordings and documentation of all aspects of human activity from the last several centuries, that is a serious “mega-mix.”

What you will hear in the short track I made is a mini reflection of the density of the sheer volume of materials that the Internet Archive has onsite. It is a humble reminder that through the computer, the network, and the wireless transmission of information, we have an immaculate reflection of what Alan Turing may have called “morphogenesis” — the human, all too human, attempt to corral the world into anthropocentric metaphors that seek to convey the sublime, the edge of human understanding: the emergent patterns that occur when you recombine material with unexpectedly powerful new connections. 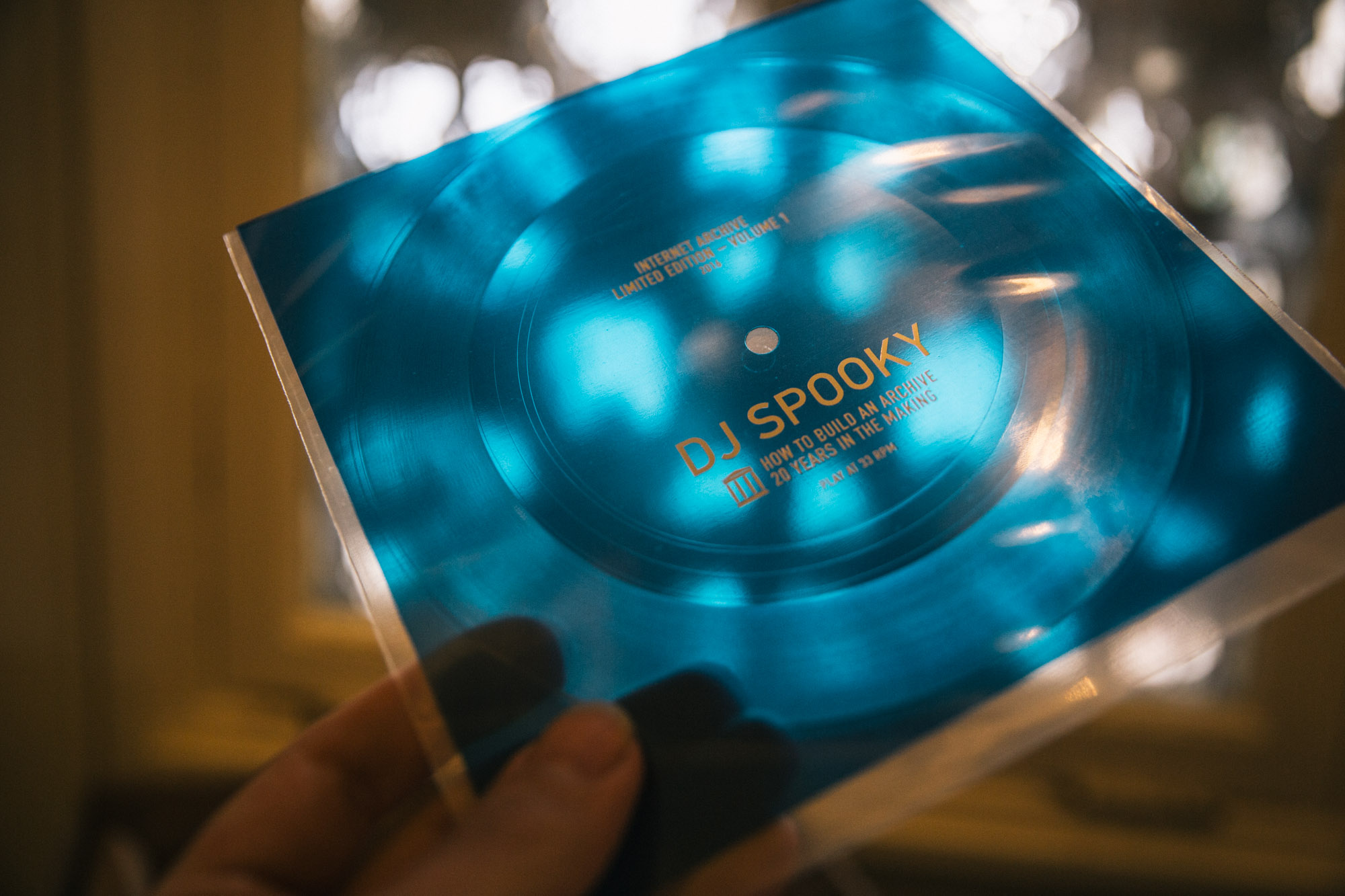 I’m honored to be the first DJ to start. But I’m also honored that many, many more will follow. The Archive is a mirror of infinite recombinant potential. I hope that its gift of free culture and free exchange creates a place where we will be comfortable with what is almost impossible to guess comes next. It is not a “collaborative filter” but a place where you are invited to explore on your own and come up with new ways of seeing the infinite memory palace of the fragments of history, time, and space that make this modern 21st century world work. 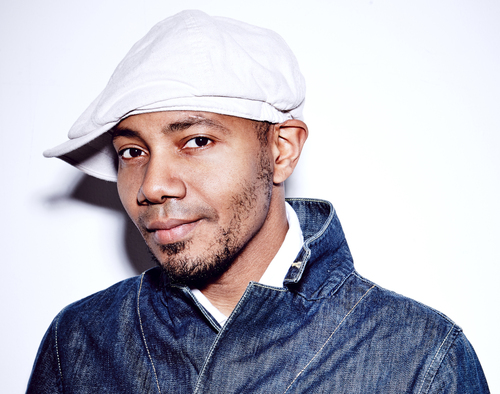 J Spooky’s work ranges from creating the first DJ app to producing an impactful DVD anthology about the “Pioneers of African American Cinema.” According to a New York Times review, “there has never been a more significant video release than ‘Pioneers of African-American Cinema.'” The prolific innovator and artist also created 13 music albums and is about to release a fourteenth. Called “Phantom Dancehall,” it is an intense mix of hip hop, Jamaican ska and dancehall culture.

1 thought on “The New Memory Palace”