It’s been a little over 4 years since the Internet Archive started providing emulation in the browser from our software collection; millions of plays of games, utilities, and everything else that shows up on a screen have happened since then. While we continue to refine the technology (including adding Webassembly as an option for running the emulations), we also have tried to expand out to various platforms, computers, and anything else that we can, based on the work of the emulation community, especially the MAME Development Team.

For a number of years, the MAME team has been moving towards emulating a class of hardware and software that, for some, stretches the bounds of what emulation can do, and we have now put up a collection of some of their efforts here at archive.org. 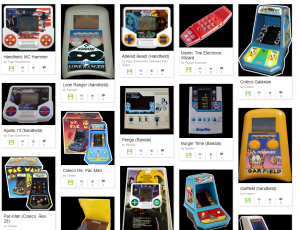 This collection of emulated handheld games, tabletop machines, and even board games stretch from the 1970s well into the 1990s. They are attempts to make portable, digital versions of the LCD, VFD and LED-based machines that sold, often cheaply, at toy stores and booths over the decades.

We have done our best to add instructions and in some cases link to scanned versions of the original manuals for these games. They range from notably simplistic efforts to truly complicated, many-buttoned affairs that are truly difficult to learn, much less master.

They are, of course, entertaining in themselves – these are attempts to put together inexpensive versions of video games of the time, or bringing new properties wholecloth into existence. Often sold cheaply enough that they were sealed in plastic and sold in the same stores as a screwdriver set or flashlight, these little systems tried to pack the most amount of “game” into a small, custom plastic case, running on batteries. (Some were, of course, better built than others.)

They also represent the difficulty ahead for many aspects of digital entertainment, and as such are worth experiencing and understanding for that reason alone.

The shocking difference between the original sold arcade stand-ups and their toy store equivalents can be seen, for example, in the Arcade Game Q*Bert, which you can play at the Archive. 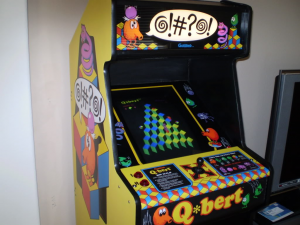 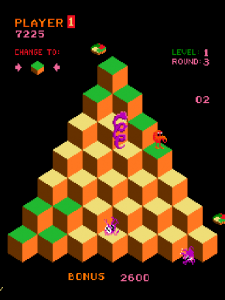 Meanwhile. some time after the release of the arcade machine, a plastic tabletop version of the game came out, and it looked like this: 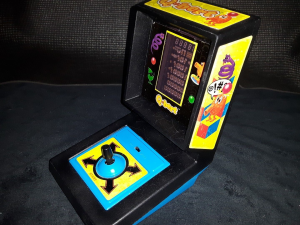 Using VFD (Vacuum Fluorescent Display) technology, the pre-formed art is lit up based on circuits that try to act like the arcade game as much as possible, without using an actual video screen or a even the same programming. As a result, the “video’ is much more abstract, fascinatingly so: 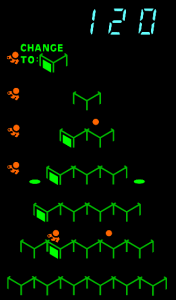 The music and speech synthesis is gone, a small plastic joystick replaces the metal and hard composite of the original, and the colors are a fraction of what they were. But somehow, if you squint, the original Q*Bert game is in there.

This sort of Herculean effort to squeeze a major arcade machine into a handful of circuits and a beeping, booping shell of what it once was is an ongoing situation – where once it was trying to make arcade machines work both on home consoles like the 2600 and Colecovision, so it was also the case of these plastic toy games. Work of this sort continues, as mobile games take charge and developers often work to bring huge immersive experiences to where a phone hits all the same notes.

The work in this area often speaks for itself. Check out some of these “screenshots” in the VFD games and see if you recognize the originals:

Naturally, these simple screens came packed in the brightest, most colorful stickers and plastic available, to lure in customers. The original containers, while not “emulated” in this browser-based version, definitely represent an important part of the experience.

A Major Bow to the Emulation Developers

The efforts behind accurately reflecting video game and computer experiences in an emulator, which the Archive then uses to provide our in-browser Emularity, are impressive in their own right, and should be highlighted as the lion’s group of the effort. Groups like the MAME Team as well as efforts like Dolphin, Higan, and many others, are all poking and prodding code to bring accuracy, speed and depth to software preservation. They are an often overlooked legion of volunteer effort addressing technical hurdles that no one else is approaching.

While this entry could be filled with many paragraphs about these efforts, one particularly strong example sticks out: Bringing emulation of LCD-based games to MAME.

Destroying The Artifact to Save It

In the case of most emulation, the chips of a circuit board as well as storage media connected to a machine can be read from non-destructively, such that the information is pulled off the original, returned to place, and these copies are used to present emulated versions. An example of this might be an arcade machine, whose chips are pulled from a circuit board, read, and then plugged back into the board, allowing the arcade machine to keep functioning. (Occasionally, an arcade machine/computer will use approaches like glue or batteries to prevent this sort of duplication, but it is generally a rare thing, due to maintenance concerns for operators.)

In the case of an LCD game machine, however, sometimes it is necessary to pull the item completely apart to get all the information from it. On the MAME team, there is a contributor named Sean Riddle and his collaborator “hap” who have been tireless in digging the information out of both LCD games and general computer chips.

To get the information off an LCD game, it has to be pulled apart and all its components scanned, vectorized, and traced to then make them into a software version of themselves. Among the information grabbed is the LCD display itself, which has a pre-formed set of images that do not overlap and represent every possible permutation of any visual data in the game. This will make almost no sense without illustrations, so here are some.

When playing the LCD version of the game “Nightmare Before Christmas”, the game will look like this: 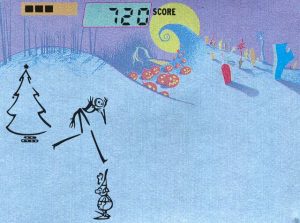 That is a drawn background (also scanned in this process) that has a clear liquid-crystal display over it, showing Jack Skellington, the tree, and an elf. The artistry and intense technical challenge as both the original programming/design and the recovery of this information becomes clear when you see the LCD layer with all the elements “on” at once: 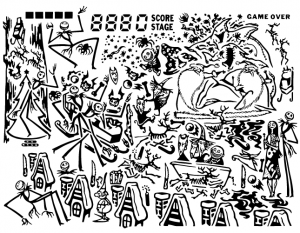 This sort of intense work is everywhere in the background of these LCD games. Here are some more: 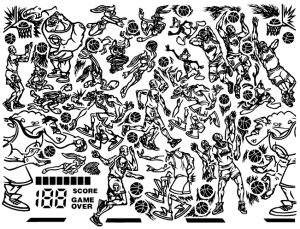 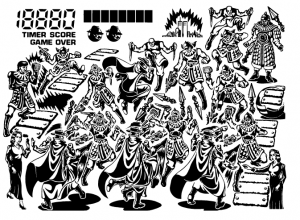 (There are many more examples of these at this page at Sean Riddle’s site.)

Not only must the LCD panel be disassembled, but the circuit board beneath as well, to determine the programming involved. These are scanned and then studied to work out the cross-connections that tell the game when to light up what. The work has been optimized and can often go relatively quickly, but only due to years of experience behind the effort, experience which, again, comes from a volunteer force. Unfortunately, the machine does not survive, but the argument is made, quite rightly, that otherwise these toys will fade into oblivion. Now, they can be played by thousands or millions and do so for a significant amount of time to come.

The Fundamental Question: What Needs to be Emulated?

Floating in the back of this new collection, and in the many new LCD and electronic games being emulated by the MAME Team, is the core concern of “what will bring the most of the old game to life to be able to experience and study it?” With “standard” arcade games, it is often just a case of providing the video output as well as the speaker output and accepting the control panel signals either through a keyboard or through connected hardware. While you do not get the full role-play of being inside a dark arcade in the 1980s, you do get both the chance to play the original program as well as study its inner workings and the discoveries made in the process. Additional efforts to photograph or reference control panels, outside artwork and so on are also being done to the best available amount.

This question falls into sharp focus, however, with these electronic toys. The plastic is such a major component of the experience that it may not be enough for some researchers and users to be handed a version of the visual output to really know what the game was like. Compare the output of Bandai Pair Match: 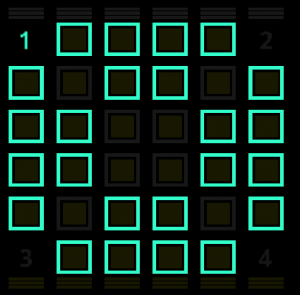 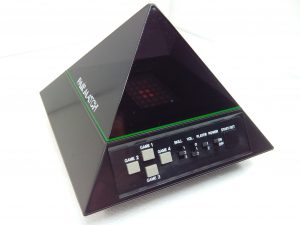 The “core” is there, but a lot is left to the side out of necessity. Documentation, research and capturing all aspects of these machines will be required if they are to be ever recreated or understood in the future.

It’s the best of times that we are able to ask these questions while originals are still around, and it’s a testament to the many great teams and researchers who are bringing these old games into the realms of archives.

So please, take a walk through the Handheld History collection (as well as our other emulation efforts) and relive those plastic days of joy again.

Shout Outs and Thanks

Many different efforts and projects were brought together to make the Handheld History collection what it is. (We intend to expand it over time.) As always, a huge thanks to the MAME Developers for their tireless efforts to emulate our digital history; a special shout-out to Ryan Holtz for his announcements and highlighting of advances in this effort that inspired this collection to be assembled. Thanks to Daniel Brooks for maintenance of The Emularity as well as expanding the capabilities of the system to handle these new emulations. Sources for the photographs of the original plastic systems include The Handheld Games Museum and Electronic Plastic. (It is amazing how few photos of the original toy systems exist; in some cases Ebay sales are the only documented photographs of any resolution.) As a reference work for knowing which systems are emulated and how, we relied heavily on the work of the Arcade Italia Database site. Thanks to Azma and Zeether for providing metadata on images and control schemes for these games; and a huge thanks to all the photographers, documenters, scanners and reviewers who have been chronicling the history of these games for decades.

18 thoughts on “Some Very Entertaining Plastic, Emulated at the Archive”