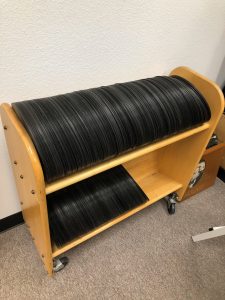 Minot State’s History 78s Project wanted to get its collection of approximately 15,000 78s out to a wider audience and is using Internet Archive to get the biggest bang.

One problem. The school community didn’t have any access to those discs. Playing 78-rpm records in the day of iPods, Pandora and Spotify is no easy feat.

The collection of 78-rpm discs covering classical to early jazz, blues and country music was historically significant. But without digital access, the music wasn’t being taken in by the student body, faculty, alumni or the wider world. And so Minot State is donating approximately 15,000 recordings to the Internet Archive so they can be digitized and preserved.

“We’re tremendously excited that the Internet Archive will be able to preserve this rare slice of America’s early recording history,” said Minot State history professor Daniel Ringrose. “Personally, I’ve always thought history needs a soundtrack, and this digitation project will let many people experience that past by listening to it.”

The Internet Archive is in the midst of digitizing the entire lot, and Minot State’s MSU History 78s Project will have as its reward the complete collection digitized.

“We are preserving the state’s property,” Ringrose said. “This is a chance to partner with Internet Archive make accessible America’s sound history. There’s jazz in there, patriotic music, dance music, waltzes, western Americana and even some early rock and roll 78s. The earliest discs go back before World War I, to 1912 and 2013. There are a lot of regional labels and regional artists that would be hard to find.” 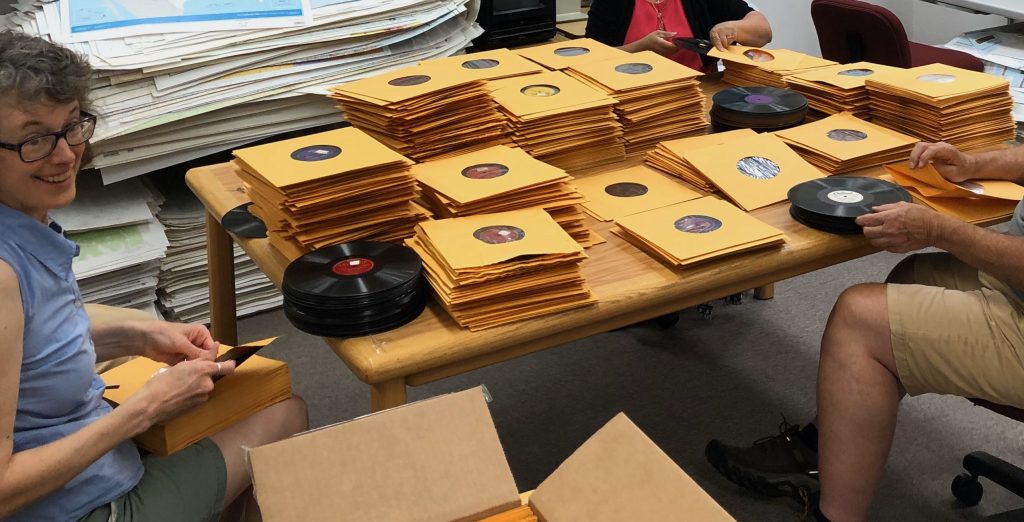 It took Minot State’s History 78s Project three weeks of work from volunteers to get the collection ready to ship to Internet Archive.

Thanks to a group of 19 volunteers that spent three weeks of summer mornings sorting the individual discs into sleeves and boxing them up for shipping the discs have been delivered to the Internet Archive.

“Many of the recordings never made it off the 78s they were originally on,” said Brewster Kahle, founder of the Internet Archive. “So, having the collection at the Internet Archive gives a breadth and depth to music people have not heard for decades.

“We are hoping there are many records from the middle of the country from the early 20th century representing the different immigrant communities and emerging blues, jazz and country genres.”

The Internet Archive, which currently has about 150,000 recordings digitized and available, has the capacity to digitize about 4,000 discs per month, making it likely that the entire Minot State collection will be available to the public by sometime in 2020.

“It’s exciting to have some organization make it possible to have people study this and to make it more accessible,” Ringrose said. “Some of this stuff is still in original sleeves and may never have been played. Other stuff was so old and so fragile, and we didn’t have any equipment to play it on. This can be a learning tool.

“We recruited volunteers aged from 12 to 72 to box this stuff up for shipping. And the 12-year-old is asking how much music is on one of these discs. There is no point of reference for a disc that may only have three minutes of music on it. The whole collection might fit on that iPod that Steve Jobs held up 10 years ago, and we needed a whole semitruck to ship it.” 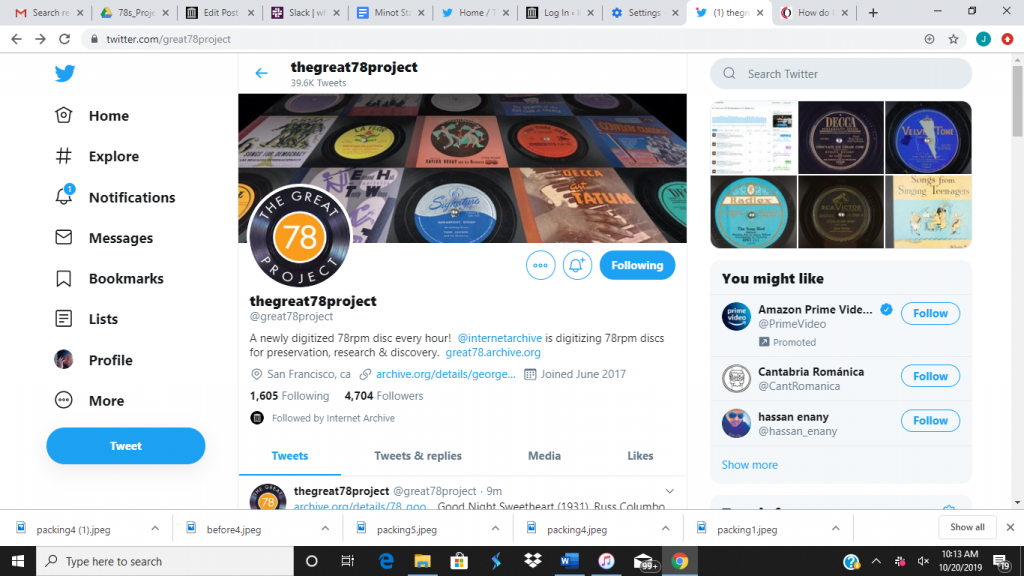 As the newly acquired discs from the MSU History 78s Project get digitized, they will become part of the The Great 78 Project at Internet Archive.

And there is no shortage of those waiting for the new additions. There are almost 5,000 followers of the Internet Archive’s twitter robot feed highlighting a newly digitized record every hour (https://twitter.com/great78project).

The Minot State donation may be at the leading edge of a new wave of library activity. The North Dakota school wanted to find a way to get the collection out to a wider audience and target the space that the recordings were taking up to other purposes. The first thought was to offer all that music to another school, UC Santa Barbara, with a large collection of 78s. UCSB couldn’t make it happen, but David Seubert from the school introduced Ringrose to Kahle and Internet Archive.

“We are thankful that with our current funding, we can pack, ship, process and preserve the whole collection, both physically and digitally,” Kahle said. Minot State will get back a digital copy of their entire collection which Ringrose said he believes will prove to be more accessed and useful than the 78 collection had been in recent decades.

Kahle said that the addition of the Minot State collection together with a similar one from the Boston Public Library are the first steps in opening the world of early recorded music to the digital age. They are among the first to decide to reformat their collections as opposed to other options such as disposing of them.

“We would like these recordings to be linked to from Wikipedia and discographies, and also from reference sites such as discogs.com and musicbrainz.org. We even have an interface to the collection through Amazon’s Alexa. If you say `Alexa, ask Internet Archive to play tango 78s,’ it will play for hours. Similarly, with Google Home, if you say `Hey Google, ask Internet Archive to play hillbilly 78s.’

“Whatever it takes to get this music into the hands and ears of digital listeners.”