Festivities are planned on January 19 to recognize Public Domain Day and embrace the possibilities of new works freely available from 1927.

In the United States, the recent declaration of the federal year of Open Science and the White House memo unlocking publicly funded research outputs has buoyed the open community and its outlook on knowledge sharing.

However, the celebration will be muted in Canada where librarians and educators are assessing the impact of a vast expansion of the copyright term.

Canada’s copyright protection for artistic works was extended as 2022 came to a close from life of the author plus 50 years—to life of the author plus 70 years. The change was the result of international trade negotiations in the United States-Mexico-Canada Agreement (USMCA), requiring Canada to bring its terms closer to that of the U.S.

Once items are in the public domain, they can be republished or repurposed without seeking permission or paying a rights holder. This allows libraries, museums, and archives to use materials freely for research and historical purposes, as well as post online archives of the important documents and creative works.

The change in Canada means books, movies, plays, and songs that were previously scheduled to be free from copyright  will not be in the public domain until 2043.

“It’s a disappointment and a feeling of mourning,” said Andrea Mills, executive director of Internet Archive Canada, of the policy change that prompted the cancellation of Public Domain Day parties in the country. “It feels more like we should have a wake.”

(Others share similar concerns about the negative impact of the policy change. See Reconsidering the Copyright Bargain: by Adian Sheppard, director of the University of Alberta’s copyright office; A bizarre 20-year hiatus: Changes to copyright term in Canada by Jennifer Zerkee, Simon Fraser University library copyright specialist; and an article Interminable pause: Government must address harm caused by extension of copyright term by Mark Swartz, a scholarly publishing librarian an Queen’s University.)

Canadians used to feel good about the annual Public Domain Day, with its shorter copyright term than the U.S., said Michael Geist, Canada Research Chair in internet and e-commerce law at the University of Ottawa. Now, the country is beginning to consider the ramifications of the new terms, including disruptions to digitization projects and the increased cost of materials that will remain under copyright for educational institutions.

“Not having an enriched public domain for 20 years creates some real harms,” said Geist, who is also a member of the Internet Archive Canada board. “The vast majority of works that have no commercial value at the end of their life will be locked down for an additional 20 years.”

The change will limit access to little-known Canadian authors whose works are often out of print, Mills said. (See her blog post: A Missed Opportunity to Revive Obscure Canadian Literature – Internet Archive Canada)

The policy change was buried in a budget bill and there was no public announcement, leaving many Canadians unaware, Geist said.

The extended protection was agreed to as part of closed trade negotiations, said Peter Routhier, a copyright attorney who is on the Internet Archive’s policy team. That kind of negotiation does not follow the same sort of open process as a democratic legislature. In these kinds of settings, commercial interests are often prioritized, and there are very few ways for the public to engage, he said.

Mills said these recent changes by the government have an “overall chilling effect” on copyright policy.

Before the copyright terms were extended, the Canadian government did hold hearings to consider registration solutions and exceptions to works entering the public domain. In the end, those proposals were not adopted.

When looking at thousands of works, there is value in the overall collective rights for the authors, Geist said. But, he noted, there are also education costs to acquire works and loss of creativity to revise works in new ways when materials remain under copyright.

“It’s hard to be optimistic,” Geist said. “But it’s in the realm of possibility the government could consider some [copyright exceptions], particularly for groups like librarians, archives, and museums. “The government has not shown a lot of interest in this issue. If anything, it has sort of done its best to try to keep it below the radar screen. We’ll have to wait and see.”

To advance the public interest, librarians in Canada, the U.S., and elsewhere are pushing for reforms to licensing agreements to e-books. With the pause for new works entering the Canadian public domain, advocacy to make knowledge open by default is even more important.

The events in Canada are a reminder that what is—and isn’t—in the public domain is ultimately a policy decision and vigilance is needed to ensure the public interest is elevated in policy conversations about copyright.

Tune in to learn more about Public Domain Day at an event hosted by the Internet Archive in collaboration with partner organizations on January 19 at 4 p.m. ET. Register here. This year’s event will celebrate the theme, “The Best Things in Life Are Free,” and feature a host of entertainers, historians, librarians, academics, activists, and others.

To mark his 100th day in office, President Donald Trump made several public appearances and released a campaign-style political ad. Here are some fact-checked claims from those televised interviews,  speeches, as well as the ad, all viewable and shareable on the TV News Archive. 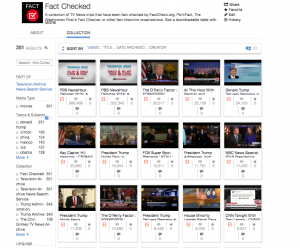 President Donald Trump put his stamp of approval on this ad, which includes several factual claims. Among them: “Fact: 500,000-plus jobs created,” and “America becoming more energy independent,” while the words “Keystone Pipeline” are shown on screen.

“Using just the two months on his watch–February and March–the U.S. economy created 317,000 jobs, not 500,000,” reported Louis Jacobson for PolitiFact.

“Samantha Gross, a fellow at the Brookings Institution’s Energy Security and Climate Initiative… notes that she doesn’t think approving the pipeline was a bad decision…  ‘We’ve made it easier and efficient to ship that crude down to the states,’ though [sic.] the pipeline, ‘but as far as changing energy independence, I don’t think so,’ she said,” Lori Robertson reported for FactCheck.org.

At the National Rifle Association’s annual meeting in Georgia on April 28, Trump said, “For the first time in the modern political era, we have confirmed a new justice in the first 100 days. The last time that happened was 136 years ago, in 1881. Now, we won’t get any credit for this, but don’t worry about it.”

This statement was rated “mostly true” by PolitiFact’s Lauren Carroll. “Trump has his history right. He is indeed the first modern president to fill an open Supreme Court seat within the first 100 days.” She went on to report “The reality is that very few presidents are presented with the opportunity to appoint and confirm a new Supreme Court justice within their first 100 days… Trump is the only one of the group who entered office with a vacant Supreme Court seat from the start—meaning he had a full 100 days to nominate and confirm his pick.”

The president spoke to a large crowd in Harrisburg, Pennsylvania, where he cited a study by the conservative Media Research Center talking about negative coverage of his administration. He then suggested the reason was “perhaps that’s because, according to the Center for Public Integrity, 96 percent of journalists who made donations in the last election gave them to our opponent.”

FactCheck.org reported that the Center for Public Integrity study showed “that about 430 people ‘who work in journalism’ contributed about $382,000 to the Clinton campaign through August, compared with about 50 journalists who contributed $14,000 to Trump. Notably, however, the study did not find that any journalists responsible for covering the White House, Congress or national politics made political contributions of any kind.”

An amendment was proposed since then, and Glenn Kessler summarized the new proposal for the Washington Post’s Fact Checker, writing, “if the bill ever became law, much would depend on unknown policy decisions by individual states–and then how those decisions are implemented.” This proposal had a House vote yesterday, Thursday, and passed. 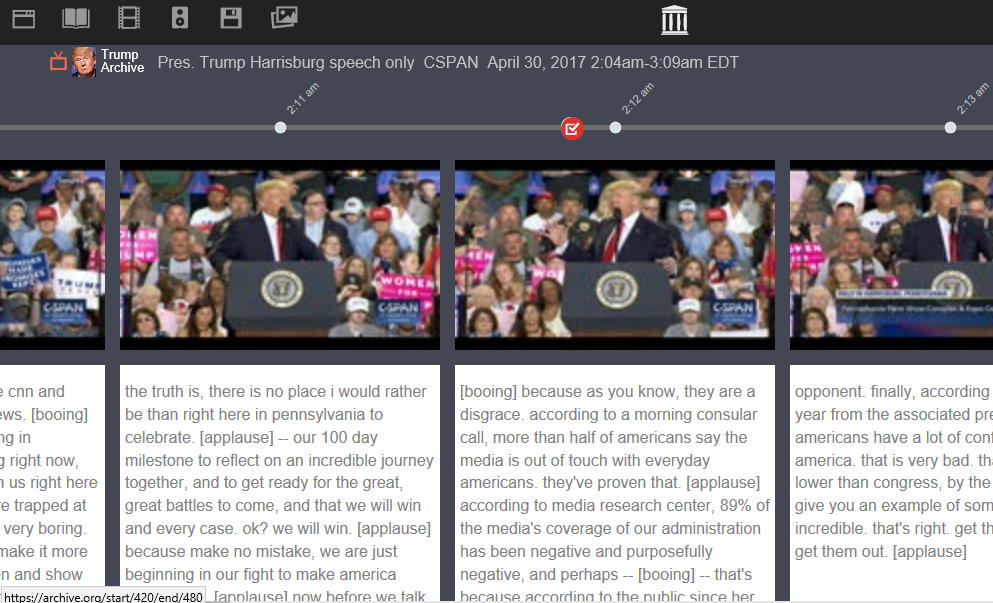 Trump’s Harrisburg address, as seen in context in the TV News Archive. Note Trump icon on top left, showing this show is part of the Trump Archive.

To peruse all the fact-checking work our partners have done on statements made on TV and archived in the TV News Archive, take a look at this table of more than 800 fact-checks of Donald Trump, his administration, and some congressional leaders. This collection will continue to grow as we develop the congressional collections, add more administration official statements, and integrate new statements and reporting.