In this week’s round up, we ask whether the eclipse eclipsed politicians on TV news; we hearken back to a 2016 political ad in which President Donald Trump talks about the wall he wants to build between the U.S. and Mexico; and finally, we link fact-checks from our national partners on the president’s speech in Phoenix, Arizona.

The total eclipse of the sun that was viewable coast to coast in the U.S. was big news this week–but not big enough to merit more mentions than President Donald Trump. The chart below illustrates how much coverage major cable news stations gave over a 24-hour period starting August 21 for the president and congressional leaders versus the solar eclipse. In every case, Trump got more air time than the celestial event; among congressional leaders, only House Speaker Paul Ryan, R., Wis., beat the sun, and then only on CNN (and that’s because CNN ran coverage of a town hall meeting he hosted that day). Of course, cable news shows, by their very nature, devote more time to politics than they do to science, and congressional leaders don’t have the public profile a sitting president does; nevertheless, here’s an example of how our TV news diet continues to be dominated by the president. 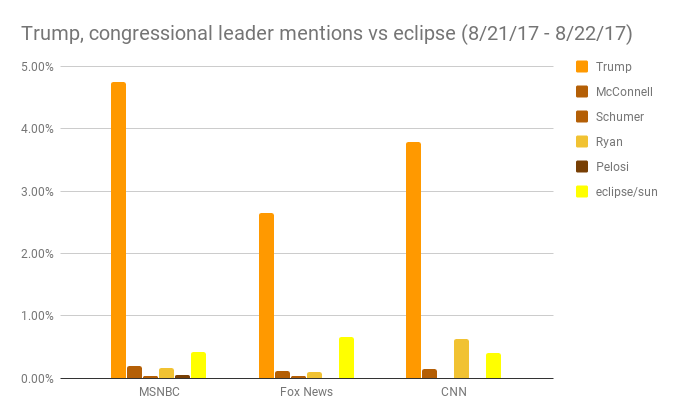 Trump on the wall

On August 22, at a rally in Phoenix, Trump raised the stakes on building his promised border wall between the U.S. and Mexico by threatening a government shut down over the issue: “[W]e are building a wall on the southern border, which is absolutely necessary…. [T]he obstructionist Democrats would like us not to do it, but believe me, we have to close down that government. We’re building that wall.”

Trump is keenly aware of his campaign promise that he would build a wall between the U.S. and Mexico; for example, the political nature of his promise–and that Mexico would pay for it–was a key theme of his phone conversation with Mexican President Enrique Peña Nieto following the election.

In January 2016, Trump’s campaign ran the following ad more than 1,400 times in key TV markets reaching voters in Iowa and New Hampshire, according to data analyzed by the TV News Archive’s Political Ad Archive. Interestingly, in the ad he talks about the wall–but not the promise to pay:

During the rally in Phoenix, Trump made many factual assertions that PolitiFact and FactCheck.org found wanting. (View the full rally here on the TV News Archive.) Among them: the president’s claim that “There aren’t too many people outside protesting,” which PolitiFact reporter Miriam Valverde rated as “false”:

“Thousands of people were out on the streets of Phoenix protesting Trump’s speech, according to multiple media accounts and the Phoenix police chief, who said the city’s downtown had “tens of thousands” of people exercising their right to free speech….Trump significantly underestimated crowds in Phoenix.”