Now it’s easier to find fact checks of specific statements by President-elect Donald Trump in our new Trump Archive, an experimental collection of TV news clips featuring Trump–including fact checks of his press conference on January 11, his first since July 2016.

We’ve got 500+ fact checks by FactCheck.org, the Pulitzer-prize winning PolitiFact, and The Washington Post‘s Fact Checker embedded within the Trump Archive; these are now viewable on this dedicated page, with the option of downloading a csv containing links to fact checks, links to TV news clips, date of airing, and topics covered. 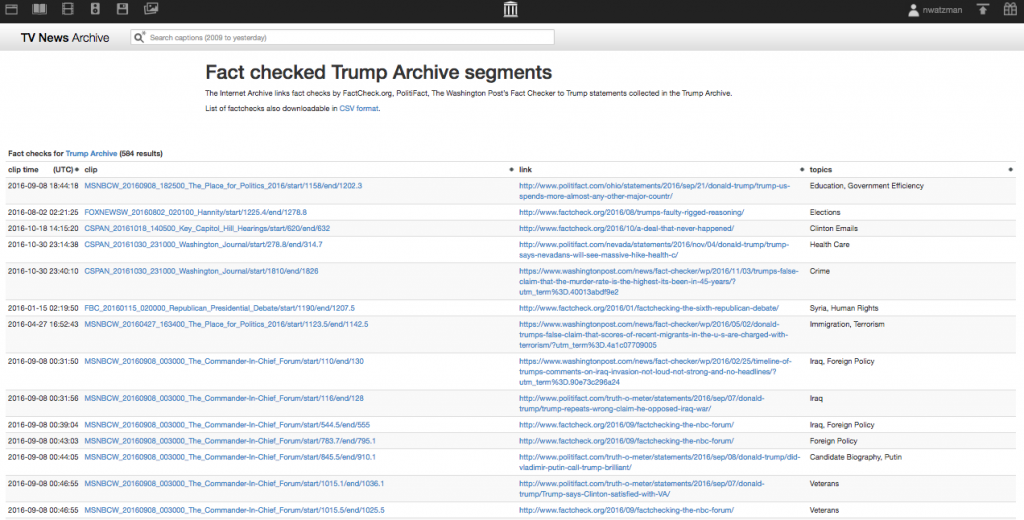 The Internet Archive’s Trump Archive launched on January 5 with 700+ televised speeches, interviews, debates, and other news broadcasts related to President-elect Donald Trump, and it continues to grow.

We created the Trump Archive in response to journalists and scholars who had trouble finding clips of Trump speaking through the caption search function in our TV News Archive library. We are hand-curating this collection as an experimental prototype for learning how to engineer solutions so similar archives can be created–whether by the Internet Archive or members of the public–about other elected officials and topics of interest. We are looking for collaborative partners to explore artificial intelligence approaches to creating such collections, with an ease and scale far beyond what can be accomplished now by hand.

The list of fact checks in the Trump Archive includes claims made by Trump during his press conference on January 11 covering issues from health care to ISIS to Trump’s connections to Russia. Here’s a sampling.

Trump said: “Obamacare is a complete and total disaster. It’s imploding as we said. Some states have over 100 percent increase.”

FactCheck.org: “Only Arizona has an average increase that high, and 84 percent with marketplace coverage in 2016 received tax credits to purchase insurance.”

The Washington Post‘s Fact Checker: “Trump exaggerates here, and appears to misunderstand a fundamental part of the Affordable Care Act. State-by-state weighted average increases range from just 1.3 percent in Rhode Island to as high as 71 percent in Oklahoma. But the most common plans in the marketplace in 2017 experienced an average increase of 22 percent. These plans have been used as the benchmark to calculate government subsidies.”

Trump: “I mean if you look, this administration created ISIS by leaving at the wrong time. The void was created, ISIS was formed.”

FactCheck.org: “Trump continues to oversimplify the situation by placing the entirety of the blame for the creation of ISIS on Obama’s decision to withdraw troops from Iraq.”

PolitiFact: “This is a more tempered version of Trump’s previous Pants on Fire claim that Obama and Clinton “founded ISIS.” Experts told PolitiFact that you can reasonably criticize the Obama administration’s withdrawal from Iraq, lack of support to anti-Assad rebels in Syria, and intervention in Libya for contributing to the power of ISIS. But the timeline was set in motion by the Bush administration.”

Trump: “I have no deals that could happen in Russia, because we’ve stayed away. And I have no loans with Russia.”

PolitiFact:  “It’s true that Trump has yet to build a hotel or tower in Russia, but he has eyed the Moscow skyline for decades.

We don’t know for sure about the extent of Trump’s business dealings in Russia, because he hasn’t released his tax returns. But his son, Donald Trump Jr., said in a 2008 real estate conference that “Russians make up a pretty disproportionate cross-section of a lot of our assets.”

We do know that Trump agreed to host the Miss Universe pageant in Moscow in 2013, a $20 million deal facilitated by a Russian real estate mogul and billionaire Aras Agalarov. (Trump also cameoed in Agalarov’s son’s dance-pop music video). He also made millions selling a 17-bedroom Florida mansion to a Russian billionaire.

The Washington Post‘s Fact Checker: “Trump is being misleading when he says he has stayed away from Russia. Trump repeatedly sought deals in Russia. In 1987, he went to Moscow to find a site for luxury hotel; no deal emerged. In 1996, he sought to build a condominium complex in Russia; that also did not succeed. In 2005, Trump signed a one-year deal with a New York development company to explore a Trump Tower in Moscow, but the effort fizzled.

In a 2008 speech, Donald Trump Jr. made it clear that the Trumps want to do business in Russia, but were finding it difficult. “Russians make up a pretty disproportionate cross-section of a lot of our assets,” Trump’s son said at a real estate conference in 2008, according to an account posted on the website of eTurboNews, a trade publication. “We see a lot of money pouring in from Russia.”