We are delighted to announce a new partnership with First Draft News, a nonpartisan organization dedicated to ferreting out misinformation online.

In its short existence–it was founded in June 2015–First Draft News has already spearheaded innovative projects that bring together news organizations, social technology companies, and human rights organizations to verify the information that flows to online audiences. First Draft also helps define the problem: in February, Claire Wardle, the group’s research director, published a helpful taxonomy of the different types of fake news and misinformation that proliferate online.

Example: with French elections fast approaching on April 23, 2017, First Draft News launched CrossCheck, a project combining the efforts of more than 37 newsroom partners, as well as journalism students across France and beyond. They’ve been working together to debunk false rumors and news reports in a much-watched contest pitting the far-right National Front leader Marine Le Pen against centrist Emmanuel Macron, defender of the European Union, as well as other candidates.

This partnership has quashed reports that 30 percent of Macron’s campaign funding comes from Saudi Arabia, that France is spending 100 million euros to buy hotels to house immigrants, and that the country is planning to replace Christian public holidays with Muslim and Jewish holidays, plus many more. These false stories had been shared thousands of times on social media.

When the elections are over, First Draft News will research whether CrossCheck’s efforts were effective, or how they may be modified to become more so. “CrossCheck is a living laboratory,” says Aimee Rinehart, manager of First Draft’s Partner Network. Wardle will lead the efforts to determine whether the CrossCheck model, where several news organizations sign off on a fact-check or verification, builds public trust in the media, an increasing problem worldwide.

Already, First Draft News partners rely heavily on the Internet Archive’s Wayback Machine to verify information online. With our new collaboration, we hope to increase use of other Internet Archive resources, including our searchable collection of TV news and curated archives such as the Trump Archive, with its linked fact-checks by national fact checking organizations. We also hope the collaboration provides valuable input for our plans to apply more tools of machine learning to the TV News Archive that could help inform reliable news reporting in the future. 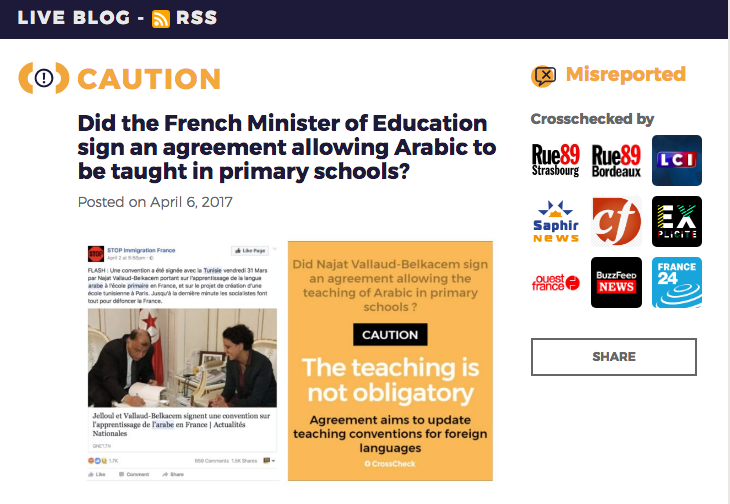