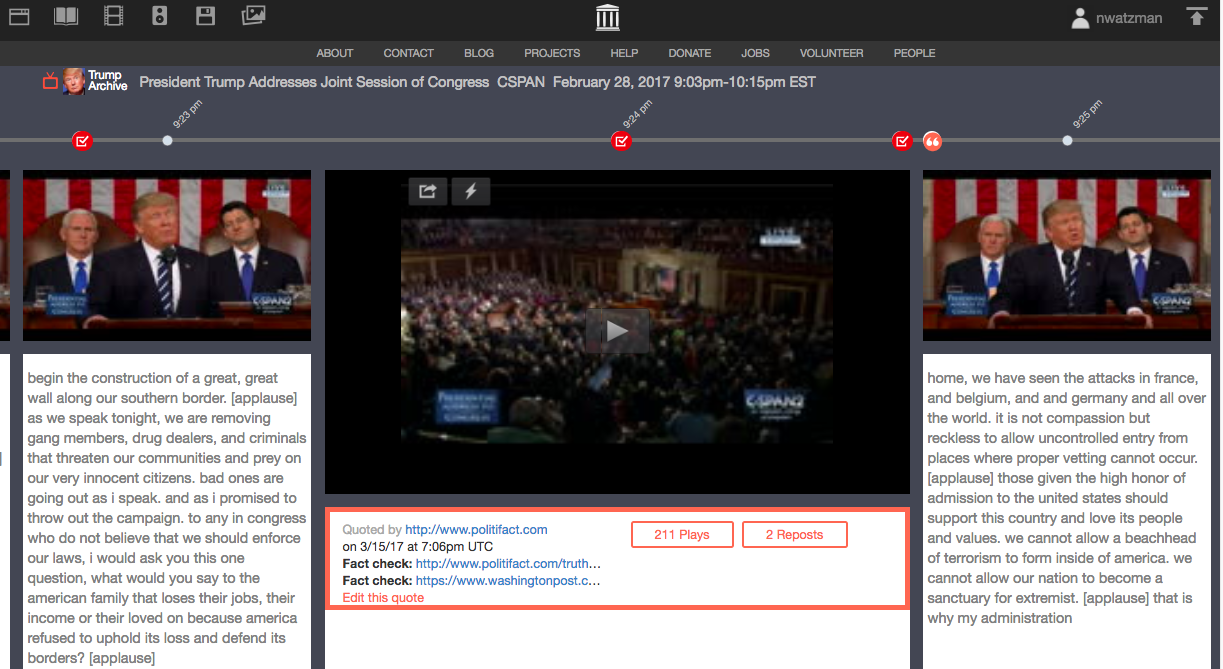 It was a yet another extraordinary week in U.S. politics, with a series of explosive news reports centering on President Donald Trump. The TV News Archive is saving history as it happens, as well as linking relevant fact-checks by FactCheck.org, PolitiFact, and The Washington Post‘s Fact Checker to statements by public officials.

On Sunday shows, Schumer demands release of tapes–if they exist

Senate Majority Leader Charles “Chuck” Schumer, D., N.Y., made the rounds of Sunday news talk shows, appearing on “Meet the Press” and “State of the Union,” calling for a special prosecutor to investigate possible connections between the Trump campaign and Russia among other matters. In this clip, Schumer says Trump should turn over tapes–the possibility of which were raised by Trump in a tweet on May 12–if they exist, of the president’s conversations with now former FBI director James Comey.

In this piece titled “Trump vs. Comey,” FactCheck.org reporters Eugene Kiely and Robert Farley trace the history of statements by the president and Comey about their discussions. They note, “White House Press Secretary Sean Spicer has repeatedly refused to answer whether Trump has such recordings. In his interview with Jeanine Pirro, Trump said, “Well, that I can’t talk about. I won’t talk about that.”

McMaster reacts to report that Trump shared intelligence with Russians

After The Washington Post reported, on May 15, that Trump had revealed “highly classified information” to Russian envoys visiting the White House last week, national security adviser H.R. McMaster defended the president that day and at a press conference the following day. Among his assertions: “The story that came out tonight as reported is false.”

“The key phrase is “as reported,” wrote Glenn Kessler, for The Washington Post’s Fact Checker, in a piece that dissects McMaster’s statements before the press. “With this language, McMaster in theory could dispute any element, no matter how small, as false. He notably did not say the story was false.” John Kruzel, writing for PolitiFact, traced the “shifting” explanations from the White House on what happened at the meeting with the Russians, including McMaster’s statements.

Wednesday, May 17 brought the news that the U.S. Department of Justice appointed Robert Mueller as a special counsel to investigate possible connections between Trump’s 2016 campaign and Russia. Here PolitiFact reporter Lauren Carroll gives the basics on Mueller’s background and experience.

The TV News Archive contains numerous historical clips of Mueller, who served as FBI director under  Presidents George W. Bush and Barack Obama, including this brief farewell interview he gave to ABC in 2013, where he talks about terrorism.

Mueller and Comey have an earlier association at a high-drama moment in U.S. history. In 2014, Comey told “60 Minutes” about the day that he and Mueller visited a bedridden John Ashcroft, then attorney general, to tell him they would resign rather than reauthorize a controversial domestic surveillance program under pressure from the White House. Ashcroft deferred to Comey, and, as recounted by The Los Angeles Times, “It was only when President George W. Bush agreed to listen to Comey and Mueller and restructure the program did resignation plans go away.”