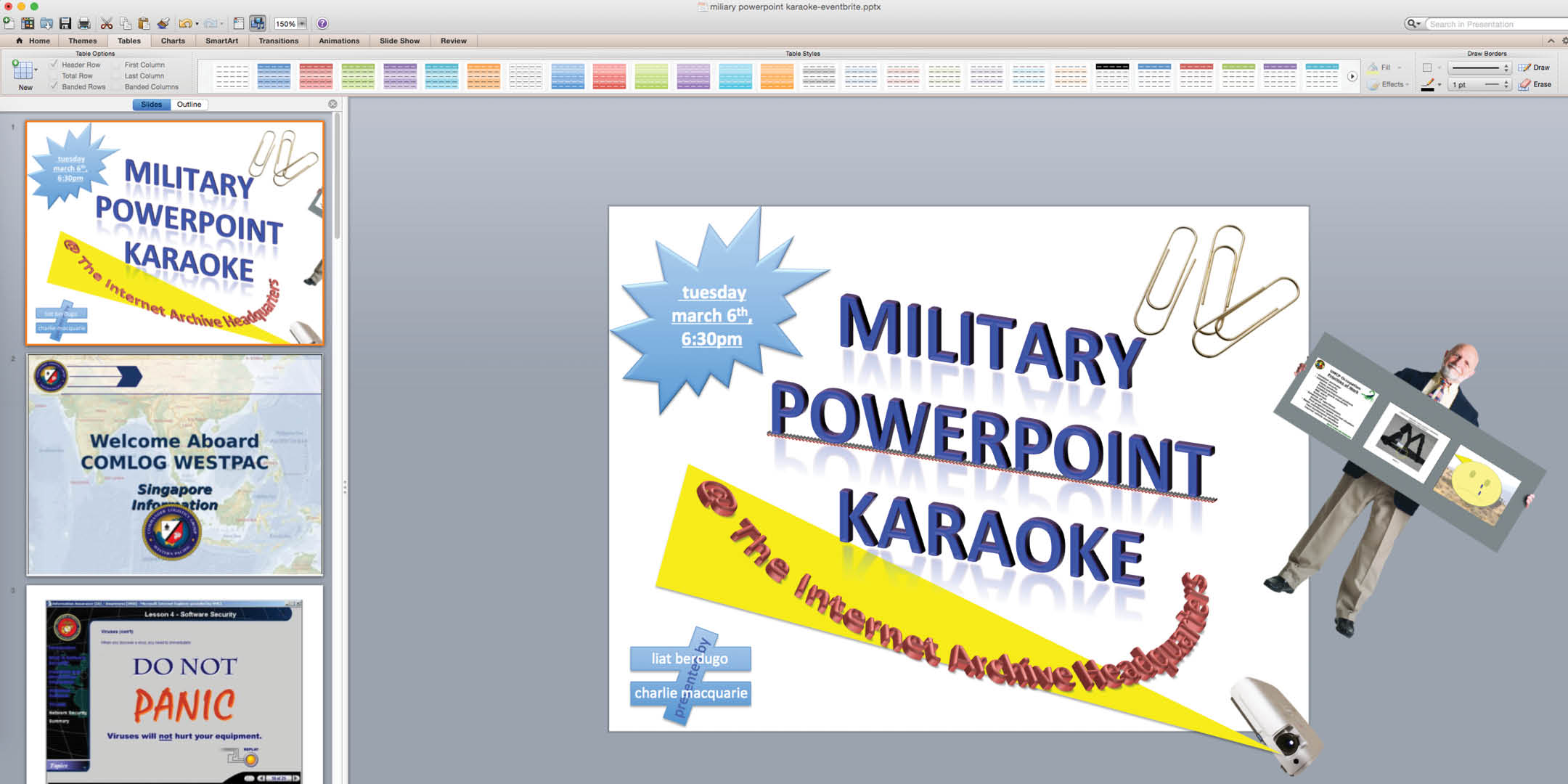 The Internet Archive presents the first ever Military Powerpoint Karaoke: a night of “Powerpoint Karaoke” using presentations in the Military Industrial Powerpoint Complex collection at archive.org that were extracted by the Internet Archive from its public web archive and converted into a special collection of PDFs/epubs. The event will take place on Tuesday, March 6th at 7:30pm at our headquarters in San Francisco. The show will be preceded by a reception at 6:30 pm, when doors will also open.

Also known as “Battle Decks,” Powerpoint Karaoke is an improvisational and art event where audience members give a presentation using a set of Powerpoint slides that they’ve never seen before. There are three rules: 1) The presenter cannot see the slides before presenting; 2) The presenter delivers each slide in succession without skipping slides or going back; and 3) The presentation ends when all slides are presented, or after 5 minutes (whichever comes first). We’re thrilled to have Rick Prelinger, creator of Lost Landscapes and Prelinger Archive, and Avery Trufelman of 99% Invisible, joining us to deliver headlining Powerpoint decks. The rest of the presentations will be delivered by you — the audience members who sign up.

This event will use, as its source material, a curated collection of the Internet Archive’s Military Industrial Powerpoint Complex, a special project alongside GifCities that was originally created for the Internet Archive’s 20th Anniversary in October 2016. For the project, IA staff extracted all the Powerpoint files from its archive of the government’s public .mil web domain. The collection was expanded in early 2017 to include materials collected during the End of Term project, which archived a snapshot of the .gov and .mil web domains during the administration change. The Military Industrial Powerpoint Complex collection contains over 57,000 Powerpoint decks, each charged with material that ranges from the violent to the banal, featuring attack modes, leadership styles, harness types, and modes for requesting vacation days from the US Military. The project was originally inspired by writer Paul Ford’s article, “Amazing Military Infographics” which can be found in the Wayback Machine. As a whole, this collection forms a unique snapshot into our government’s Military Industrial Complex.

This event is organized by artists/archivists Liat Berdugo and Charlie Macquarie in partnership with the Internet Archive.