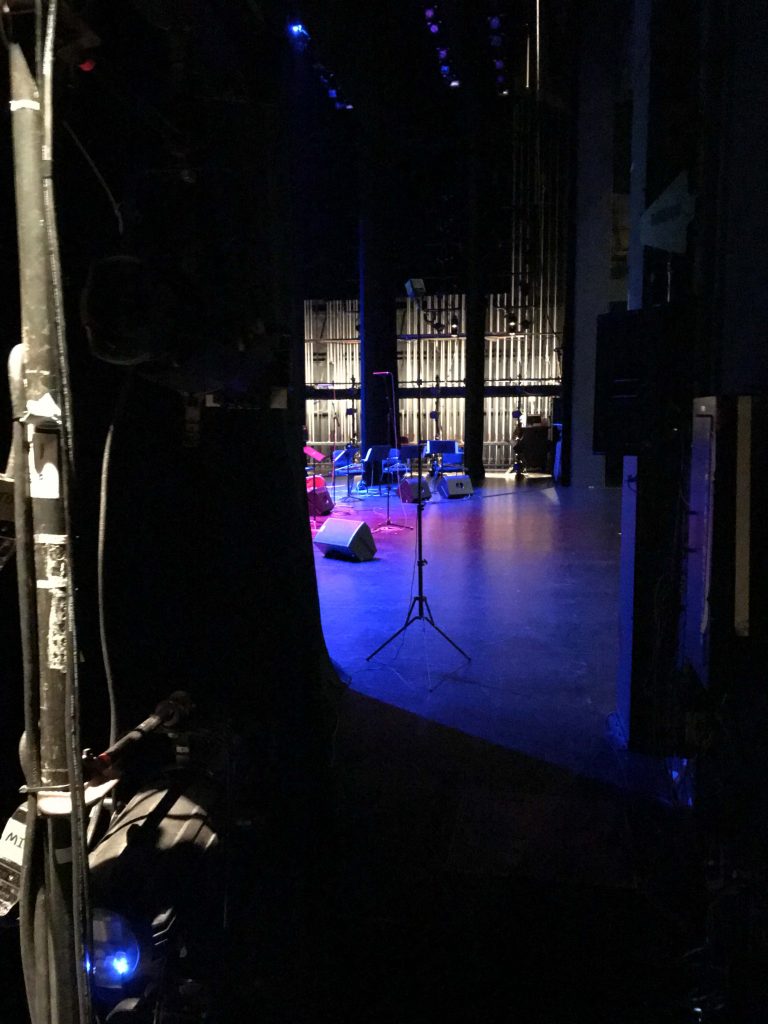 Silently, the performers took their places, tucked behind the thick black curtain. The members of the San Francisco Girls Chorus, led by director Valérie Sainte-Agathe, quickly flowed into two neat rows in the wings of the Yerba Buena Center for the Arts Theater. The stage crew snapped into their positions at the table covered with laptops, monitors, tape and cords. DJ Spooky, aka Paul D. Miller, appeared relaxed, a total picture of cool. Annie, our stage manager ran down the cues. “Take a moment to let your eyes adjust to the darkness… look for the mark at center stage. Oh, and please be very careful not to knock this very important stand of equipment that has been carefully set up by the tech crew.” 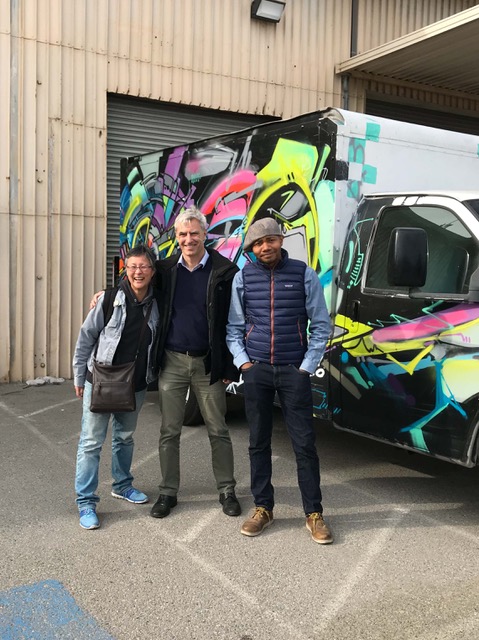 After a year of dreaming, scheming and aligning the stars with the artistic team, the big moment had finally arrived. As the Internet Archive’s project manager and coordinator of educational outreach, I had the amazing opportunity to work with DJ Spooky’s creative team for over a year to help put this multimedia experience. The Internet Archive and DJ Spooky’s QUANTOPIA: The Evolution of the Internet was ready to be presented before an audience for the very first time.

The world premiere performance of QUANTOPIA, the first of ten music commissions to receive major support from a Hewlett 50 Arts Commissions grant, would actually happen seven hours later. But, for the record, the very first audience to receive this new work was an audience of public school students and their teachers along with the families of the San Francisco Girls Chorus. 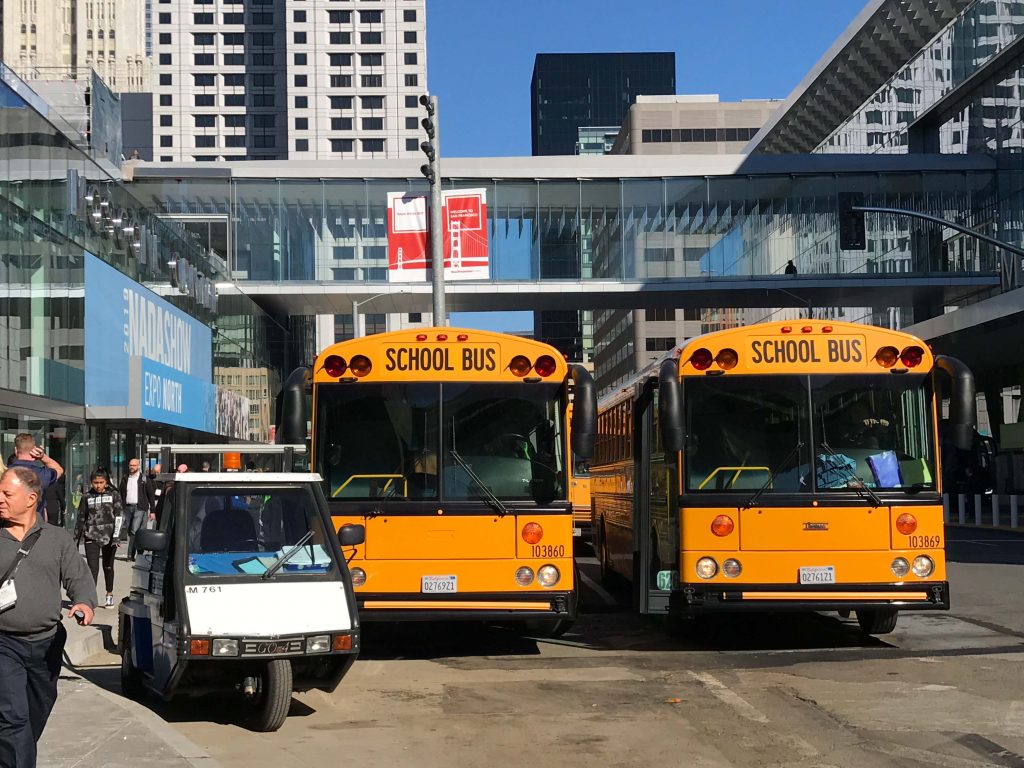 Funding from the Hewlett grant helped the Internet Archive to secure the caravan of school buses and vans that transported students from Visitacion Valley Middle School and Willie Brown Middle School in San Francisco to the Yerba Buena Center for the Arts Theater for this special school day performance. The field trip was the first of the year for these students. Some children got off the bus wide-eyed, sharing that they had never ever been to the theater or even this part of town. The visit was a unique opportunity to experience a work of art created by a talented and diverse team of collaborators, artists working together with technologists, drawing from the Internet Archive’s vast repository of knowledge. 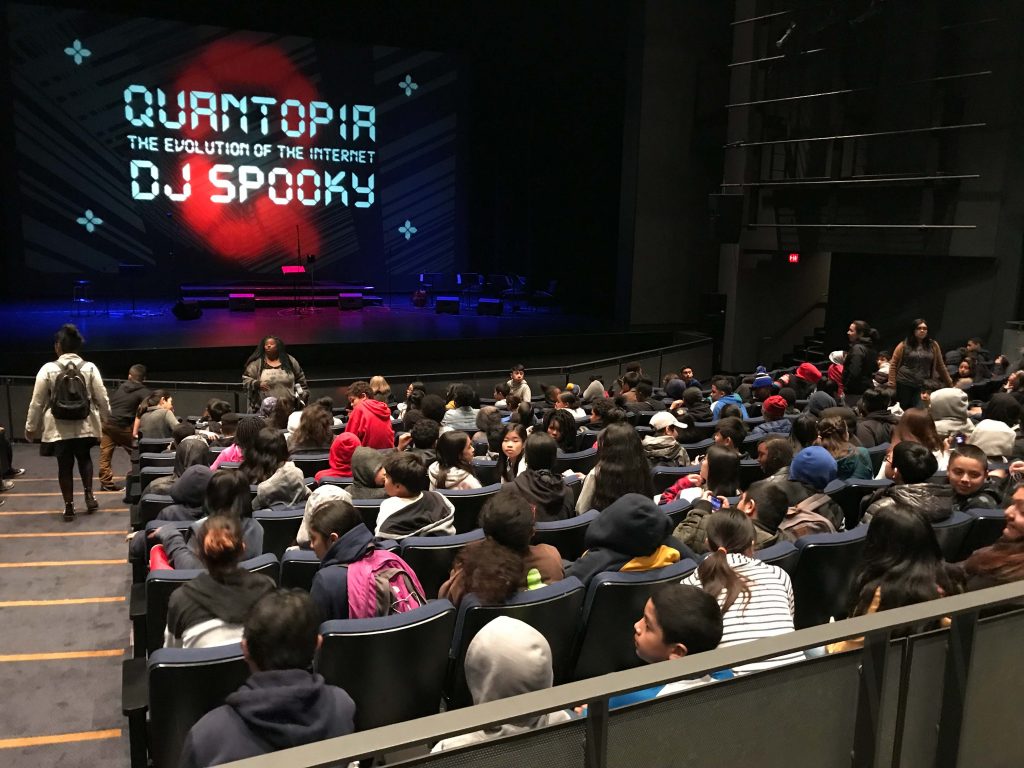 The arts, with their unique role in the shaping of personal identity and celebration of diversity, have had an important role in representing the collective culture the Bay Area. The Internet Archive is committed to the monumental task of recording and preserving, who we are and who we are becoming through text, image, sound and code. With this project, DJ Spooky and company learned first hand that the creative arts and technology can come together as equal partners in the pursuit of greater knowledge, with representation and justice for all. The performing arts calls for the audience to complete a circle of dialogue. Could we hold the door open and invite more people in? 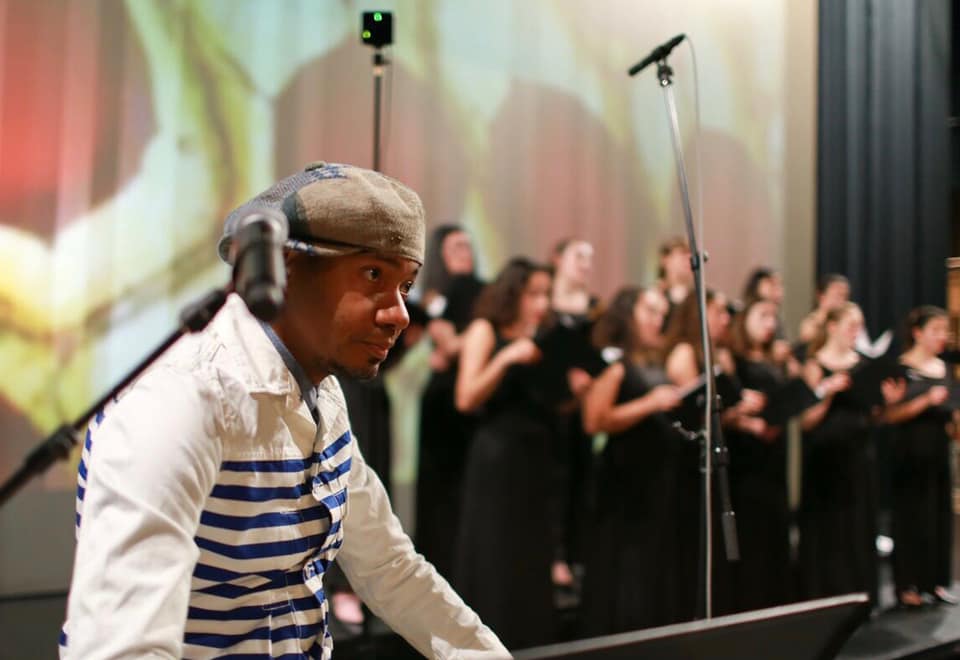 In his program notes, Paul D. Miller, aka DJ Spooky points out:

Today, according to the International Telecommunication Union, around
55.1% of the world’s population, more than 3.1 billion people, have access to the Internet. More will be joining in huge numbers over the next couple of years. As we move further into a world that is defined by information and how it shapes and molds all aspects of modern society, the Internet and its ancillary effects have resulted in the most complex systems architecture humanity has ever made.

After Dr. Leonard Kleinrock’s video introduction from the very spot that gave birth to the Internet when UCLA and Stanford first connected in 1969, DJ Spooky’s symphony opened with Movement I: Mimesis – De Revolutionibus. Layered over the bright rippling of electronic sounds, The San Francisco Girls Chorus, accompanied by the Classical Revolution string quartet, began to sing of the equal protections granted to all, text inspired by Article 19 of the UN Declaration of Human Rights.

Everyone has the right to freedom of opinion and expression; this right includes freedom to hold opinions without interference and to seek, receive and impart information and ideas through any media and regardless of frontiers.

A college-age usher later shared that when the music began, he noticed that students seemed a little confused. They leaned forward, listening intently. A look of surprise crossed their faces when they realized the ethereal sounds emanating from the stage were coming from the young artists of the SF Girls Chorus. I wonder if children are now more familiar with the ubiquitous sounds of technology than with the diverse expressive range of the natural human voice.

A moving timeline of media gleaned from the Internet Archive, flashed on the giant screen behind the chorus. Movement I of Quantopia presents the Internet as “a mirror of existing social, commercial and political structures.” Greg Niemeyer’s barcode forest invites the audience to consider the evolution of the Internet through fifty moments of technological, social, political and cultural importance. Imagine learning that the Internet has a history! For middle school students, the history of the Internet is a fait accompli. Most sixth graders were born in 2007—the year that Steve Jobs introduced the iPhone and changed how we access music. 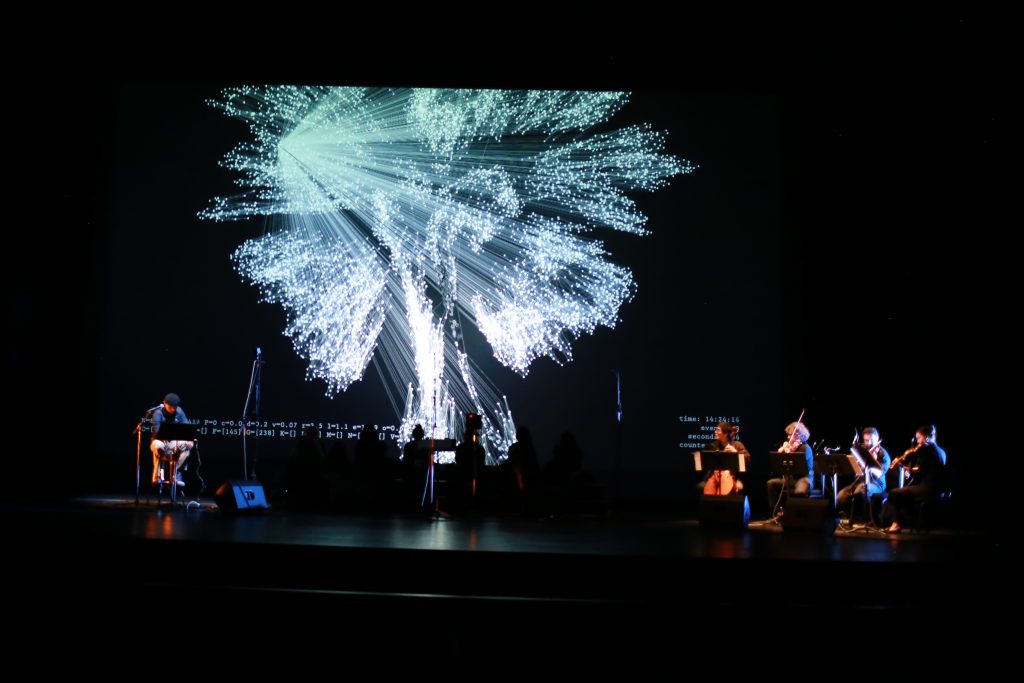 Movement II: Diegesis: Roots, Routes, Rights resurrected the ancient sounds of the dial up modem (which elicited delighted laugh of recognition from the evening crowd). This time, Article 19 was presented in binary code, zeros and ones sung by mezzo-soprano Eve Orenstein. The stage at YBCA lit up with awe-inspiring imagery of effortless complexity made possible by technology, a freestyle tour-de-force performed live from a laptop behind the curtain by Roger Antonsen. The computer scientist from the University of Norway casually described his role as “playing around with worlds,” using nodes and edges to render the birth and destruction of networks.

Later that evening, Internet Archive Founder and Digital Librarian Brewster Kahle and Emiko Ono of the Hewlett Foundation welcomed a sold out house to the World Premiere performance of QUANTOPIA.  The lights went down once again. This time the audience was a Bay Area blend of DJ Spooky super fans, students, technologists, YBCA subscribers, city officials, groups from Facebook and Lyft, representatives from Creative Commons, Hewlett 50 artists, and employees of Internet Archive— all ready and willing to experience something new.

One audience member told me, “There was a moment when the visuals, the music, especially the voices and melodies produced by the Girls’ Chorus and the quartet, produced a truly mystical/spiritual experience within the architectural environment.” Equally transporting—the African American spirituals that DJ Spooky weaves through his composition:

After the performance that evening, Wendy Hanamura, the Internet Archive’s Director of Partnerships, led an audience Q&A session with the QUANTOPIA creative team: Roger Antonsen, Paul D. Miller, Greg Niemeyer, Valérie Sainte-Agathe, Pax of Medium Labs.  “If you could embed a value into the code, what would that be?” Hanamura asked.  “Justice,” replied Niemeyer. 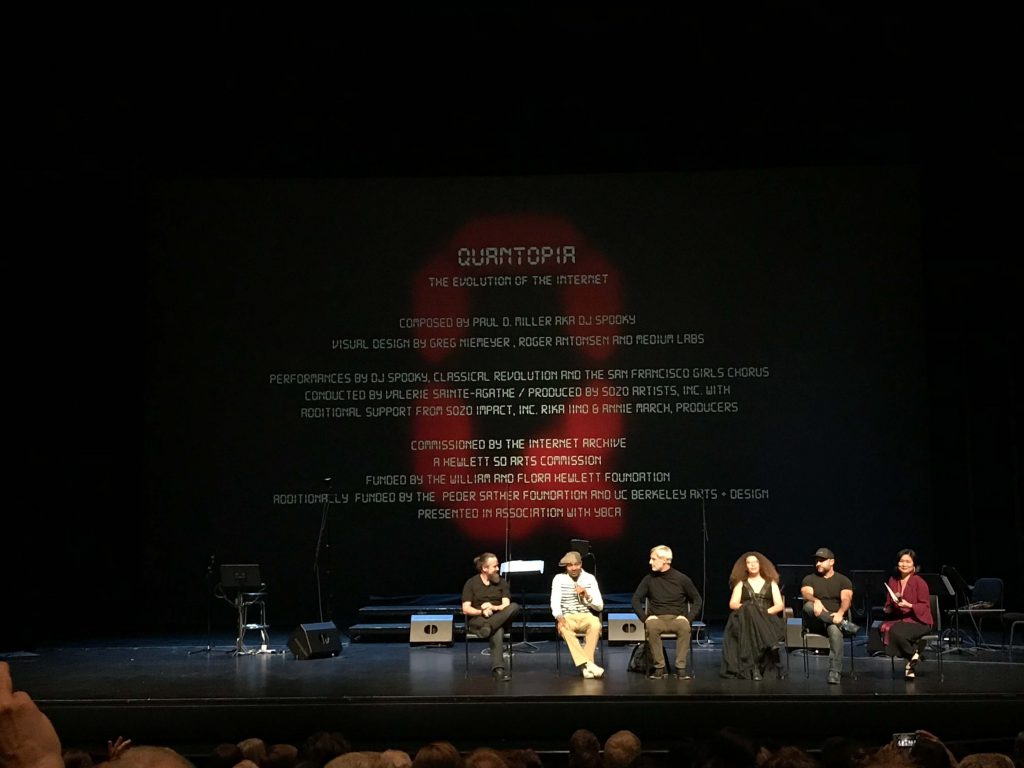 FINDING A CONNECTION: THE CREATION OF NETWORKS

In the lobby of the theater, we handed out Hewlett 50 Arts Commission Passports which included information on all of ten of the Class of 2017 grantees in musical composition. We encouraged audience members to stamp their passports with Internet Archive’s logo to record their attendance. We created this passport to be more than just a souvenir of a world premiere. My hope is that the passport will encourage our tech-centric audience to explore the nine other Hewlett-commissioned works.  Each work of arts presents an exciting world of new ideas and perspectives. You can also enjoy the fun challenge of collecting all of the stamps from each of the Hewlett 50 arts organizations. Gotta get ’em all! 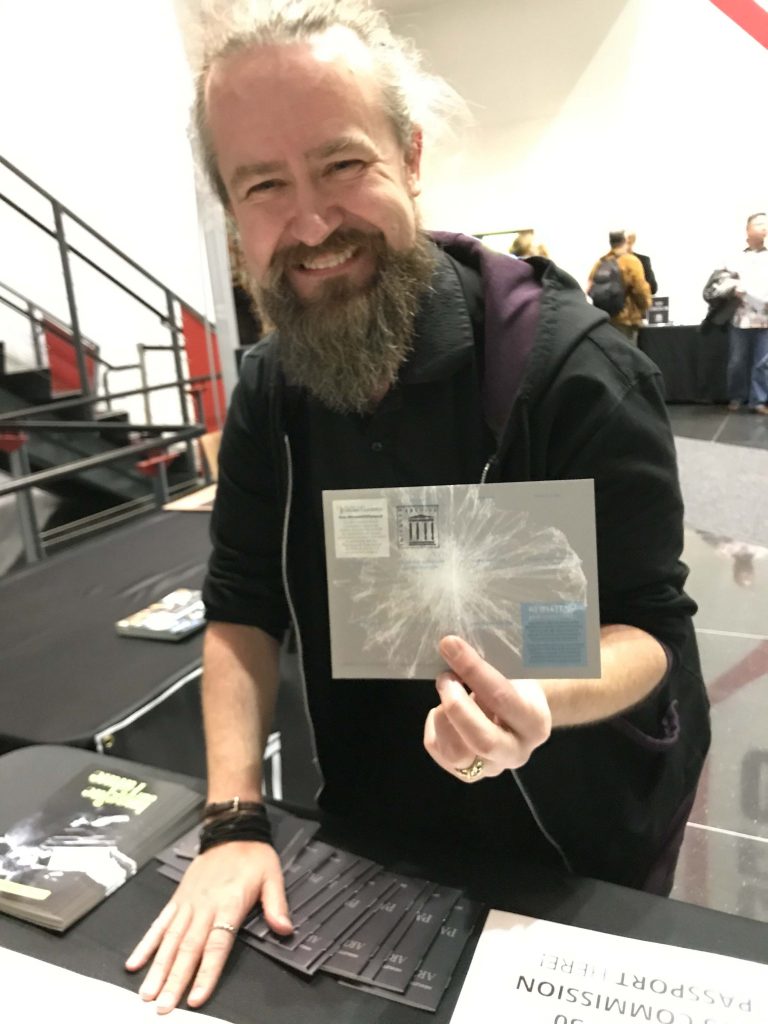 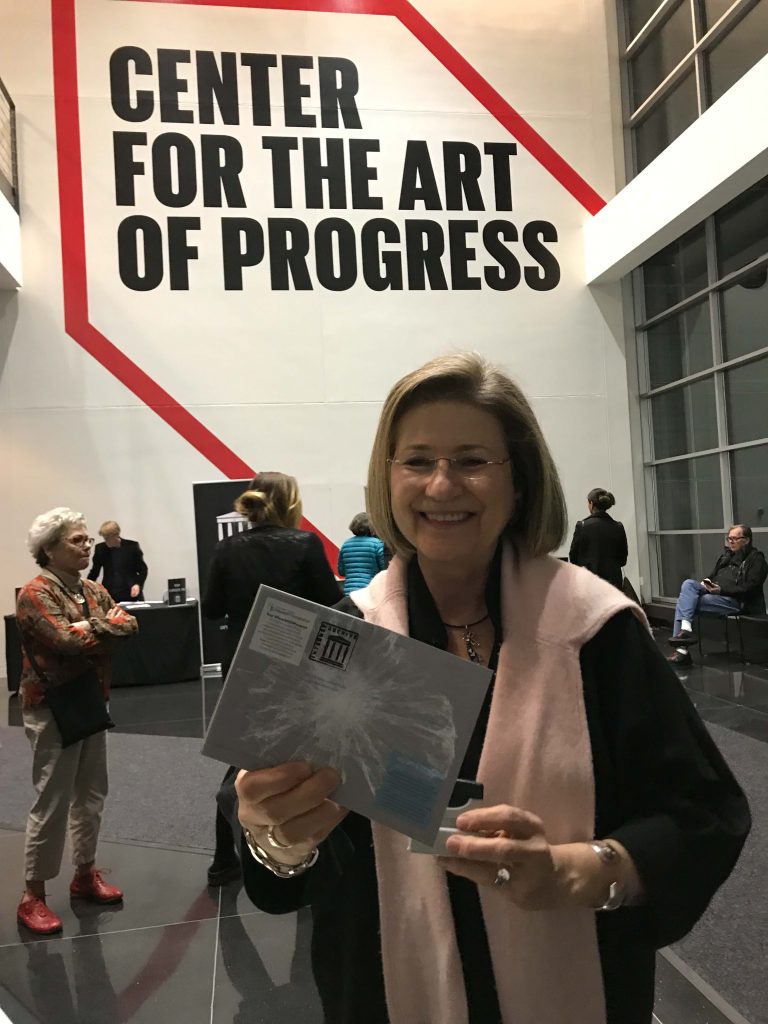 Patricia Kristof Moy of Kohl Mansion will present Jake Heggie’s dramatic vocal-chamber work, based on the true stories of The Violins of Hope, a set of more than 60 instruments, originally played by prisoners in concentration camps and ghetto residents during World War II. 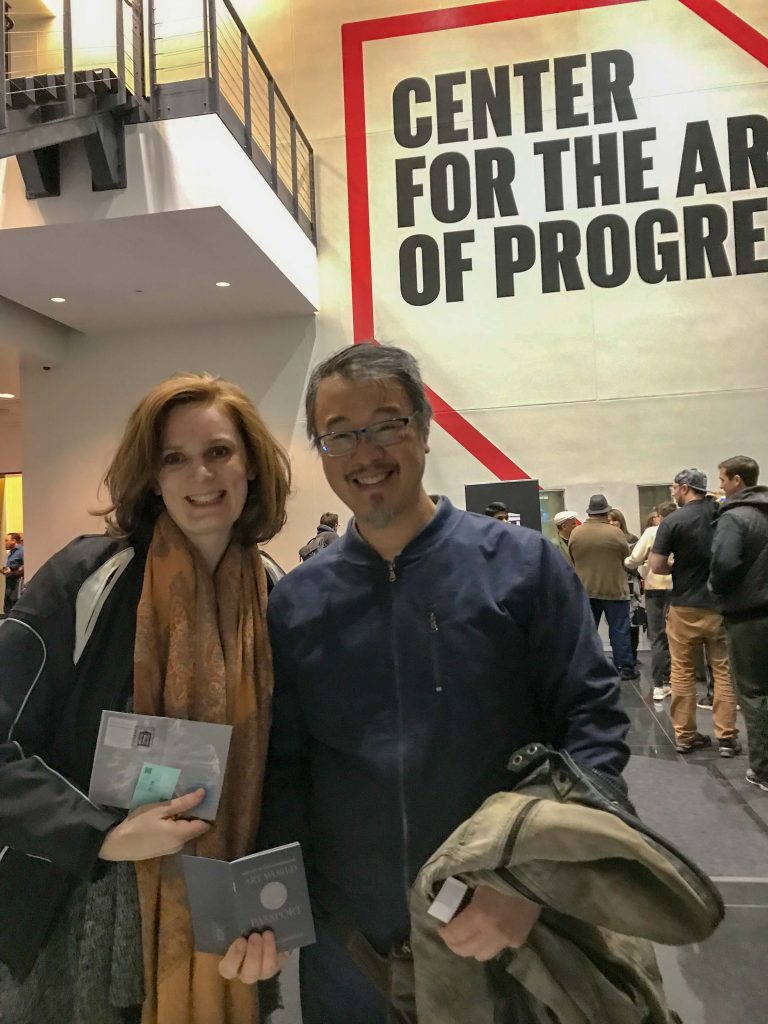 Katherine Bates and Charlton Lee of the Del Sol String Quartet. Their collaboration with composer Huang Ruo, The Angel Island Oratorio, will premiere on October 2020 on Angel Island. 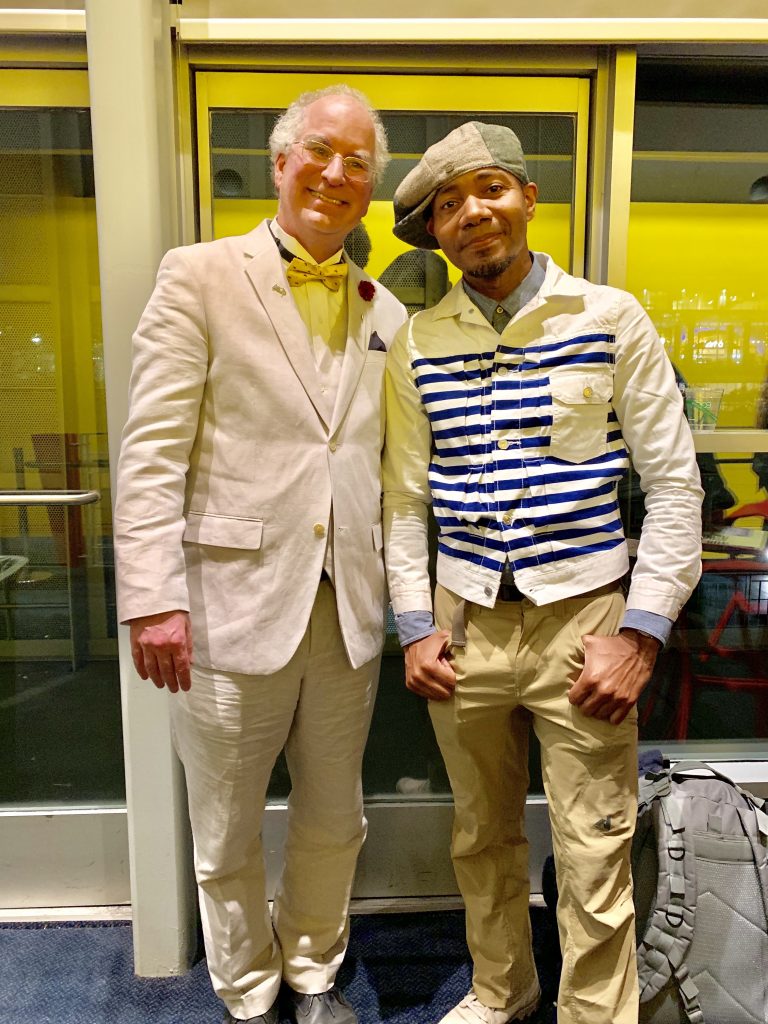 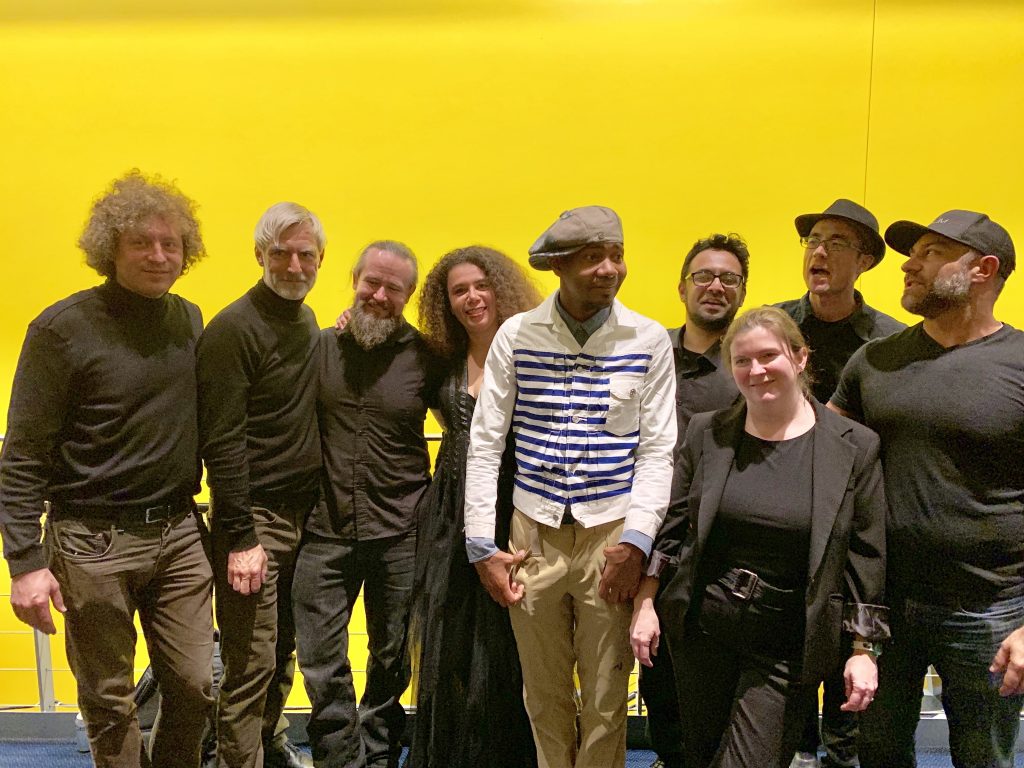 FINDING A CONNECTION: THE CREATION OF NETWORKS

At the Internet Archive, we’ve created an enduring online archive for QUANTOPIA to openly share and provide access to the work “across all frontiers.” It’s a model we’d like to offer to archive all works of art, which so often include text, webpages, video, audio and other ephemera. We see this as an exciting opportunity to develop new models of collaboration between the arts organizations, artists and audiences, as new works are created and continue evolving into the future. 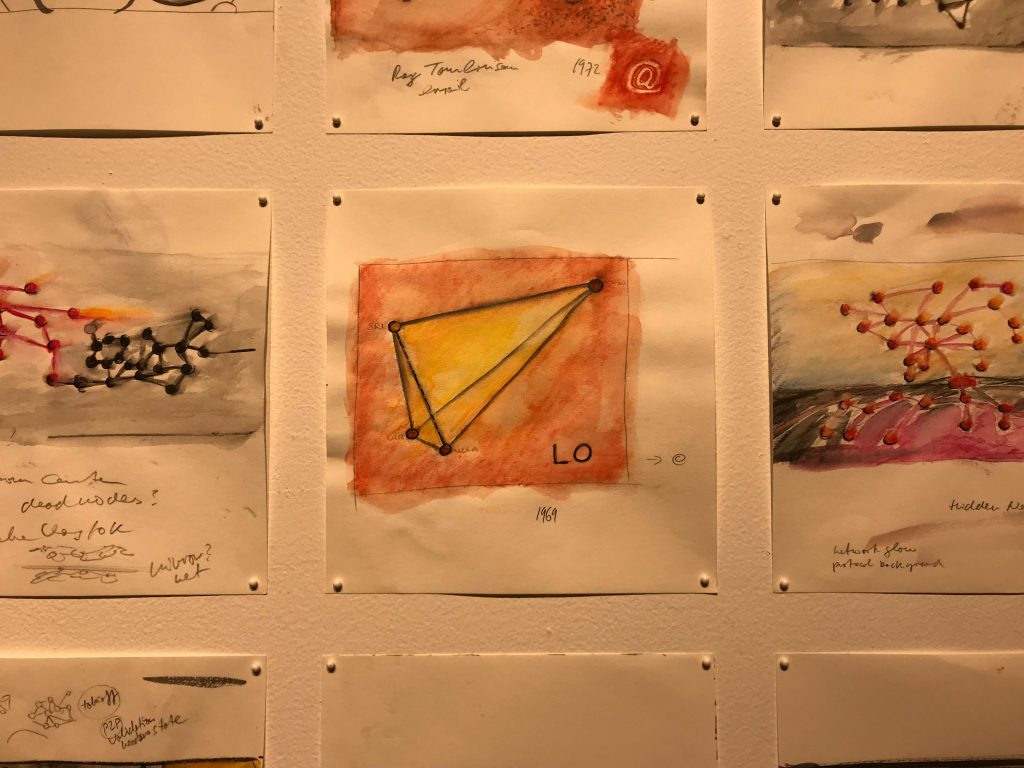 “LO” a sketch by Greg Niemeyer for the QUANTOPIA timeline. 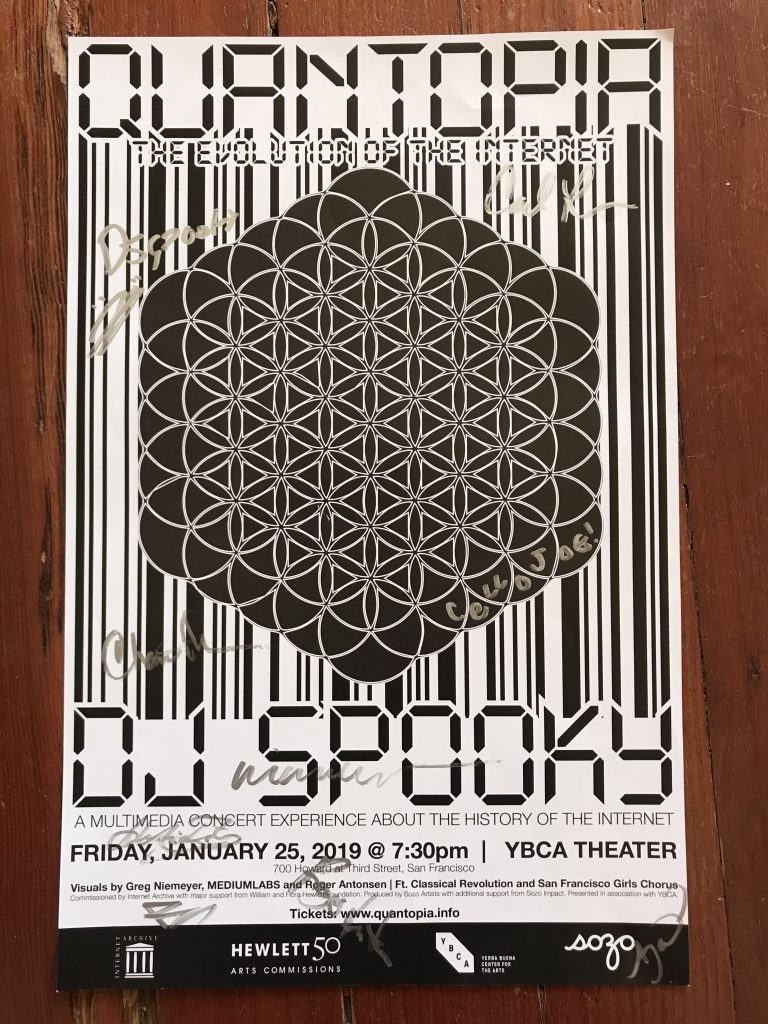 WHAT MAKES ME LOVE MUSIC SO MUCH?

The audience quieted when the tall young student, KyShawn, stepped up to the mike to ask the final question at the school day performance.  He asked DJ Spooky, “When did you know that you liked music?”

The artist took a deep breath before sharing his thoughtful response. He spoke of his parents who were both professors, and his childhood growing up in Washington, D.C., a place filled with the sounds of so many different styles of music. For Paul, music is not just music. Music is information.

We offered our thanks to the students for being such a great first audience and one by one, we left the stage. Behind the curtain, Paul smiled and noted how smart the student’s questions were.

After the Q&A, the children spilled outside into the bright light of day. Some voiced surprise at seeing so many people out and about, having lunch in the gardens or enjoying a stroll. The young people gathered at the edge of the sparkling reflecting pool, their voices ringing with excitement like grace notes over the roaring waters of “Revelation,” the nearby memorial dedicated to the memory of Dr. Martin Luther King, Jr.  Back at school,  teachers assigned KyShawn and his classmates to write their reflections on the day. Perhaps KyShawn’s essay captures what we all hoped to achieve over this year: music that inspires; music that creates empathy; music that heals.

WHAT MAKES ME LOVE MUSIC SO MUCH (by KyShawn)

What makes me love music so much is music inspires me.

Even though music exists in all cultures. To me, I love music. It helps me relax and think about others…

10 thoughts on “Reflections on the birth of QUANTOPIA, a New Work of Art”