In a time when many of us are being asked to shelter in place and work from home, a hearty reading list can be invaluable. One intriguing list I recently rediscovered was drawn up by the late E. Gary Gygax toward the end of the 1970s. While formalizing the advanced rule set for Dungeons & Dragons, a game he created with Dave Arneson, Gygax added an appendix to his Dungeon Master’s Guide listing the books that inspired him to create his fantasy role-playing game. “Upon such a base I built my interest in fantasy,” Gygax wrote, “being an avid reader of all science fiction and fantasy literature since 1950.” Over the years this reading list has become so well-known in the role-playing world that it’s merely referred to as Appendix N. Now the Internet Archive has created an online collection of Gygax’s famous list.

If you’re unfamiliar with Dungeons & Dragons, it’s a role-playing game set in a universe of sorcerers, elves, dragons, and dank underground lairs. While D&D’s fantasy world might sound like J. R. R. Tolkien’s The Lord of the Rings, Gygax’s Appendix N shows he drew from a wide field of fantasy and science-fiction authors: R. E. Howard (creator of Conan), H. P. Lovecraft, Fritz Leiber (whom it’s believed coined the phrase “sword & sorcery”), Michael Moorcock, and yes, J. R. R. Tolkien. Some names on the list might surprise you, such as Leigh Brackett, whose screenwriting credits include the film noir The Big Sleep and John Wayne’s Rio Bravo. (Gygax probably included her for her planetary romances set on Mars, however.) Others would have faded into obscurity if not for Gygax’s list.

Forty years after it was published, Appendix N has taken on a life of its own within the role-playing community. Gygax’s list has been studied, dissected, and emulated. There’s even an Appendix N Book Club. Blogger James Maliszewski called Appendix N the “literary DNA” of D&D.

If you’re interested in expanding your diet of fantasy books, or you’re curious where the D&D phenomenon all started, you’re in luck. Internet Archive has many of the books on Gygax’s reading list available for borrowing. When Gygax was asked in 2007 if he would change any of the selections, he replied, “I wouldn’t change the list much, other than to add a couple of novels.” Internet Archive has a few of those later additions available as well. Happy reading!

Jim Nelson is a science fiction reader & writer, in addition to being one of the Internet Archive’s core engineers. Prior to joining the Internet Archive, Jim was lead engineer and Executive Director of the Yorba Foundation, an open-source nonprofit. Jim also writes books and short fiction, including the dystopian novel “Bridge Daughter.” You can read more at j-nelson.net.

In B. Traven’s The Death Ship, American sailor Gerard Gales finds himself stranded in post-World War I Antwerp after his freighter departs without him.  He’s arrested for the crime of being unable to produce a passport, sailor’s card, or birth certificate—he possesses no identification at all.  Unsure how to process him, the police dump Gales on a train leaving the country. From there Gales endures a Kafkaesque journey across Europe, escorted from one border to another by authorities who do not know what to do with a man lacking any identity.  “I was just a nobody,” Gales complains to the reader.

As The Death Ship demonstrates, the concept of verifiable identity is a cornerstone of modern life.   Today we know well the process of signing in to shopping websites, checking email, doing some banking, or browsing our social network.  Without some notion of identity, these basic tasks would be impossible.

That’s why at the Decentralized Web Summit earlier this year, questions of identity were a central topic.  Unlike the current environment, in a decentralized web users control their personal data and make it available to third-parties on a need-to-know basis.  This is sometimes referred to as self-sovereign identity: the user, not web services, owns their personal information.

The idea is that web sites will verify you much as a bartender checks your ID before pouring a drink.  The bar doesn’t store a copy of your card and the bartender doesn’t look at your name or address; only your age is pertinent to receive service.  The next time you enter the bar the bartender once again asks for proof of age, which you may or may not relinquish. That’s the promise of self-sovereign identity. 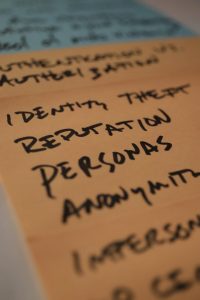 At the Decentralized Web Summit, questions and solutions were bounced around in the hopes of solving this fundamental problem.  Developers spearheading the next web hashed out the criteria for decentralized identity, including:

One problem with decentralized identity is that these problems often compete, pulling in polar directions.

For example, while security seems like a no-brainer, with self-sovereign identity the end-user is in control (and not Facebook, Google, or Twitter).  It’s incumbent on them to secure their information. This raises questions of key management, data storage practices, and so on. Facebook, Google, and Twitter pay full-time engineers to do this job; handing that responsibility to end-users shifts the burden to someone who may not be so technically savvy.  The inconvenience of key management and such also creates more hurdles for widespread adoption of the decentralized web.

The good news is, there are many working proposals today attempting to solve the above problems.  One of the more promising is DID (Decentralized Identifier).

A DID is simply a URI, a familiar piece of text to most people nowadays.  Each DID references a record stored in a blockchain. DIDs are not tied to any particular blockchain, and so they’re interoperable with existing and future technologies.  DIDs are cryptographically secure as well.

DIDs require no central authority to produce or validate.  If you want a DID, you can generate one yourself, or as many was you want.  In fact, you should generate lots of them.  Each unique DID gives the user fine-grained control over what personal information is revealed when interacting with a myriad of services and people.

If you’re interested to learn more, I recommend reading Michiel Mulders’ article on DIDs, “the Internet’s ‘missing identity layer’.”  The DID working technical specification is being developed by the W3C.  And those looking for code and community, check out the Decentralized Identity Foundation.

(While DIDs are promising, it is a nascent technology.  Other options are under development.  I’m using DIDs as an example of how decentralized identity might work.)

What does the future hold for self-sovereign identification?  From what I saw at the Decentralized Web, I’m certain a solution will be found.