Take the revamped Television Explorer for a spin.

Here’s what we found when we used the new tools to track the use of the term, “cryptocurrency.” The rapid ascent, and sometimes fall, of the value of cryptocurrencies such as bitcoin have led to rises and dips in TV news coverage as well. In May 2017, international TV news channels began to run stories featuring the term, rapidly increasing in November and peaking just last week with BBC News. Television Explorer shows that Deutsche Welle led the pack ahead of BBC News and Al Jazeera in covering cryptocurrency. Among US networks, Bloomberg uses the term more than twice as often as Deutsche Welle. A search of the term bitcoin shows a similar trajectory, with CNBC coverage spiking December 11, 2017, a few days before bitcoin hit its historic peak in value to date.

Within a broader analysis of how responses to the most recent school shooting compare with others, The Washington Post’s Philip Bump used TV News Archive closed caption data using GDELT’s Television Explorer to examine the pattern of use of the term “gun control” on CNN, Fox, and MSNBC. “After the mass shooting in Las Vegas last October, a political discussion about banning ‘bump stocks’ — devices that allowed the shooter to increase his rate of fire — soon collapsed.” “So far, the conversation after Parkland looks similar to past patterns.”

“I never said Russia did not meddle in the election”

Reacting to the indictments of Russian nationals by Special Counsel Robert Mueller, President Donald Trump wrote, “I never said Russia did not meddle in the election, I said, ‘It may be Russia, or China or another country or group, or it may be a 400 pound genius sitting in bed and playing with his computer.’ The Russian “hoax” was that the Trump campaign colluded with Russia – it never did!”

The Washington Post’s Fact Checker, Glenn Kessler: “According to The Fact Checker’s database of Trump claims, Trump in his first year as president then 44 more times denounced the Russian probe as a hoax or witch hunt perpetuated by Democrats. For instance, here’s a tweet from the president after reports emerged about the use of Facebook by Russian operatives, a key part of the indictment: ‘The Russia hoax continues, now it’s ads on Facebook. What about the totally biased and dishonest Media coverage in favor of Crooked Hillary?’”

PolitiFact’s Jon Greenberg:  “Pants on Fire!” The president “called the matter a ‘made-up story,’ and a ‘hoax.’ He has said that he believes Russian President Putin’s denial of any Russian involvement. He told Time, ‘I don’t believe they (Russia) interfered.’”

In an analysis of Fox News, CNN, and MSNBC during the 72 hours following the announcement of the indictment of 13 Russians, Vox’s Alvin Chang used TV News Archive closed captioning data and the GDELT Project’s Television Explorer to show “how Fox News spun the Mueller indictment and Florida shooting into a defense of the president.” Chang uses the data to show that “[I]nstead of focusing on the details of the indictment itself, pundits on Fox News spent a good chunk of their airtime pointing out that this isn’t proof of the Trump administration colluding with Russia.” 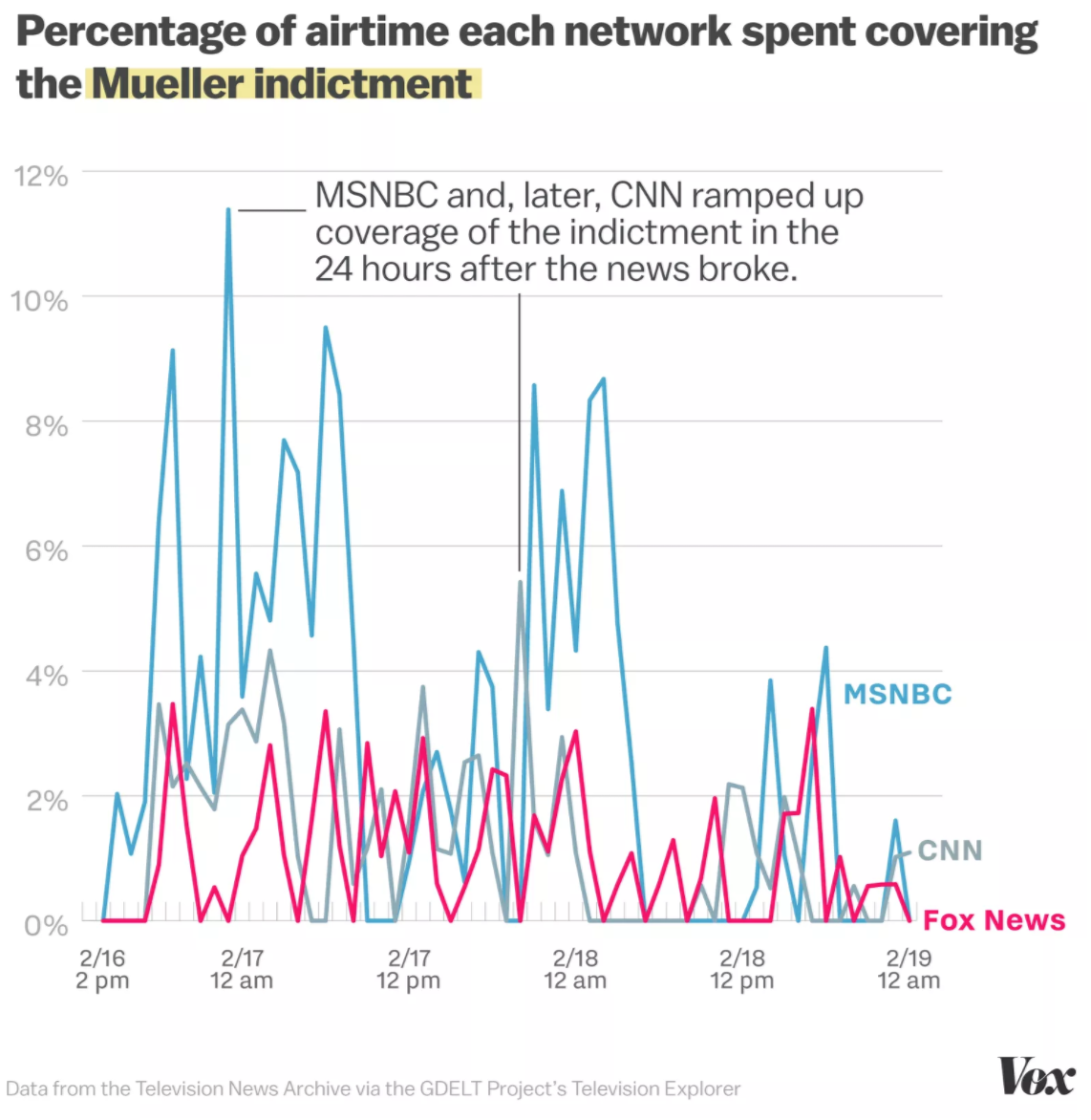 TV news coverage and analysis in one place

Scholars, pundits, and reporters have used the data we’ve created here in the TV News Archive in ways that continue to inspire us, adding much-needed context to our chaotic public discourse as seen on TV.  All that content is now in one place, showcasing the work of these researchers and reporters who turned TV news data into something meaningful. 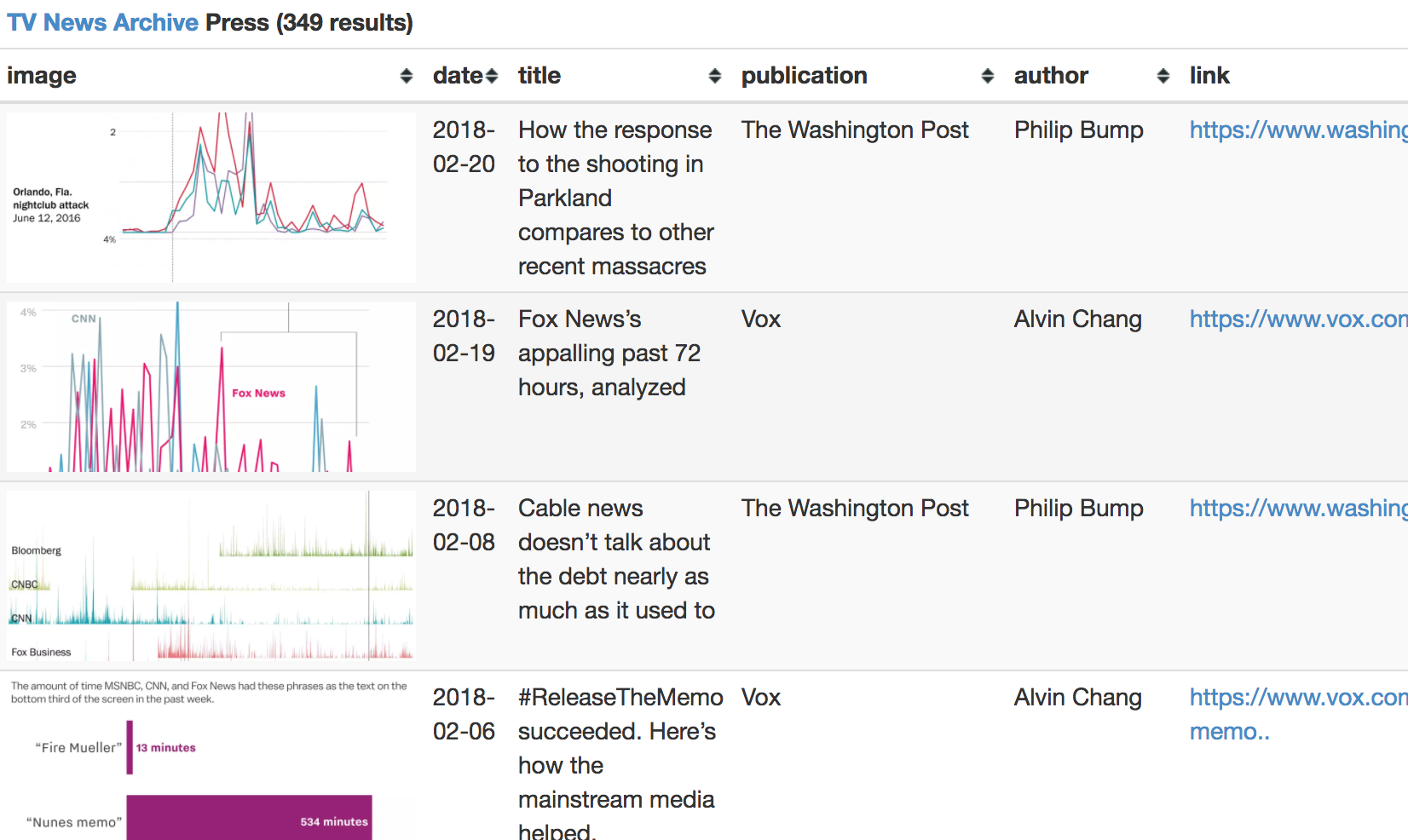