We changed our name! Our weekly updates from the TV News Archive are now titled TV News Record, to reflect our goal of providing many ways for viewers to put the news in context, whether through fact checks from our national fact-checking partners, visualizations of patterns of news coverage, or other ways of using TV news metadata to deepen analysis of the news.

This week we present fact-checks by fact-checking groups of claims about gang arrests, fraudulent votes, the Russia investigations, and Medicaid. But first, some observations about cable news coverage of news this week and realized hopes for the newest Supreme Court Justice Neil Gorsuch by the religious right.

In a stark reminder of how which cable channel you watch affects what news you see, Dave Weigel of The Washington Post noted this week that while health care was big news on Capitol Hill Tuesday evening, Fox cable stations were busy reporting on the fallout over a retracted story by CNN related to Russia investigations: “The network’s prime-time shows, ratings kings of cable news, ignored the health-care story,” he wrote. Meanwhile, “The CNN story, sparked by a retracted report on Russia and Trump and inflamed by the sting video, sprawled across multiple segments.”

Weigel’s analysis is borne out by plugging key search terms into the Television Explorer, a tool built by data scientist Kalev Leetaru fueled by TV News Archive data. Search for the term “retraction” near “story” over the 72-hour period ending on June 30, and Fox news dominates.

The converse is also true: a similar search for “health care” near “Senate” yielded the following results, with CNN  devoting the most attention to the story, and more than four times as much as Fox News did.

Such searches are easily done on Television Explorer. With the explosion of coverage over the past 24 hours about President Donald Trump’s tweets about MSNBC “Morning Joe” co-hosts Mika Brzezinski and Joe Scarborough, we’re keeping on eye on this search of “Trump” near “tweet.” Questions? Contact tvnews@archive.org. 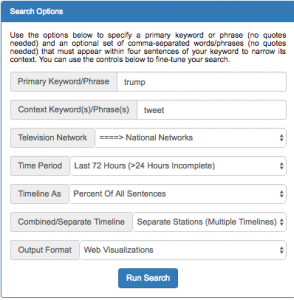 In the lead up to the Senate’s confirmation of Neil Gorsuch as the newest member of the U.S. Supreme Court earlier this year, many commentators noted that his appeal to conservatives was enhanced by his stance on religious issues. With the conclusion of the Court’s term on Monday, Gorsuch’s champions were vindicated with his decisions in such matters as Trinity Lutheran Church of Columbia, Inc. v. Comer, in which Gorsuch sided with the majority affirming that a church was eligible for public funding to build a playground. Here is CNN reporter Ariane de Vogue back in April 2017 explaining why the case matters:

And now on to this week’s highlighted TV news fact-checks.

Claim: MS-13 gang members are being deported by the thousands (hundreds)

Michelle Ye Hee Lee reported for the Washington Post’s Fact Checker that while the Trump administration has increased enforcement against gang activity, deportations “are in the hundreds, not the thousands, under Trump.”  The reporters at FactCheck.org concurred, and quoted Danielle Bennett, a spokesperson for U.S. Immigration and Customs Enforcement, who said the agency “does not track gang removals by specific gang.”

In a recent TV interview, President Trump said “I can say that the people that have been hired (for the independent Russia investigation) are all Hillary Clinton supporters, some of them worked for Hillary Clinton.”

For PolitiFact, Manuela Tobias reported “Three of the eight available Mueller hires made campaign contributions to Clinton, which undermines Trump’s statement that all are Clinton supporters. Furthermore, none of them have worked for Clinton directly. Two represented either the Clinton Foundation or an aide, never her, and working for WilmerHale, which has also represented key members of Trump’s White House.”

White House adviser Kellyanne Conway said on Sunday about the proposed GOP health care legislation, “If you became a Medicaid recipient through the Obamacare expansion, you are grandfathered in.”

Joshua Gillin reported for PolitiFact, “The ‘grandfathered expansion enrollees’ would have to maintain near-continuous coverage, with no breaks of more than a month, in order to get the higher rate.” He continued, “Continuous coverage can be hard for Medicaid recipients to maintain. Medicaid patients have to continuously provide proof of income, and if a patient goes over the income limit, they lose coverage. This is a concept known as churning.”

Claim: 5.7 million undocumented immigrants might have voted in 2008 (wrong)

On a recent morning show, Fox co-host Ainsley Earhardt said of the 2008 election, “5.7 million – that’s how many illegal immigrants might have voted.”