The presidential debate between Hillary Clinton and Donald Trump on September 26 drew an audience of 84 million, shattering records. It was also a first for the Internet Archive, which made data publicly available, for free, on how TV news shows covered the debate. These data, generated by the Duplitron, the open source tool used to generate counts of ad airings for the Political TV Ad Archive, also is able to track coverage of specific video clips by TV news shows.

Journalists took these data and crunched away, creating novel visualizations to help the public understand how TV news presented the debates.

The New York Times created a visual timeline of TV cable news coverage in the 24 hours following the presidential debate, with separate lines for CNN, MSNBC, and Fox News. Below the time line were short explanations of the peaks and how the different networks varied in their presentations even when they all covered roughly the same ground. The project was the work of Jasmine C. Lee, Alicia Parlapiano, Adam Pearce, and Karen Yourish. For much of the day on Sept. 29, it was featured at the top of the New York Times website. 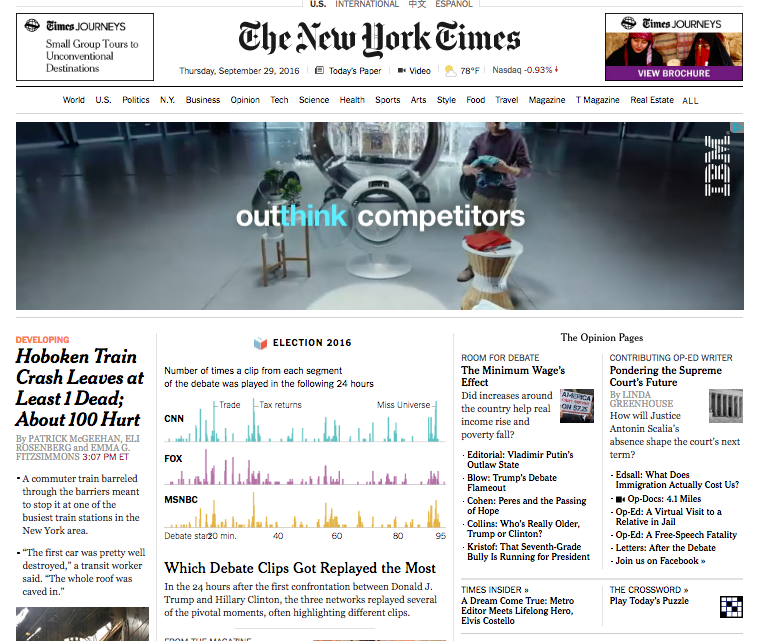 The Internet Archive will make similar data available on the upcoming vice presidential debate, as well as the remaining presidential debates. This effort is part of a collaboration with the Annenberg Public Policy Center to study how voters learn about candidates from debates.