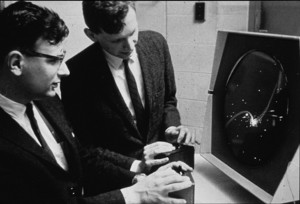 Like everything else in history, debate rages about when the “first” video game came into being.  Games and demonstrations such as “Tennis for Two” (1958), “NIM” (1951) and “Mouse in the Maze” (1959), played on million dollar equipment for the amusement and experimentation of limited audiences.

One contender in this group is “Space War!”, a 1962 collaboration of multiple students at the Massachusetts Institute of Technology. Playing off the cathode-ray tube of a Digital Equipment PDP-1 (of which less than 60 were sold), this two-player space-battle game has been lauded as a major advancement in computer gaming for over 50 years.

Now, it’s possible to play it at the Internet Archive.

As part of our larger Historical Software collection, there is now an entry for Space War! 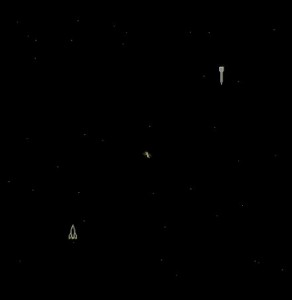 This entry covers the historical context of Space War!, and instructions for working with our in-browser emulator. The system doesn’t require installed plugins (although a more powerful machine and recent browser version is suggested).

The JSMESS emulator (a conversion of the larger MESS project) also contains a real-time portrayal of the lights and switches of a Digital PDP-1, as well as links to documentation and manuals for this $800,000 (2014 dollars) minicomputer.

You’re going to need a friend to play – the game requires two human players on the same keyboard. And don’t worry, everyone gets sucked into the star in the center the first few times. You’ve got to have your orbital dynamics down before you’re truly ready to be a space warrior.

With over a half-century of history behind it, Space War! still holds up as a great example of what would become a dominant form of media in the decades since – the space video game.

The Internet Archive continues to add more historical software frequently – bringing the computing past to the computer future. Stay tuned!