The event was a success, with resulting video and press. 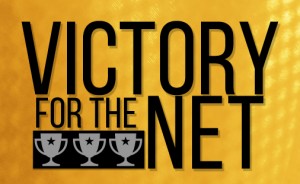 Dear Friend of the Open Internet,

FCC Chairman, Tom Wheeler, wants to do something monumental: reclassify broadband access providers under Title II of the Communications Act.

Translation: we’ve made huge progress in the fight to protect the Open Internet. And it’s time to celebrate!

The Internet Archive & Electronic Frontier Foundation invite you to VICTORY FOR THE NET! An evening of celebration, conversation, and sharing what’s next. The party will be Thursday, February 26 at the Internet Archive, 300 Funston Avenue, San Francisco, from 6-9 p.m.

The FCC still has to vote on Chairman Wheeler’s proposal and we don’t know the exact details yet. What we do know is that we’ve all worked hard to get the agency on the right track at last. We’re not done yet, but we have a lot to celebrate.

We are joining hands with our friends and co-hosts from:
Free Press, 18 Million Rising, Center for Media Justice–home of the Media Action Grassroots Network, Common Cause, Daily Kos, Demand Progress, Fight For the Future, Media Alliance, Progressive Change Campaign Committee, Public Knowledge, San Francisco Bitcoin, San Francisco Mayor’s Office of Civic Innovation, The Greenlining Institute, The Utility Reform Network and to take stock of how far we have come, and where we are headed in the movement to protect the Open Internet.

Hope to see you next Thursday! RSVP Today!

24 thoughts on “You are Invited to a Party: Victory for the Net”