This week we release new data generated by our Face-o-Matic tool, developed in collaboration with Matroid, adding to our list of public figures detected by facial-recognition on major cable news stations on the  TV News Archive.

In addition to President Donald Trump and the four congressional leaders, the expanded list now includes most former living presidents and recent major party presidential contenders, including Hillary Clinton and Barack Obama. (For the full list of public officials tracked, as well as methodical notes, see bottom of the post.)

Detecting faces on TV news and turning them into data provides a new quantitative path for journalists and researchers to explore how news is presented to the public and compare and contrast editorial choices that individual networks make. This new measure shows us the duration that politicians’ faces are actually shown on screen, whether it’s a clip of that person speaking, muted footage, or a still photo shown in the background to illustrate a point.

Adding to the Television Explorer, fueled by closed captions and our Third Eye chyron reading tool, a wealth of information is now available to analyze. (See the TV News Archive home page for examples of visualizations created by journalists and researchers using TV News Archive data.)

Download Face-o-Matic data to explore your own research questions.

1. Trump trumps every other political figure in face-time on cable TV news, all the time, every day, in every way, on every network and program.

As we’ve seen in past analyses with Face-o-Matic data, President Donald Trump is the major political star on cable TV news as compared to other top political figures examined. To put this in perspective: over a six month period stretching from November 2017 to May 2018, the president’s face appeared on TV cable news the equivalent of a full 13.5 days, counting every second of face-time. The next closest political figure we analyzed was House Speaker Paul Ryan, R., Wis., whose visage appeared the equivalent of one day. 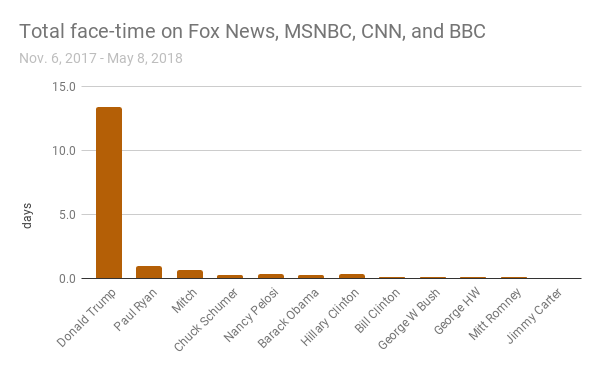 The two GOP leaders in Congress, Ryan and Senate Majority Leader Mitch McConnell, R., Ky. are the next most popular faces on TV news cable news networks. Between the two, Ryan ranks first on the TV news cable networks we examined: BBC News, CNN, Fox News, and MSNBC.  McConnell is the next most shown face on these networks, with the exception of BBC News. 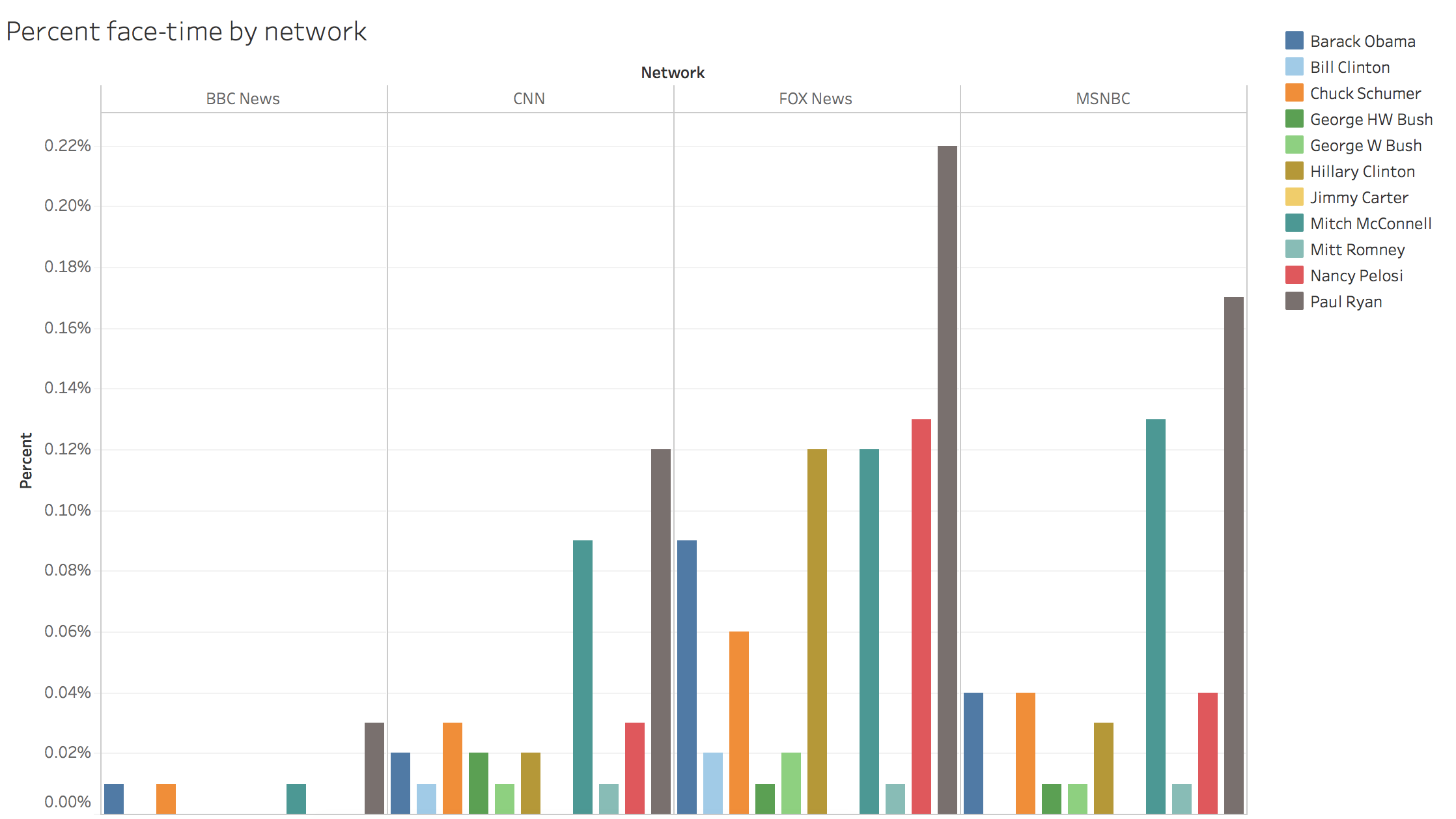 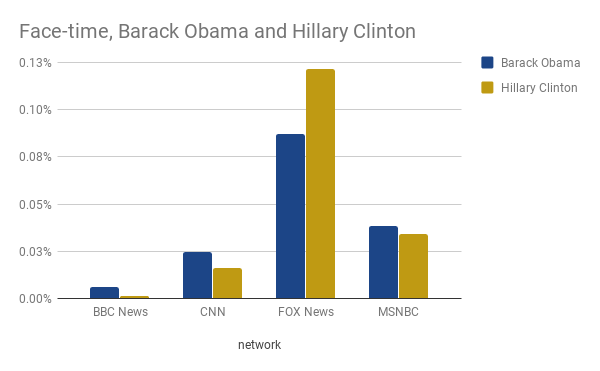 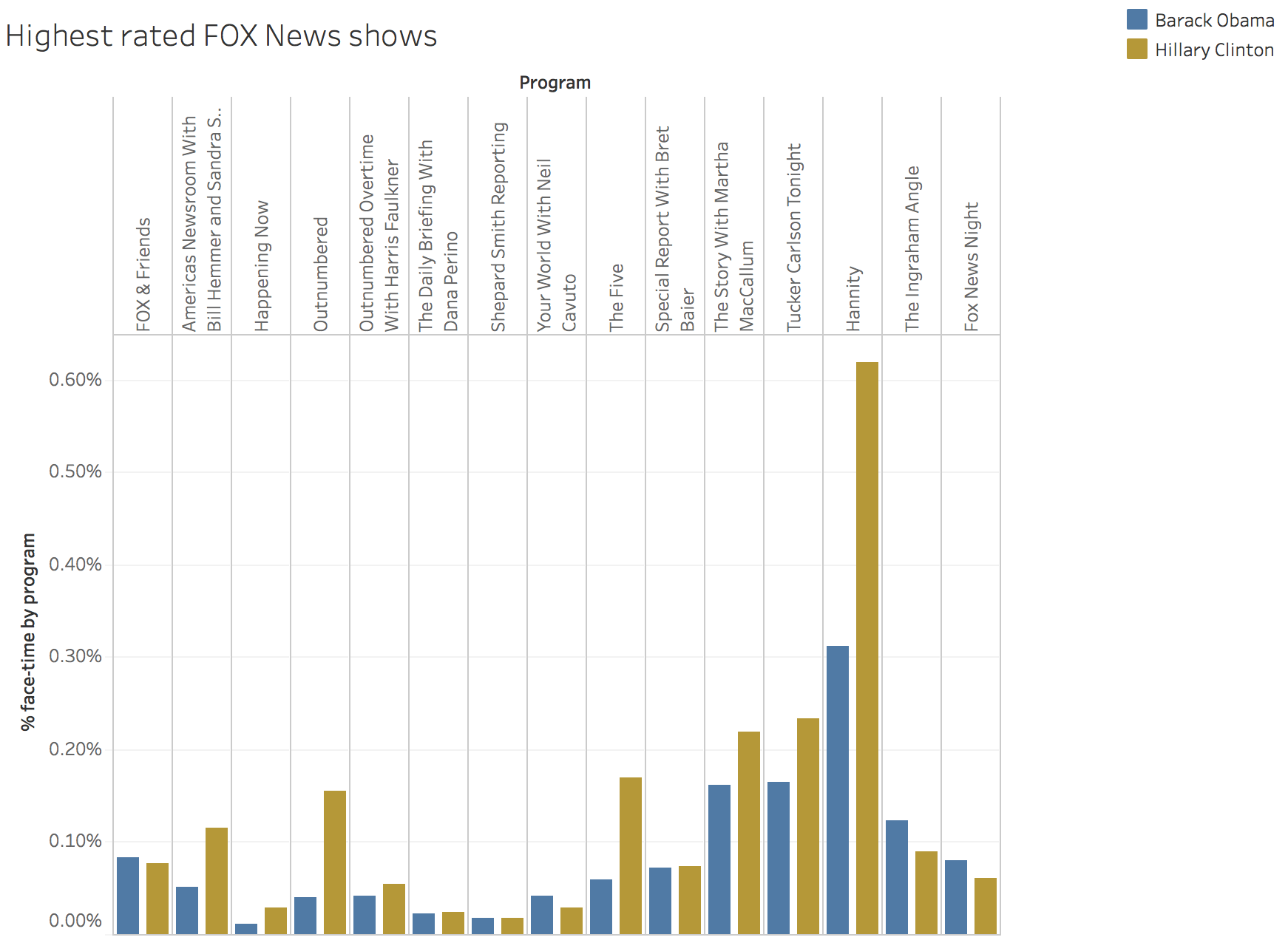 All three U.S. cable news networks examined showed high rates of face-time for Ryan on shows airing during morning hours, ranging from 9 am to 11 am. This may be linked to his leadership role in Congress and that morning hours are prime for large announcements. For example, on Fox News’ “America’s Newsroom” and “Happening Now” show spikes of face-time for Ryan. On MSNBC, “Live with Hallie Jackson” and “Live with Velshi and Ruhle” show high rates of images for Ryan. And on CNN, “At This Hour with Kate Bolduan” shows high rates of Ryan as well. 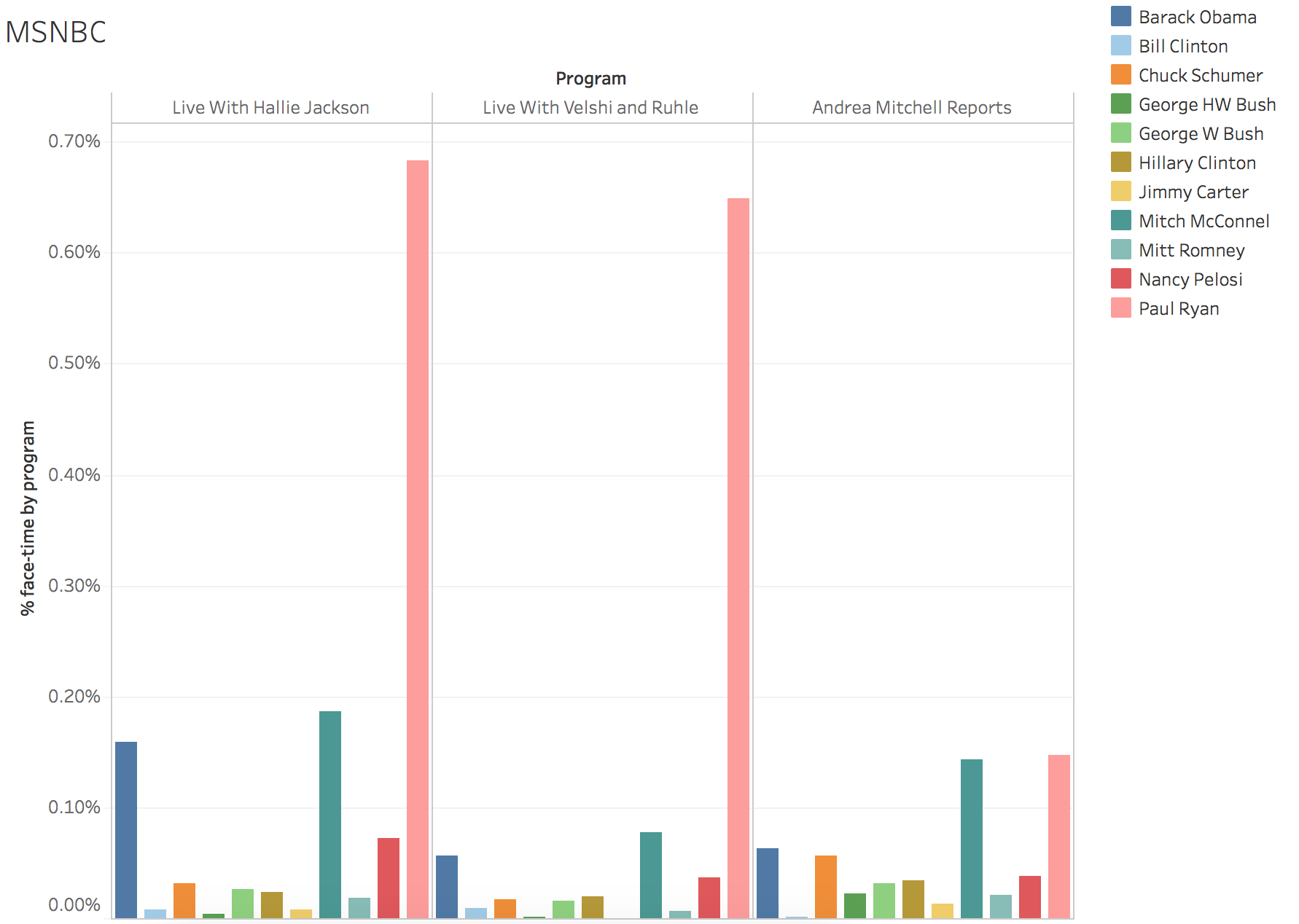 Links to interactive charts for top-rated news shows; view can be adjusted to exclude specific politicians. The source for top-rated shows is shows with 2017 top viewership by Nielsen. 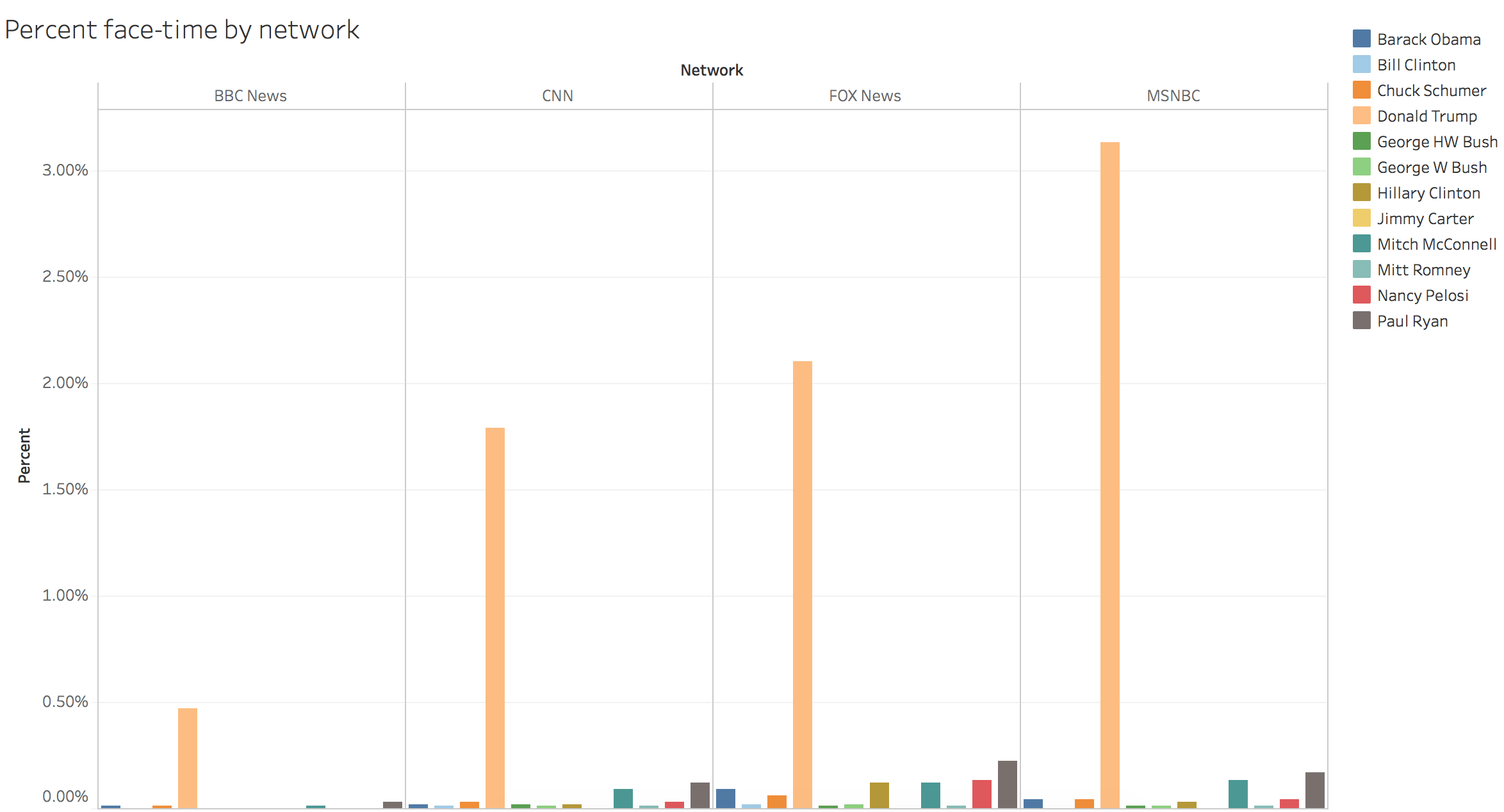 The Face-o-Matic data set, available for download on the Internet Archive, uses facial recognition to track the faces of prominent public officials as they appear on major cable TV news networks: BBC News, CNN, Fox News, and MSNBC. The list of public officials tracked, along with the date that detection began, is here:

*Note: Our data set does not include Sen. John McCain, R., Ariz., who ran for president opposite Obama in 2008. Sample testing of facial detection for the senator revealed a somewhat frequent rate of false positives  – instances where the identified face was not the senator’s, but rather one of a number of lookalikes. While we make no claim that all of the detections in the Face-o-matic data set are error free, we did test faces to minimize these. Please be sure to notify us if you find errors in the data.

This week, we demonstrate GOP and Democrat talking points on taxes; display a case of mistaken facial identity; and present fact checks on the GOP tax proposal.

Whoops, they said it again

These types of repeated phrases, often vetted via communication staff, are known as “talking points,” and it’s the way politicians, lobbyists, and other denizens of the nation’s capital sell policy. The TV News Archive is working toward the goal of applying artificial intelligence (AI) to our free, online library of TV news to help ferret out talking points so we can better understand how political messages are crafted and disseminated.

For now, we don’t have an automated way to identify such repeated phrases from the thousands of hours of television news coverage. However, searching within our curated archives of top political leaders can provide a quick way to check for a phrase you think you’re hearing often. Visit archive.org/tv to find our Trump archive, executive branch archive, and congressional archives, click into an archive, then search for the phrase within that archive.

Wait, is this former President George W. Bush trying out a new look?

No, it’s not. This is Bob Massi, a legal analyst for Fox Business News and host of “Bob Massi is the Property Man.”  In a test run of new faces for our Face-o-Matic facial detection tool, Massi’s uncanny resemblance (minus the hair) to the former president earned him a “false positive” – the algorithm identified this appearance as Bush incorrectly.

This doesn’t get us too worried, as we still include human testers and editors in our secret sauce: we’ll retrain our algorithm to disregard photos of Massi in the TV news stream. It does point toward why we want to be very careful, particularly with facial recognition, where a private individual may be tracked inadvertently or a public official misrepresented. Our concern about developing ethical practices with facial recognition is why, for the present, we are restricting our face-finding to elected officials. We invite discussion with the greater community about ethical practices in applying AI to the TV News Archive at tvnews@archive.org.

In our current Face-o-Matic set we track the faces of President Donald Trump and the four congressional leaders in their TV news appearances. After receiving feedback from journalists and researchers, our next set will include living ex-presidents and recent major presidential party nominees: Jimmy Carter, Bill Clinton, George H.W. Bush, George W. Bush,  Barack Obama, Hillary Clinton, John McCain, and Mitt Romney. Stay tuned, while we fine tune our model.

Fact-check: everyone will get a tax cut (false)

In an interview on November 7, on Fox News’s new “The Ingraham Angle,” House Speaker Paul Ryan, R., Wis., says: “Everyone enjoys a tax cut all across the board.”

Pulling in information from the Tax Policy Center and a tax model created by the American Enterprise Institute, The Washington Post’s Fact Checker Glenn Kessler counters Ryan’s claim: “In the case of married families with children — whom Republicans are assiduously wooing as beneficiaries of their plan — about 40 percent are estimated to receive tax hikes by 2027, even if the provisions are retained.”

Ryan changed his language, according to Kessler, following an inquiry on November 8 from the Fact Checker. Now he is saying, “the average taxpayer in all income levels gets a tax cut.”

Fact-check: tax bill not being scored by CBO as is tradition (false)

In an interview on November 12 on CNN’s “State of the Union,” Senate Minority Whip Dick Durbin, D., Ill., claimed that the GOP tax plan is “not being scored by the Congressional Budget Office, as it is traditionally. It’s because it doesn’t add up.”

“Under the most obvious interpretation of that statement, Durbin is incorrect. The nonpartisan analysis for tax bills is actually a task handled by the Joint Committee on Taxation, and the committee has been actively analyzing the Republican tax bills,” reported Louis Jacobson of PolitiFact.