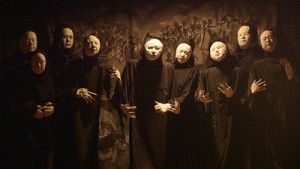 FIRE will be performed by the Bread and Puppet Theater in the Bay Area on Oct 7 and 9th. Photo Credit: ©Mark Dannenhauer

For the first time in fourteen years, artist Peter Schumann and the Bread and Puppet Theater will tour the West Coast, from Los Angeles to Seattle, with a series of performances, workshops, lectures, exhibits and parades. In the Bay Area from October 7-13th, Bread and Puppet Theater will be performing its original play, FIRE, which catapulted the company to international acclaim 50 years ago.

Founded by Peter Schumann in the early 1960’s, Bread and Puppet was enmeshed in the radical counterculture and earliest demonstrations against the U.S. involvement in Southeast Asia, becoming a familiar presence in the protest movement. Meanwhile, the puppets grew bigger and bigger—some up to 18 feet high—leading processions that spanned blocks and mobilized hundreds of people. Bread and Puppet became a seminal part of the avant-garde movement that included companies such as the San Francisco Mime Troupe, Living Theater and Robert Wilson. 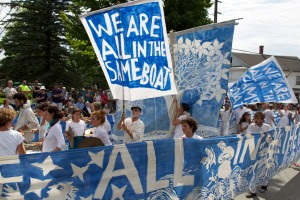 At a time when an economic divide threatens to tear San Francisco into the haves and the have-nots, Bread and Puppet brings its art and philosophy to everyone—from children to the elderly, artists to tech workers. Not only will members of the troupe lead a hands-on participatory workshop with local teachers and arts coordinators in the SF public schools, interact with theatre students at SF State, but they will also create free community events in San Francisco’s Dolores Park and the Tenderloin.

Bay Area supporters of the troupe’s accessible, radical art making can partake in a feast of events this October:

At the Internet Archive on Friday, Oct 9, come early for a reception and sale of the company’s “Cheap art” from 6:00 p.m.  At 7 p.m. we will be dedicating the  Bread & Puppet Archive with Internet Archive founder Brewster Kahle and filmmaker Dee Dee Halleck.  Thanks to Halleck’s generosity, the Internet Archive is preserving 150 hours of video of circuses, pageants, passion plays, 250 puppeteers, and making it available to the public.  You can stream Halleck’s documentary, compiled over many years, Ah! The Hopeful Pageantry of Bread and Puppet.  Then Peter Schumann, 81, will perform one of his famous Fiddle Talks, a once-in-a-lifetime chance to experience the philosophy of this visionary artist.  All this is leads up to a performance of FIRE.

“Humans wage war against each other and their own mother: Nature.  Essentially war is the ferocious stupidity that insists on the application of brutality for problem solution, whether the brutality is directed at humans or mountaintops.  “FIRE” is a chapel against war, where you sit down to witness the effects of war while contemplating its opposite.” 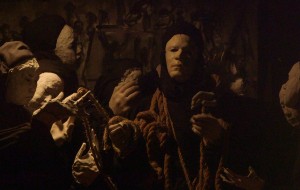 In 1965, Schumann and his troupe presented FIRE, a hard-hitting piece about the Vietnam War, to critical acclaim at the Nancy Theater Festival in France.  FIRE shows six days in a Vietnamese community, followed by a bombing raid and ending with a self-immolation. Dedicated to three Americans who immolated themselves in protest against the Vietnam War, FIRE is performed with life-size puppets that resemble their masked manipulators.

MORE ON BREAD AND PUPPET THEATER: 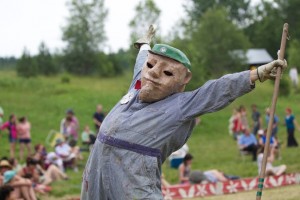 “We believe in puppet theater as a wholesome and powerful language that can touch men, women and children alike,” says Bread and Puppet Founder, Peter Schumann. “We hope that our plays are true and are saying what has to be said.” In 1963, Schumann started performing on New York’s Lower East Side with simple rod and hand puppet shows for children. The concerns of the first productions were rents, rats, police and the other pressing problems of the neighborhood. A dancer, sculptor and baker, Schumann starting baking and serving bread to his audiences.  As he notes in his Cheap Art Manifesto, “Art is food. You can’t eat it, but it feeds you.” Peter and his wife Elka called their work Bread and Puppet Theater. The name stuck.

Since 1974, Bread and Puppet has spun its magic from a farm in Vermont, with hundreds of apprentices guided by a philosophy of living and working within available means, making “cheap art” that is easily accessible to the people. This frugal ethos permeates Bread and Puppet’s aesthetic, inextricable from the paper-mache, burlap, twine and cardboard that literally hold the puppets and shows together.

Internet Archive founder, Brewster Kahle, and his wife Mary K. Austin experienced Bread and Puppet parades in the ’80s and 90s, and ten years ago they brought their family to Glover, VT to experience the artmaking in person.  The Austin-Kahles milked cows and created paper mache puppets.  They paraded as chickens in Bread and Puppet pageants.  “I’ve never seen anything like it:  tremendous art created in a communal way.  Bread and Puppet forged a practice grounded in New England thrift that permeates everything they do,” explained Kahle. “ I’ve been a supporter ever since.  When I heard they were coming West,  I saw it as a chance to plant the seeds for a new era of  radical theater and creativity in San Francisco.”

CHECK BACK AT THIS SITE AS WE ADD MORE BREAD & PUPPET EVENTS!