The Political TV Ad Archive launched on January 22, 2016, with the goal of archiving airings of political ads across 20 local broadcast markets in nine key primary states and embedding fact checks and source checks of those ads by our journalism partners. We’re now wrapping up this first phase of the project, and are preparing for the second, where we’ll fundraise so we can apply the same approach to political ads in key 2016 general election battleground states.

But first: here are some takeaways from our collection after logging 1,032 ads. Of those ads, we captured 263 airing at least 100 times apiece, for a total all together of more than 145,000 airings.

Donald Trump’s campaign won the only “Pants on Fire” rating awarded by fact checking partner PolitiFact for a campaign ad: “Trump’s television ad purports to show Mexicans swarming over ‘our southern border.’ However, the footage used to support this point actually shows African migrants streaming over a border fence between Morocco and the Spanish enclave of Melilla, more than 5,000 miles away,” wrote PolitiFact reporters C. Eugene Emery Jr. and Louis Jacobson in early January, when Trump released the ad, his very first paid ad of the campaign. The ad aired more than 1,800 times, most heavily in the early primary states of Iowa and New Hampshire.

Trump also won a “four Pinocchio” rating from the Washington Post’s Fact Checker for this ad which charges John Kasich of helping “Wall Street predator Lehman Brothers destroy the world economy.” “[I]t’s preposterous and simply not credible to say Kasich, as one managing director out of 700, in a firm of 25,000, “helped” the firm “destroy the world economy,” wrote reporter Michelle Ye Hee Lee.

Two other ads received the “four Pinocchio” rating from the Washington Post’s Fact Checker. This one, from Ted Cruz’s campaign, claims that Marco Rubio supported an immigration plan that would have given President Obama the authority to admit Syrian refugees, including ISIS terrorists. “[T]his statement is simply bizarre,” wrote Glenn Kessler. “With or without the Senate immigration bill, Obama had the authority to admit refugees, from any country, under the Refugee Act of 1980, as long as they are refugees and are admissible….What does ISIS have to do with it? Nothing. Terrorists are not admissible under the laws of the United States.”

This one, from Conservative Solutions PAC, the super PAC supporting Rubio, claims that there was only one “Republican helpful” who had “actually done something” to dismantle the Affordable Care Act, by inserting a provision preventing protection for insurance companies from losses if they didn’t do accurate estimates on the premiums in first three years of the law. “Rubio goes way too far in claiming credit here,” wrote Kessler. “He raised initial concerns about the risk-corridor provision, but the winning legislative strategy was executed by other lawmakers.”

Of the 25 fact checks done by PolitiFact, 60 percent of the ads earned “Half True,” “Mostly True,” and “True” ratings, with the remainder earning “Mostly False,” “False,” and “Pants on Fire” ratings. The Washington Post’s Fact Checker, the other fact-checking group that uses ratings, fact-checked 11 ads. Of these, seven earned ratings of three or four Pinocchios. A series of ads featuring former employees and students denouncing Trump University, from a “dark money” group that doesn’t disclose its donors, earned the coveted “Geppetto Checkmark” for accuracy. Those ads aired widely in Florida and Ohio leading up to the primaries there.

The ad that produced the most fact checks and source checks was this one from the very same group, the American Future Fund, for an attack ad on John Kasich. Robert Farley of FactCheck.org wrote, “An ad from a conservative group attacks Ohio Gov. John Kasich as an ‘Obama Republican,’ and misleadingly claims his budget ‘raised taxes by billions, hitting businesses hard and the middle class even harder.'” PolitiFact Ohio reporter Nadia Pflaum gave the ad a “False” rating; Michelle Ye Hee Lee of the Washington Post’s Fact Checker awarded it “Three Pinocchios.” The Center for Public Integrity described the American Future Fund as “a conservative nonprofit linked to the billionaire brothers Charles and David Koch that since 2010 has inundated federal and state races with tens of millions of dollars.”

This ad from Donald Trump’s campaign earned a “Pants on Fire” rating from PolitiFact.

2. Super Campaign Dodger, and other creative ways to experience and analyze political ads. Journalists did some serious digging into the downloadable metadata the Political TV Ad Archive provides here to analyze trends in presidential ad campaigns.

The Economist mashed up data about airings in Iowa and New Hampshire with polling data and asked the question: Does political advertising work? The answer—”a bit of MEH” (or, “minimal-effects hypothesis”)—in other words, voters are persuaded, but just the littlest bit.

Farai Chideya of FiveThirtyEight and Kate Stohr of Fusion delved into data on anti-Trump ads airing ahead of the Florida primary—which Trump went on to win handily, despite the onslaught.

Nick Niedzwiadek plumbed the collection when writing about political ad gaffes for The Wall Street Journal. Nadja Popovich of The Guardian graphed Bernie Sanders’s surge in ad airings in Nevada, ahead of the contest there.

William La Jeunesse of Fox News reported on negative ads here. Philip Bump of The Washington Post used gifs to illustrate just how painful it was to be a TV-watching voter in South Carolina in the lead up to the primary there.

And in what was the most interactive use of the project’s metadata, Andrew McGill, a senior associate editor for The Atlantic, created an old-style video game, where the viewer uses the space key on a computer keyboard to try to dodge all the ads that aired on Iowa airwaves ahead of the caucuses there. For links to other journalists’ uses of the Political TV Ad Archive, click here.

via GIPHY
3. Candidates’ campaigns dominated; super PACs favored candidates who failed. In our collection, candidates’ official campaigns sponsored the most ad airings—63 percent. Super PACs accounted for another 27 percent, and nonprofit groups, often called “dark money” groups because they do not disclose their donors, accounted for nine percent of ad airings.

Bernie Sanders‘ and Hillary Clinton‘s campaigns had the most ad airings—29,347 and 26,891 respectively. Of the GOP candidates, who faced a more divided competition, it was Marco Rubio’s campaign that had the most airings—11,798—and Donald Trump was second, with 9,590. However, in the Republican field, super PACs played a much bigger role, particularly those advocating for candidates who have since pulled out of the race. Conservative Solutions PAC, the super PAC that supported Marco Rubio in his candidacy, showed 12,851 airings; Right to Rise, which supported Jeb Bush, had 12,543.

This pair of issue ads sponsored by the AARP (aka the American Association of Retired People), aired at least 9,653 times; the ads focus on social security and have been broadcast across the markets monitored by the Political TV Ad Archive.

The biggest non-news shows that featured political ads were “Jeopardy!,” “Live With Kelly and Michael,” and “Wheel of Fortune.” Fusion did an analysis that showed that the most popular entertainment shows targeted by presidential candidates and mashed it up with Nielsen data about viewership. For example, Bernie Sanders’ campaign favored “Jimmy Kimmel Live,” while Hillary Clinton’s campaign likes “The Ellen Degeneres Show.”

The Political TV Ad Archive–which is a project of the Internet Archive’s TV News Archive–is now conducting a thorough review of this project, which was funded by a grant from the Knight News Challenge, an initiative of the John S. and James L. Knight Foundation. The Challenge is a joint effort of the Rita Allen Foundation, the Democracy Fund, and the Hewlett Foundation.

Stay tuned for news of the Political TV Ad Archive’s plans for covering future primaries in California, New York, and Pennsylvania, and beyond, our fundraising for the second phase of this project: fundraising to track ads in key battleground states in the general elections.

This post is cross posted at the Political TV Ad Archive. 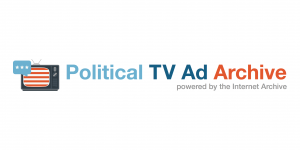 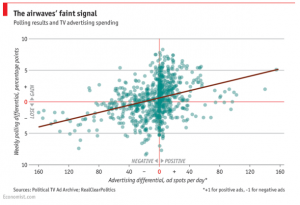