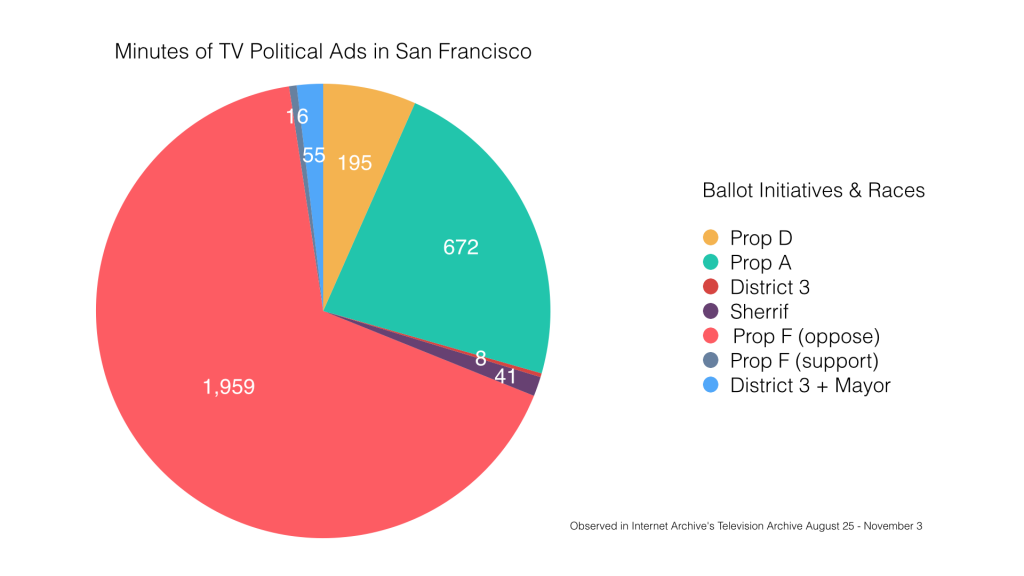 For every one minute of political ads aired in favor of a contentious ballot initiative intended to further regulate Airbnb’s growing presence in the city where it is headquartered, more than 100 minutes of ads urging them to vote “no,” have aired on local San Francisco area TV stations, according to an assessment of the Internet Archive’s television archive.

Audio fingerprinting of YouTube-hosted advertising was used to identify the same ads in local station programming and cable news networks available in the region, from August 25th through October 26th.  Sample ads can be viewed here, and metadata about their occurrences can be downloaded from this page.

Proposition F, which is backed by a coalition of unions, land owners, housing advocates, and neighborhood groups, would restrict private rentals to 75 nights per year as well as enact rules that would ensure that hotel taxes are paid and city code followed. It would also allow private party lawsuits by neighbors against private renters suspected of violating the law.

The Internet Archive found just one TV ad favoring the initiative, also appeared on the Proposition F campaign website. The Archive discovered 32 instances of this ad airing on local TV stations, for a total of 16 minutes of airplay. However, the ad, which features a parody of the song “Hotel California,” by the Eagles, (the lyrics were replaced with “Hotel San Francisco,”) was recently removed from the official website because of a claim of copyright infringement.

In contrast, in our sample range, Airbnb supporters aired more than 26 hours of ads against the initiative. One example ad, which is below, claims that the initiative would “encourage neighbors to spy on each other,” and “create thousands of new lawsuits.” This ad played at least 358 times in recent weeks, for a total of 179 minutes of airtime.

Over all, according to reports filed with the San Francisco Ethics Commission, opponents of Proposition F have reported spending $6.5 million compared to $256,000 from organizations supporting the initiative.

Of course the ad campaigns are not just limited to television. Airbnb apologized last week after it caught flack for a series of controversial bus stations and billboard ads that critics called “passive aggressive” and “whiny,”  for complaining about how public institutions, such as libraries, spent their tax revenue-derived budgets.

But TV remains a key way that political operators try to influence voters. As Nate Ballard, a Democratic strategist recently said on a local newscast: “That’s how you win campaigns in California, on TV.”